A Filipino woman is hiding after learning she is supposed to be deported over claims of flouting immigration rules in the country.

Ms Gala Liane Beth is missing since August 29, 2020 when she was to be deported to the Philippines for flouting Immigration rules. Her employer in Japan who she had a contract with in Kenya had reported her to the Directorate of Criminal Investigations claiming she had not remitted their Sh40 million she had obtained after selling their assorted cars.

Ms Beth had come to Kenya in February 2019 as a purchasing and shipping manager with motor dealer Orange Garage PTE Limited in Nairobi. While in Kenya, she resigned from Orange Garage and formed Mottospot Limited and started to liaise with Japan based World Navi Company Limited in getting vehicles from Japan and selling them in Kenya. She however terminated her contract with World Navi on April 1, 2020.

“On 1 April 2020 you served our client with one month’s employment termination notice indicating that you would cease being our client’s employee.”
“This was after you had blatantly breached the oath of confidentiality by stealing and selling our client’s customer database and pricing system to IBC Auto who is our client’s competitor,” said lawyer Paul Mwangi for World Navi.

The firm also reported the matter to the DCI complaining about her conduct.

World Navi wrote to the immigration informing them she had resigned from the agency saying she had left on April 30, 2020 saying they were not responsible for her presence in Kenya.

Director Stanley Makombe said they are still hoping she would be deported to face justice in her country as per the immigration rules.

“We still hope to see her answer to her case. She defrauded a company of millions of shillings,” he said.

It was on the strength of the complaint to the immigration that Ms Beth’s work permit was canceled. She was declared a persona non grata. According to immigration officials, was in August detained for deportation and she promised to buy her own ticket and leave after being tested for Covid-19 pandemic.

“Instead, she bought a ticket and left for Tanzania where she stayed for a month before coming back to Kenya. We understand she is somewhere in Mombasa,” said an official aware of the probe.

When she arrived back, she had a new Philippine passport showing it would expire in 2030. She is yet to be found. Our efforts to reach her were futile as her mobile phones had been switched off.

Director General of immigration Alex Muteshi said Ms Beth should not engage in any business in Kenya. 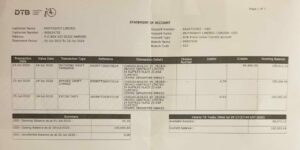 Central Bank of Kenya is also investigating how and why she received Sh10 million from Singapore in July. The money is being held at their DTB Bank account as the probe on possible laundering goes on.