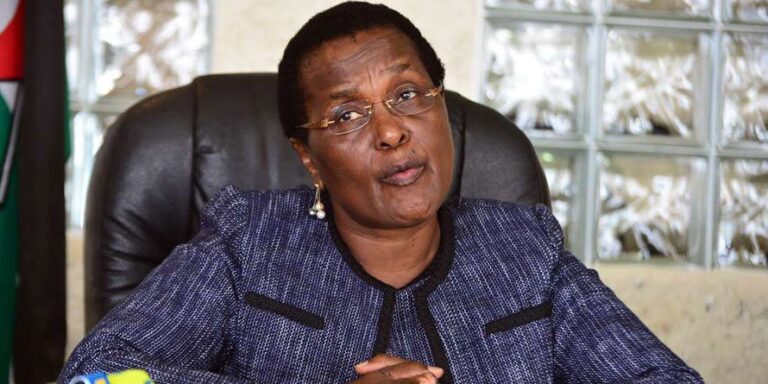 In our continuing series, Seaman Lobby Group in a letter addressed to Ethics and Anti-Corruption Commission Integrity Centre (EACC) and copied to Kenya Insights, Integrity issues have been raised about the Principal Secretary Fir Shipping and Maritime Nancy Karigithu in her capacity as the Acciunting  Officer of Kenya Maritime Authority (KMA) in 2014 where she’s accused of overseeing a corrupt procurement of the new KMA Headquarters land under Tender Number KMA/LAN/ONT/005/2014-2015.

Belowbis a statement from the lobby group that accused her addressed to EACC’s boss Twalib Mbarak;

I refer to the subject matter and various public allegations.

I, Ahmed Mabrouk, the Founder and Coordinator of Macho ya Baharia Lobby Group, Mombasa; pursuant to Article 3(1) of the Constitution and in exercise of the Freedom of Expression guaranteed under Articles 33 of the Constitution; invoking the protections guaranteed under Section 65 of Anti- Corruption and Economic Crimes Act (Cap 65); hereby formally submit to you a Complaint Concerning Corrupt Conduct by Nancy Karigithu, the current Principal Secretary of Shipping transportation under Ministry of Transport.

Nancy Karigithu was the long-serving Director General/Accounting Officer of Kenya Maritime Authority (KMA) when under tender no. KMA/LAN/ONT/005/2014-2015, she oversaw procurement of the land on which sits the new KMA headquarters, in a procurement process replete with corruption in contravention procurement laws and other applicable laws, in the following instances:

(b) Nancy Karigithu failed to conduct the required diligence before purchasing the said land leading KMA to pay Tile & Carpet Centre Ltd over Sh. 200 million, for a lease that now stands at 44 years, reducing.

(d) Nancy Karigithu failed to keep (or, it is alleged she confiscated/destroyed) important records pertaining to the land purchase.

(h) Nancy Karigithu signed the Agreement with Tile & Carpet Centre Ltd as a witness and not as the KMA Accounting Officer.

In brief, information availed to us shows that during the vicious war (2016 – 2018) between Nancy Karigithu (who was PS Shipping and Maritime but then not in charge of KMA) on one side and the KMA Board of Directors on the other side, Nancy Karigithu instigated the audit of KMA by requesting the PS for the State Department for Transport (who was then in charge of KMA) to cause the audit of KMA. PS Transport wrote to the Inspector General of State Corporations vide letter Ref. MOT&I/C/SM/015VOL dated 17th July 2017, requesting the State Corporations Advisory Committee (SCAC) to audit KMA.

As fate would have it, in a classic case of “hunter becomes the hunted”, the Audit Report fingered Nancy Karigithu (the audit instigator) for being responsible for loss of millions of public monies in the December 2014 procurement of the KMA headquarters land. (See ANNEX I: copy of the SCAC the Auditor’s Report and ANEX II: copy of the initial “transmittal letter”, both documents sent on 9th February 2018 by SCAC’s Margaret Chebii: margiekip@yahoo.com to Titus Muriithi: tmuriithi59@yahoo.com, the immediate former Inspector General of State Corporations).

Macho ya Baharia Lobby Group have obtained a heavily redacted copy of letter ref. ISC/INS/POL/101/TY (13) dated 9th January 2018 which was intended to communicate the Audit Report and findings and recommendations to PS for the State Department for Transport, who had requested for the audit. (See the enclosed ANNEX III: copy of the heavily redacted letter ref. ISC/INS/POL/101/TY (13) dated 9th January 2018)

The letter heavily redacted letter contains recommendation “x” that states thus:
The Parent Ministry should take appropriate disciplinary action against Mrs. Nancy Karigithu, for negating her responsibility as an accounting officer at time of the execution of the land sale-agreement by signing as a witness contrary to Section 7(c) of the Public Procurement and Disposal Regulations of 2006.

Macho ya Baharia Lobby Group understand that both the Auditor’s Report and the transmittal letter were altered to remove any negative references to and allegation of corruption by, Nancy Karigithu. A cursory scrutiny of the heavily redacted letter indicates that the immediate former Inspector General of State Corporations Mr Titus Muriithi (who has since been charged by ODPP in the Kimwarer and Arror dams scandal) had signed the initial letter – with the recommendation for disciplinary action to be taken against Nancy Karigithu – before changing his mind.

Notwithstanding the attempt by the immediate former Inspector General of State Corporations to ‘sanitise’ Nancy Karigithu, Macho ya Baharia Lobby Group expect EACC to conduct independent investigation into the present Complaint Concerning Corrupt Conduct by Nancy Karigithu. As such, the SCAC Audit and its findings and recommendations should be treated only as indicative of corruption that warrants EACC investigation.

So, is Nancy Karigithu ‘untouchable’? Maybe. Macho ya Baharia Lobby Group have obtained an unflattering audio recording of a conversation between Nancy Karigithu and an acquaintance, where Nancy Karigithu is bragging to that acquaintance that she (Nancy Karigithu) is “very powerful” and alleging that she is “protected” at the highest levels. This is wrong because we do not imagine Government – at any level – condones corruption or protects corrupt State/Public officers. (Please let us know whether the said audio recording may be of help to you, since now you may wish to ascertain whether Nancy Karigithu has been executing her duty(ies) under the dictates of Chapter Six of the Constitution and the Leadership and Integrity Act, 2012)

In conclusion, therefore, we believe this letter has established and communicated to you a prima facie valid Complaint Concerning Corrupt Conduct by Nancy Karigithu under tender NO. KMA/LAN/ONT/005/2014- 2015, which warrants immediate investigation(s) by EACC.

Please note, in the event that EACC is unable to commence investigation(s) by 1st July 2020, Macho ya Baharia Lobby Group will, as the next recourse in pursuit of justice for the people of Kenya, petition:

(a) The Commission on Administrative Justice, to inquire into the Complaint Concerning Corrupt Conduct by Nancy Karigithu; and

(b) The National Assembly Departmental Committee on Transport, Public Works and Housing, to censure Nancy Karigithu.

We look forward to expedited investigations into Complaint Concerning Corrupt Conduct by Nancy Karigithu in order to bring justice to the Kenyan people.

We commend you for EACC’s recharged impetus in the fight against corruption.

Kenya Insights allows guest blogging, if you want to be published on Kenya’s most authoritative and accurate blog, have an expose, news TIPS, story angles, human interest stories, drop us an email on tips.kenyainsights@gmail.com or via Telegram
Related Topics:Ethics and Anti-corruption Commission (EACC)Nancy KarigithuPRINCIPAL SECRETARY FOR SHIPPING AND MARITIMESEAMAN LOBBY GROUPTwalib Mbarak
Up Next