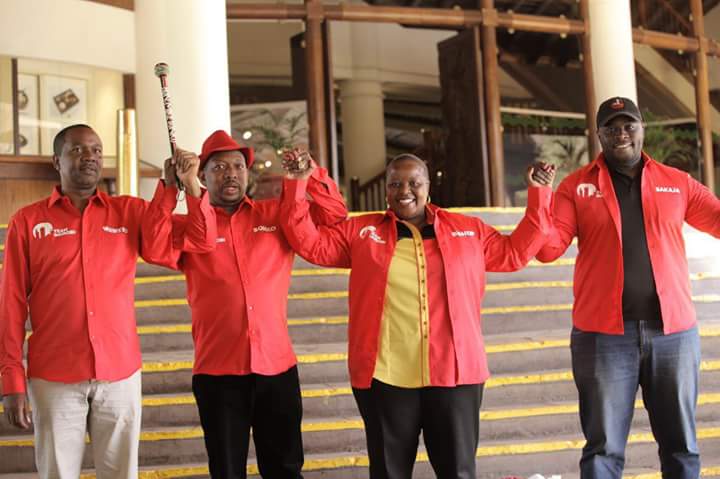 I was at the Nasa/Cord event at the Bomas where the opposition leaders gathered to make serious steps towards realizing a united front to challenge Jubilee in the coming August polls. Two days later I attended the Jubilee event at the Kasarani stadium where the aspirants gathered in the launch of the party’s membership smart card.

The two events presented nothing extraordinary of the country’s tribal politics and greed to keep or ascend to power, the contents of the two events would only find a better place in the gutter press or a gossip rag, so KI did not report on them.

Jubilee was simply reacting to shock waves presented by a possible united opposition and their thirst to topple ODM/opposition from Nairobi’s top job by whatever means necessary. Speaker’s at the event like the dismally performing Nairobi Women rep. Rachel Wambui Shebesh pulled the unwanted tribal card. She claimed that Nairobi should be accommodative to other tribes too. What are other tribes too and which tribe is disadvantaging other tribes in Nairobi?

Anyway, she is basic and was simply referring to a tribal calculation that would divide opposition votes for the Nairobi gubernatorial race to at least open a window to beat the incumbent, Dr. Evans Kidero. She can’t say the same about the presidency that is in a way rotating between tribes or one tribe back to back.
Jubilee gubernatorial aspirants announced at the event that they had settled on a negotiated democracy to produce a candidate that would face ODM’s Kidero.

Kidero is the man to beat, and his party has also made it clear through it’s Nairobi branch chairman George Aladwa.He said that the party will allow Kidero defend his seat unopposed (within the party, no nominations). Kidero has been faulted for doing the shoddy job and administered corruption. He has amassed so much wealth within his short term just like other jubilee operatives that he’s become uncontrollably too powerful. Kidero has so much money that removing him from power is not a lick of honey; he’s deeply rooted that Jubilee has spent sleepless nights on how to get him off the seat that controls half of Kenya’s GDP. Miguna baptized him the Dean of corruption.

Sometimes the difference between ODM and Jubilee is the same. ODM Party Leader Raila Odinga is a renown king of endorsing and forcing candidates on the electorate. Jubilee has a borrowed a leaf and as much as they are preaching about free, fair, just and credible nominations to be conducted by IEBC, many speakers’s at their event urged other aspirants in 46 counties to copy the Nairobi example.

Days after the event its was clear, Kenya Insights sources privy to Jubilee have learnt that former Gatanga Mp Peter Keneth will be given the gubernatorial ticket, other aspirants like Mike Sonko will defend his Senate seat, Dennis Waweru, a bitter and weak candidate who thought he’d walk his way to the helm quickly has learnt the political dynamics hard way and chocking swallowing his pride will slice his ego and defend his parliamentary seat which he also stands slim chances given his pathetic track record in development.

Sakaja who had bigger ambitions than his status and thought he’d break the power walls with a catfight and learnt the rocky way to humble down will be given a president advisor job and Bishop Magret Wanjiru (BMW) with her small degree and street mentality, the fraud bishop with garbage development record and heap of scandals including National Housing Corporation where she’s alleged to have stolen two houses, the masters pursuant with no idea of what a dissertation is, will get a CS job.

Wamalwa, therefore, will remain Water CS, even though reliable Intel indicates he would be going for Trans Nzoia gubernatorial even though he made the announcement, the stand is yet to be affirmed as February deadline approaches and in an attempt to divide opposition vote, former Town Clerk Philip Kisia will deputize PK. Kenya Insights is reliably informed by Jubilee power circles that the anointed candidate for the governorship is PK since his brand is appealing across and easily saleable.

Related Content:  Report Shows 800K Ghost Voters Exists In The IEBC Register, Chiloba's Interests And Why KPMG Did Nothing

We gather the other contestants are only piling pressure and buying time forming a cosmetic unity for the simple reason of increasing their bargaining power. Someone like Sonko we’re told is asking up to Sh.1B to withdraw his candidature. But if Uhuru withdraws his support from the Senator he stands a clear chance losing both Senate and gubernatorial. In previous elections Sonko scored 600K votes and Uhuru 400K the excess 200K which Sonko got from Kamba vote is what he’ll be left with, with the elections set to be tribal, he stands minimal chances. His only choice, towing the line or be outpaced.

For ethnic balancing, Shebesh who’sa Kikuyu won’t be going for Women Rep as Kenneth is on the race, Rachel who has close to nothing to show for her stay in the helm of power has been poised to contest did a parliamentary seat that is yet to be unveiled and most probably a Senate nomination. Shebesh will delegate her seat to Millie Omanga ,Nairobi’ s most famous MCA walking around with bank notes abdbus said to be using her big posterior as her bargaining tool. Being a Kisii,Omanga is negotiated to be the next women rep.

Negotiated democracy is not suitable for development; it offers an opportunity for party chiefs and dictators to crash other aspirants dreams as they award their die-hard sycophants with roles they can’t play. Awarding sycophants and friends gave this country the worst, incompetent and sleeping ministers like Joseph Ole Lenku who was picked straight from the kitchen to head interior docket. He only saw a burning mattress in his short stint.

Related Content:  Gloves Off: Uhuru Dares Ruto To Resign Instead Of Castigating The Government From Within

But in this case, negotiated democracy from both Jubilee and Cord will leave Nairobi electorates with corruption-tainted leaders to choose from. Other than crippling Mumias sugar company, Kidero has been accused of massive corruption in Nairobi and bribing the Supreme Court judge, Philip Tunoi with SHS 200 million to rule in his favor in a petition case.

PK is tainted too, an independent candidate in the gubernatorial race and Raila’s former aide Miguna Miguna in a tweet said that he has high voltage information linking Peter Kenneth to corruption. The aspiring governor claims Peter Kenneth is not as clean as Kenyans may think.“To my brother @Peter_Kenneth, welcome to the 2017 Nairobi gubernatorial race. I’m going to open your corruption files soonest”.

His stint at the KFF has been described as deplorable, and while at the helm at Kenya Re, the soft-spoken PK nearly sold it to Monarch Insurance and Zimbabwe Reinsurance Corporation. This guy who rose to fame while dating former Aldai Mp Sally Kosgei was stopped by a court order and protesting opposition MPs.

The negotiated democracy still leaves Nairobians with Sonko for a senatorial position, despite his pathetic behavior, arrogance, and use of graphic language in public or Senate chambers. His name also featured in the famous list of fame where that included 175 corrupt government officials.

Voters Importation Tops Nairobi’s And Other Counties’ Winning Strategies, Sh.400M Set Aside For The Dirty Exercise