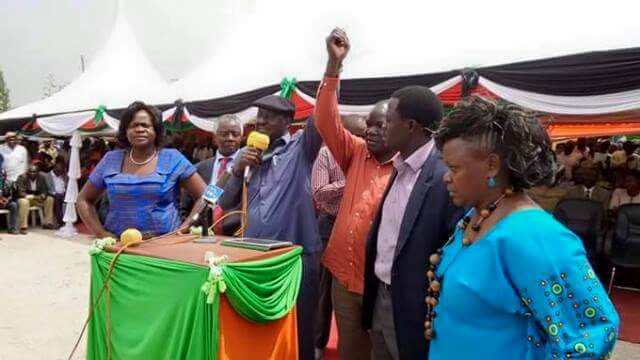 By Nicholas Olambo
With the general election just seven months away, the incumbent and the would be opposition candidate or candidates are working hard to put their houses in order and clinch the victory. Raila Odinga who has contested the presidency three times and lost is most likely to be on the ballot again.

What is he doing in preparation for this? The ODM Party Leader is playing village politics endorsing candidates in places where he is not even a voter. This is not the first time, the king of double speech in known for the vice. It paints an accurate picture of him as a man who is selfish, he cares about his interest and not the interest of the people.

Endorsing unpopular candidates before nominations is nothing but forcing candidates on the electorate where he has strong following. These endorsed candidates are mostly his robust and die-hard sycophants; they don’t serve the interest of the people but instead become flower girls and ‘prefects’ who defend ‘Baba’ at whatever cost.

He recently endorsed Kasipul Mp Oyugi Magwanga who is eying the Homa Bay County gubernatorial position in the coming elections. Though Magwanga has a track record of proper management of CDF funds in his constituency more than any other Mp in the region, the two-term lawmaker has never uttered even a word in parliament.

The Homa Bay gubernatorial race is expected to be tough; aspirants are burning the midnight oil to unseat Cyprian Awiti who has been accused of dismal performance and corruption. Homa Bay is one of those places where having Raila Odinga’s ODM ticket is as good as winning the seat.

What does it mean with the Party Leader endorsing candidates? There will be no nominations; they will pretend by putting up a formality exercise which will be a sham when the ticket has already been sold to the highest bidder. Odinga has reduced lawmakers from Luo Nyanza to his bootlickers, someone should introduce some antidote to ‘Odingaism.’

He is accusing Jubilee/IEBC of not allowing a leveled playground ahead of the coming polls when he is evidently doing the same within his party. He is dictating who is to become the branch chairperson, where Senator should come from, a governor and even sweepers. In fact, in Homa Bay County he is taking the electorate from Suba regions for granted. His endorsements in 2007 and now do not favor candidates from Suba.

Suba has produced some of the best leaders in Kenya, Tom Mboya who was is father’s rival in Luo Nation came from Rusinga Islands in Suba. The young TJ Mboya championed well thought out education programs that benefited the likes of Barack Obama Snr, father of the outgoing US President Barrack Obama. He did these when Jaramogi Oginga was politicking round the clock.

Right now one of the strongest candidates to challenge the incumbent Awiti is Sammy Wakiaga from Rusinga, Suba. Wakiaga is a former NSIS official and a reknown philanthropist who has also put up a number development projects in Homa Bay. The stiff competition would be between Awiti, Wakiaga, and Magwanga but unfortunately, Agwas has his preferred candidate where he is not a registered voter.

He is fronting for individuals who will lick his boots and play cheap politics at the funerals for an entire five-year term. No one should select a governor for the people of Homa Bay County, it is their democratic right to elect the people they believe are best fit to serve then. A governor should not be a party chief bootlicker or servant.

Negotiated Democracy: Opportunists At Large, How Jubilee Candidates Will Share Power In Nairobi As They Combine Forces To Dethrone Kidero