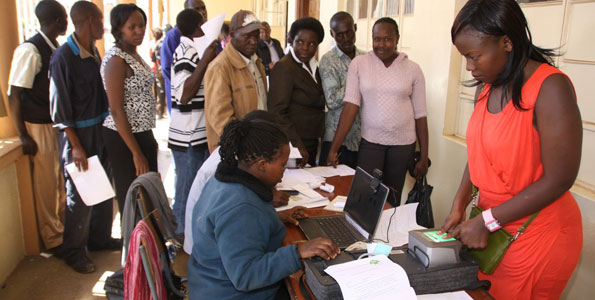 The battle lines have been drawn, and it’s no doubt August polls are going to be a do or die affair for the significant political divides. Like any other election, they are going to be tribal of course, but 2017 presents a different scenario where ‘tyranny of numbers myth’ may be obsolete. The believers in the myth are not old dogs; they still have more dirty tricks up their sleeves to roll out.

Nairobi gubernatorial position currently held by the opposition (ODM/Cord) is going to be fiercely fought. Jubilee badly needs this seat. In working out ways to acquire the numbers to trounce opposition, the ruling party has resorted to ‘voter importation’ in the just kicked out mass voter registration exercise by the IEBC.

Politics is a game of numbers they say, sources close to KI have revealed that voters are being ferried from Counties neighboring Nairobi to register in an attempt to get the numbers to unseat Governor Evans Kidero. Jubilee top brass has over the time said that they must win Nairobi top job come rain or shine.

It’s said that through boardroom arrangements they have settled on former Gatanga Mp Peter Kenneth as their candidate to face off with Kidero. To give life to the pathetic political career of PK who is JP’s sacred cow, hundreds of thousands of voters are being brought in from outside to register as voters. This is not the first time this kind of electoral malpractice is witnessed, last year during a similar registration exercise the same happened when strangers were brought in a bus to register as voters in Kariobangi causing chaos as residents resisted.

Now politicians will tell you that elections are won way before the elections day, and this is one way how. Politics is a dirty game, big boys can get away with murder in light of the day, tribal chiefs, party leaders and their sycophants will lie to you that Nairobi should accommodate other tribes as well when they treat other tribes as second citizens.

This is nothing but ‘raping democracy,’ voters can not be imported from elsewhere to sway decision and silence the voice of the residents. Candidates have been imposed on Nairobians from outside, proven weak and dumped to either keep their day job or go back upcountry and vie there, say Eugine Wamalwa.

The electorate in Nairobi is taken for a ride and being thrown in dirty political trick bags. People should stand and resist this, it’s unfortunate that we are living in times when we have ‘commercial activists’ and the few real ones who would be left have been swallowed in tribal cocoons. The next governor of Nairobi may not reflect the voice of Nairobians.

Why I Want To Be The Next Starehe MP, Activist Boniface Mwangi Explains Motivation Behind Him Joining Politics

Negotiated Democracy: Opportunists At Large, How Jubilee Candidates Will Share Power In Nairobi As They Combine Forces To Dethrone Kidero