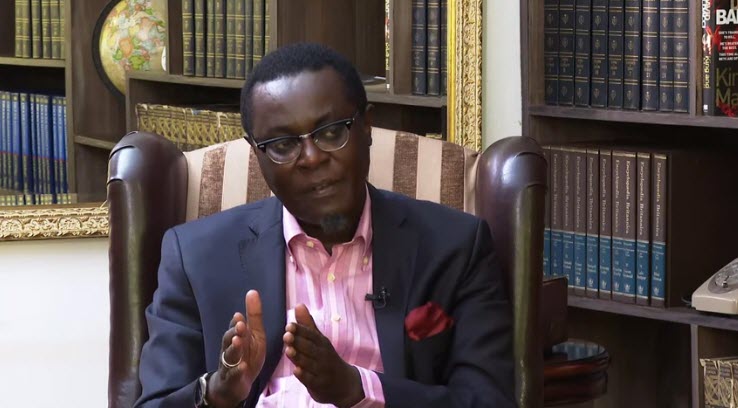 Debate on who’s going to be Kenya’s 5th President continues to dominate the political discussions and shows in Kenyan media. As BBI rallies continue to take shape with countrywide campaigns, many are viewing this as a campaigning strategy for 2022 when the general elections will be held.

While many presumed presidential candidates are yet to put an ink on their template, DP Ruto has made it crystal clear that he’ll be going for the country’s top seat to take over from his partner Uhuru.

Uhuru and Ruto both of whom are Jubilee Party partners, have not been enjoying close ties as they did in the back years. Writings on the wall read that the two are in the verge of a fierce breakup which has been in the oven.

While appearing on K24’s Punchline show, seasoned political analyst Mutahi Ngunyi dives into the discussion with Anne Kiguta on whether the DP could be the country’s next President. In his reply, Mutahi said he won’t, “Ruto is my friend, extremely generous…When you see these Kikuyu MPs around him, its because he is generous. But as I have said, you can hire a Kikuyu but you can never buy one. He will not become President in 2022 but one day he will become President.”

He goes further to say, “Ruto will never be the President, he will be made a president. The problem with Ruto is that he advises himself. He needs to look for a mentor.”

In his analysis, Mutahi believes the country’s next president is a boardroom choice of the deep state who’re working day and to ensure Ruto doesn’t become the President. While the DP has been complaining of politicians allied to him being discriminated against in what they claim is biased prosecutions more so on corruption, the worst is yet to come.

Related Content:  Election Offences During VotingDay That You're Likely To Commit And Legal Tips On Handling Electronic Evidence

DP’s name has been floating around many corruption cases in Kenya including the latest fake arms deal where former CS Rashid Echesa was arrested over. The scam is said to have been brewed in DP’s office and with suspicions that it had his blessings. Ruto is walking on a tight rope, “Ruto will be impeached. You can take that to the bank.” Said Mutahi.

Ruto has been courting the Mt.Kenya voters in a strategy that he hopes to secure a watertight support base, this too Mutahi threw punches to, “If you go to the Kikuyus and tell them that Ruto is a thief, remember that Kikuyus have been called thieves for a long time. Basically, you’re telling them that Ruto is one of them. Those tactics won’t work.”

Mutahi hypothesize that 2022 will be a race between Ruto and Raila with Raila most likely to be the President but with weaker powers hence the BBI to have an executive PM which is likely to be Uhuru’s. “For sure, Raila will run against Ruto in 2022 and there will be a run-off. If Raila and Ruto go into the 2022 election, there will be a run-off. To avoid a runoff in 2022, BBI II will give us a prime minister.” He analyzed.

“Raila’s endgame is State House. It doesn’t matter how he arrives there, whether as an Executive President or a ceremonial one. My view is that Raila will arrive at State House as a ceremonial president. His job will be to kiss babies, do guard of honours and other stuff.” Mutahi said.

Related Content:  Uhuru Host Luo Leaders In State House, Promised To Leave A Strong Legacy Together With Raila
Kenya Insights allows guest blogging, if you want to be published on Kenya’s most authoritative and accurate blog, have an expose, news TIPS, story angles, human interest stories, drop us an email on [email protected] or via Telegram
Related Topics:
Up Next

Miguna To Ruto On Resignation: You Stole Elections Together Make Sure You Sink With Him