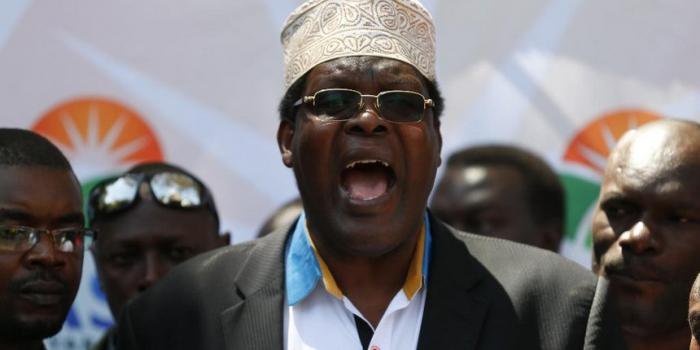 Miguna Miguna addressing the press an a past NASA event.

President Uhuru Kenyatta and Raila Odinga today left many tongues wagging after signing an impact that would put to an stop a lengthened political animosity that has clouded Kenya for months since the botched elections of August 2018. The two decided to bury their hatchet in a shocking move that has left other NASA principals in distraught and surprised. Miguna Miguna who was instrumental in his swearing in and was consequently deported to Canada is one man who was obviously going to be of interest in the latest development. Below is his statement.

I have been advised of media reports that the People’s President, Raila Amolo Odinga has “reconciled” with the despotic president Uhuru Kenyatta. I understand that Mr. Odinga has further stated that the “conflict is over” and called on the country to “reconcile and move on.”

Mr. Odinga’s unilateral, irrational and erratic decision to betray the fight for electoral justice, the culture of impunity and the flagrant abuse of human rights that have become routine under the illegitimate regime of Uhuru Kenyatta and William Ruto cannot be justified.

Between July 2017 to the present, Uhuru Kenyatta and William Ruto have murdered more than 380 innocent civilians in cold blood. These martyrs were butchered by agents of the illegitimate Jubilee administration they were perceived to be “supporters” of Raila Odinga.

These victims of a brutal and blood curdling regime include Baby Pendo, 9-yeasr old Stephanie Moraa, 7-year old Geoffrey Mutinda, the I.E.B.C.’s director for technology Chris Msando, the 18 young men who perished during Raila Odinga’s homecoming journey between the Jomo Kenyatta International Airport and the Central Business District on November 17, 2018, the three people who were shot dead by the gangster regime at Ahero Town as they protested against my illegal abduction, incommunicado detention without trial and forceful exile in February 2018, and many more who have died as they protested against the fraudulent election of August 8th, 2017. 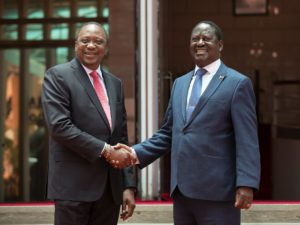 As Raila Odinga and Uhuru Kenyatta toast, hug and laugh in Nairobi, I remain marooned in Canada because I swore the former in at Uhuru Park on January 30th, 2018. I am here against my will. I am here despite the fact that I have a birthright to be in Kenya. I am here against my will because the illegitimate regime of Uhuru Kenyatta and William Ruto violated my constitutional and human rights, subverted the constitution, disobeyed multiple court orders and refused to operate within the rule of law.

In other words, the “reconciliation” between Uhuru Kenyatta and Raila is a fundamental betrayal of the hundreds of innocent Kenyans who have lost their lives fighting for democracy and in defense of Raila Odinga’s stolen electoral victories of 2007, 2013 and 2017.

The ‘bridges” Raila Odinga and Uhuru Kenyatta are talking about and intend to build will turn Kenya into an authoritarian and despotic Kenyatta and Odinga Monarchy.

The “reconciliation” betrays the principles for which the National Resistance Movement Kenya (NRMKe) was established, which is to fight for electoral justice, social justice, the protection of and respect for the constitution and our fragile democracy, respect for the rule of law and the independence of the judiciary.

It betrays everything the NRMKe and I have stood and fought for. As such, I cannot support it.

True reconciliation of Kenyans is not about two people shaking hands but building a just and equal society governed by the rule of law, respect for human rights and an end to corruption and tribalism.

The “reconciliation” Uhuru Kenyatta and Raila Odinga are talking about is not intended to help the unemployed youth get jobs and the millions of homeless Kenyans get shelter. It is not intended to help the struggling workers; the professionals and middle class secure their future and livelihoods. It is meant to cement the 55-year domination by a few elites and families over 99 per cent of suffering Kenyans.

I will return to Kenya on March 26, 2018 so as to continue the struggle for electoral justice and the culture of impunity that both Raila Odinga and Uhuru Kenyatta now represent.

I will join with all progressive Kenyans in bringing about concrete, substantive and fundamental structural and institutional changes that Kenyans deserve.
Aluta Continua.

Related Content:  Duale Wept: How To Tell If Your Source Is Lying
Kenya Insights allows guest blogging, if you want to be published on Kenya’s most authoritative and accurate blog, have an expose, news TIPS, story angles, human interest stories, drop us an email on [email protected] or via Telegram
Related Topics:
Up Next