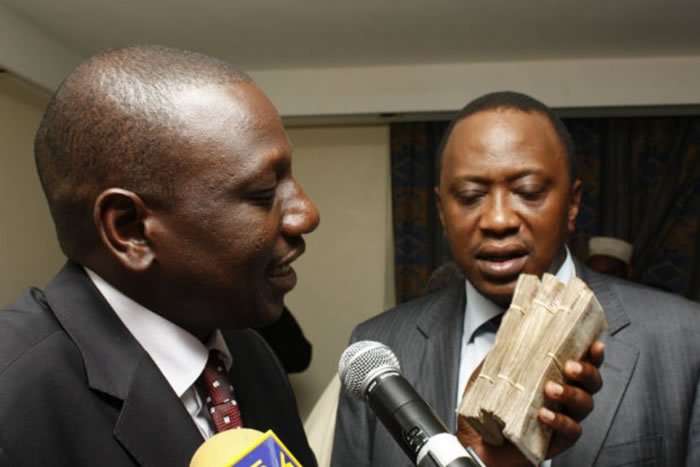 Reports by Citizen Weekly indicated that the differences between the Head of State and his Deputy are not political as many people perceive, but the course of their rift is economical after the two disagreed on the financial firm that was to be picked to roll out Safaricom’s multibillion Fuliza program after the 2017 general elections.Inside sources privy to what transpired revealed that President Kenyatta and DP Ruto suggested different banks sponsor the Fuliza deal which gives room to Mpesa users to get an overdraft even if their balance is insufficient.The Second in command reportedly fronted Kenya Commercial Bank (KCB) to roll out the program while President Kenyatta together with Baringo Senator Gideon Moi fronted the National Commercial Bank of Africa (NCBA) bank that eventually bagged the deal despite an earlier agreement that KCB would also be included in the Safaricom’s program.This raw deal saw Deputy President William Ruto lose billions of money he would have bagged as commissions if KCB was to be included in the fuliza program.Reports by Citizen Weekly further indicated that DP Ruto had been made to believe that he was part of the deal during the 2017 electioneering period.If the deal went on as planned Safaricom, Kenya Commercial Bank, and NCBA Bank would have introduced the payments interface on M-Pesa which allows customers pre-authorization of transactions for payments to be made later.The publication further revealed that DP Ruto spared all his energy to campaign for President Kenyatta to be re-elected with the hope of bagging the billions from the Fuliza deal the cash he was planning to use in his 2022 presidential ambitions, little did he know that he was only being used to help in Uhuru’s campaigns.

Related Content:  Apple’s iPhone Has Sold More Than USD47.9B In First Quarter
Kenya Insights allows guest blogging, if you want to be published on Kenya’s most authoritative and accurate blog, have an expose, news TIPS, story angles, human interest stories, drop us an email on tips.kenyainsights@gmail.com or via Telegram
Related Topics:Deputy President William RutoFulizaPresident Uhuru Kenyatta
Up Next