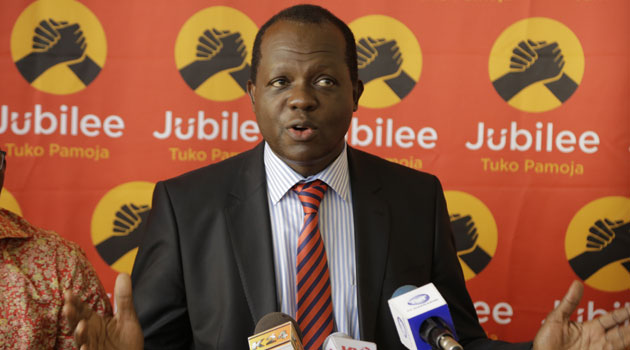 Former Jubilee Party Secretary General Raphael Tuju has been unveiled as the Executive Director of the Azimio la Umoja secretariat.

His appointment was announced on Wednesday, April 6, by the former prime minister Raila Odinga who is Azimio’s Presidential flag bearer.

Tuju’s new role will be to coordinate Azimo coalition parties and also to lead the strategic and program teams to ensure the coalition led and financed by President Uhuru Kenyatta win the August 9 General Election with Odinga as the president.

“….Hon Tuju has decades of experience in politics and government, having served as Member of Parliament, Cabinet Minister and Jubilee Party Secretary General,” a statement by Raila Odinga’s team read in part.

Tuju who is a former Rarieda MP and Cabinet Secretary without portfolio stepped down from his role at Jubilee SG in February to seek an elective position but has ended up as Odinga’s subordinate.

But he has not declared the exact elective seat he is interest in and where he is going to vie. Tuju had a stunning record in his one term as Rarieda Mp but lost the seat after falling out with Odinga in the run up to 2007 elections.

The former MP made the declaration during the Jubilee’s National Delegates Convention (NDC) meeting held at the Kenyatta International Convention Centre (KICC), Nairobi, on February 26.

Tuju was replaced by Ndaragwa MP Jeremiah Kioni in the same meeting where President Uhuru Kenyatta pleaded with Odinga to give the former SG political support to prevail in the coming elections.

Uhuru is the leader of Jubilee party which is one of the founding members of the Azimio la Umoja coalition that has the settled on Odinga as its presidential candidate.

Tuju and Odinga have not been seeing eye to eye since they fell out in 2005 when they both served as Cabinet Ministers in President Mwai Kibaki’s government.

Raila Odinga who served as the Roads minister then claimed that Tuju would not have made it to Parliament without his support.

They the remained arch-rivals but tensions between them eased when Odinga and President Kenyatta made peace through the infamous handshake in March 2018.

Kenya Insights allows guest blogging, if you want to be published on Kenya’s most authoritative and accurate blog, have an expose, news TIPS, story angles, human interest stories, drop us an email on [email protected] or via Telegram
Related Topics:AzimioPresident Uhuru KenyattaRaila OdingaRaphael Tuju
Up Next