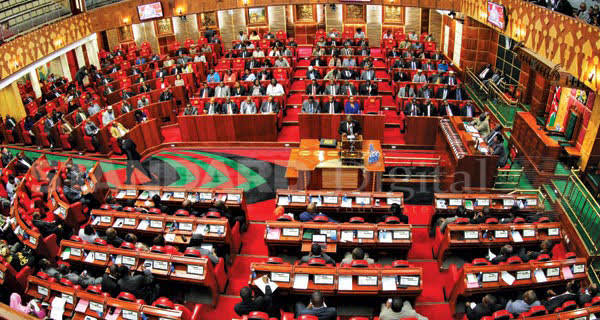 If the MPs were to approve the proposed changes by the National Treasury, earnings by the retirees will be subjected to a minimum tax of 10 percent for monthly payments of up to Sh33,333, or Sh400,000 a year, and a maximum of 25 percent for those earning more than Sh100,000 a month or Sh1.2 million a year.

Luckily enough, the 2020 Finance Bill sailed through the floor of the National Assembly as Members of Parliament shot down proposals by Treasury to raise taxes from pensioners and LPG gas.

In the vote subjected to the committee of the whole house, the Members of Parliament elected to keep the majority of ammendments as brought forth by the House Finance and National Planning Committee.

While the Treasury had sought to end part of tax exemptions by levying taxes on income from the National Social Security Fund (NSSF) and move LPG gas into the VAT-able category, MPS viewed the move as counter productive and elected to keep the relief.

“Through these ammendments we have returned the benefit to pensioners. We have had a lot of cries from the elderly over the proposal to tax them. What we are doing here is to save the pensioners,” said the Finance and National Planning Chairman Joseph Limo.

At the same time, the National Assembly adopted reforms moving the supply of maize flour, wheat and cassava flour from exempt status into the zero-rated category.

Related Content:  Missing Nairobi’s MCA Habiba Hussein Has Been In And Out Of Hospital For Two Years After Losing A Baby From A Complicated Pregnancy

These ammendment is however expected to be scrutinized again by the House after a six-month lapse as MPS argue for a review of the plans near-term merits and demerits.

The vote on unga is a reversal from 2019, when MPs pushed the supply of the staple from zero-rated to exempt.

The review of the supply of unga is expected to provide further cushioning to Kenyans through the Covid-19 pandemic.

Alcohol manufacturers and their respective clients are however expected to feel the heat of the exchequer after MPs voted to lower the coverage of excise duty on both beers and spirits to products whose alcohol strength exceeds 6 percent by volume.

The review of the inflation adjusted levy will mean higher prices for certain beers and spirits and will lead to higher costs to consumers.

The higher taxes come even as the industry faces off with the exchequer over planned cuts to the remission of excise duty levied on beer made from locally sourced raw materials/kegs.

Other proposals carried in the Finance as proposed by Treasury Cabinet Secretary Ukur Yatani include the levying of a minimum tax charged at the rate of one percent of gross turnovers to loss making entities as the exchequer seeks to widen the tax net.

Digital firms are also set to account for a 1.5 percent tax on gross sales, a charge to be offset against other levies for companies operating locally.

Further, income generated from home ownership savings plans (HOSPs) will now be subject to taxation in spite of opposition over its impact on the government’s affordable housing initiative.

The bill is now the subject of scrutiny by President Uhuru Kenyatta who may chose to assent it as presented or send it back to the floor of the house with ammendments.

Proposals contained under the Income Tax Act and the Tax Procedures Act are expected to become effective from January 1 while all other ammendments will take effect upon the Presidential assent.

In its entirety, the 2020 Finance Bill had been aimed at raising an additional Ksh.38.9 billion from the exchequer, this projection is however diluted after running through changes in Parliament.