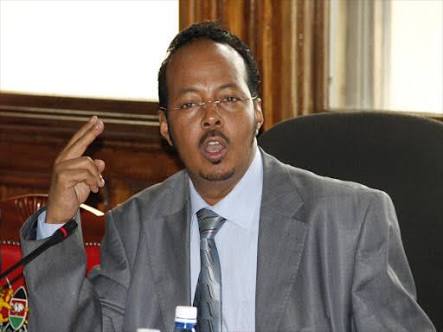 A spat between activist Boniface Mwangi and Jubilee’s party strongman Adan Keynan has led to the resurfacing of murder charges that the MP had faced before.

Keynan was one of the biggest beneficiaries in the recent jubilee purge making him a key president Uhuru’s point-man in parliament. Uhuru names him the coalition’s secretary. Mwangi took on him immediately after the announcements were made.

President Uhuru Kenyatta has appointed Adan Keynan as Jubilee Coalition Secretary. Who is Adan? The MP was alleged to have shot 3 men to death and had their bodies dumped in a forest in Ngong after a piece of land he was selling in Nairobi for Sh34 million turned out to be fake. pic.twitter.com/2kwset9cuQ

President Uhuru Kenyatta selection of Kimunya and Adan Keynan is very telling. Adan has faced murder charges and Kimunya was charged with corruption. Those two will play dirty politics as they spearhead change the constitution movement. Expect bribery, blackmail and even murder.

Below is the chronology given by Boniface Mwangi on the murder case against the MP. 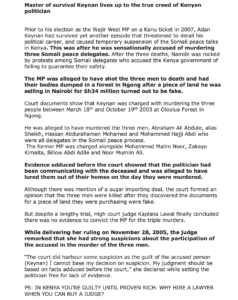 Keynan was however acquitted of the charges based on lack of evidence. In a long ruling, the judge however cast his own suspicions. “I do note with deep sorrow that due to unavailability of evidence as per law, I have to decide as I have done, although this court did harbour some suspicion as to guilt of the Accused. I cannot base my decision on suspicion which should be, as I have indeed done so, on the facts before the court.” Said Judge Rawal in the closing statement.

Related Content:  Kahawa Wendani MCA Found Dead In India
Kenya Insights allows guest blogging, if you want to be published on Kenya’s most authoritative and accurate blog, have an expose, news, story angles, human interest stories, drop us an email on tips.kenyainsights@gmail.com or via Telegram
Related Topics:
Up Next

How Waiguru Used A Coffee Shop In New York To Steal Millions, Witness