Tourism CS Najib Balala’s brother Jalal Balala Al Azizah General Trading and Events Organizing Company Executive Director in Dubai — and whom once came to limelight in 2018 when he paid and booked a woman from Dubai to ‘take care of him’ for three months, but allegations of cruelty and theft landed the matter in court.

Jalal Balala was accused at the Shanzu Law Courts in Mombasa of mistreating Barouskaya Krystina, a beauty from Belarus but based in Dubai where he’s a tea and coffee.

Jalala is said to have brought Krystina to Kenya on January 25, 2018 and the two were met by a government security detail at the Moi Airport Mombasa.

Jalal, the court heard, had invited Krystina for a birthday party after which she was to return to Dubai. Krystina’s brief was to offer “general duties” to Jalal who told the court he invited her as he was “old, had fractured arms and was battling cancer.” 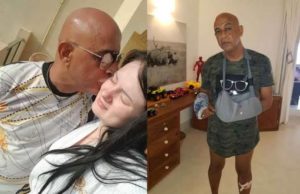 Jalala had paid Krystina to offer the services for three months.

Well, with that short brief, he has come back once again to limelight after reports of Kenyans – his employees came out complaining of mistreatment, confiscation of the their passports by Jalal hence creating an impasse for them to travel back home on special arrangements.

The victims are complaining of living in harsh environmental conditions with financial constraints.

“Tumekwama Dubai and most of the Kenyans here waliachishwa kazi, unable to pay rent, food is another big problem,some of are forced to sleep in the street parks. We have been crying to the embassy watutafutie ndege but all seems to be in vain. We don’t need a free flight”

"We are more than twenty Kenyans stuck in Dubai because of one Mr. Jalal brother to @tunajibu, who has refused to pay us or to give us back our traveling documents.He keeps on bragging that his brother is influential and Kenyan embassy can't do anything."-Via Dm @ForeignOfficeKE pic.twitter.com/KsA8q6VNBk

In Prayers and solidarity may they find justice.

Related Content:  Museveni's Administration To Register And Monitor Social Media Influencers
Kenya Insights allows guest blogging, if you want to be published on Kenya’s most authoritative and accurate blog, have an expose, news, story angles, human interest stories, drop us an email on tips.kenyainsights@gmail.com or via Telegram
Related Topics:
Up Next