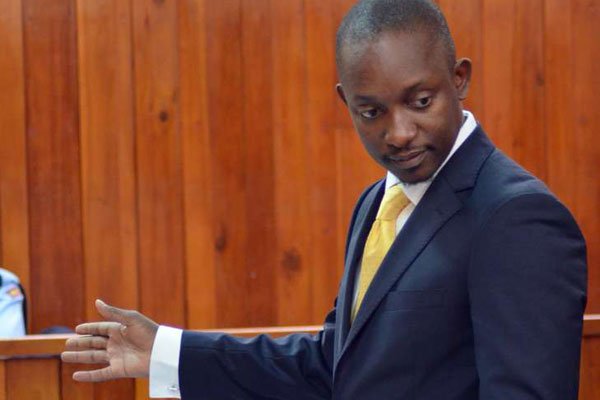 A Mombasa resident lawyer has been charged with attempting to obtain Ksh 1.1 billion from a Chinese construction company.

Stephens Kithi Ngombo is facing two counts in which the State is accusing him of falsely receiving money in a land transaction deal.

The charge sheet indicates that the suspect attempted to obtain the monies from China Wuyi Kenya Limited in the pretense of selling the firm a plot belonging to Tourism Finance Corporation.

The lawyer who is based in Mombasa is alleged to have committed the offense in Mombasa on July 30, 2016.

Ngombo is further accused of obtaining Ksh 20 million from the construction firm.

He is charged that on April 18, 2017, with intent to defraud, he obtained the money from the firm by falsely pretending that it was part payment to secure vacant possession of the plot.

China Wu Yi (Kenya) Company Limited had sued the based lawyer for return of the Sh20 million he was allegedly paid to enable it acquire a parcel of land.

The company had also sought to have Mr Stephen Kithi refund the Sh5.8 million legal fees it incurred in the aborted sale.

The company claim it entered a sale agreement with Mr Kithi on or about July 30, 2016.

It says the lawyer was contracted in his capacity as a beneficial owner of the land, having obtained authority by purportedly winning a tender to sell it on behalf of the registered owner.

The company also says that the agreed price was Sh1.2 billion and that it was further agreed that upon payment of the deposit, the lawyer would ensure tenants left and that all semi-permanent fixtures were removed.

China Wu Yi says that after execution of the variation, it proceeded to pay the lawyer Sh121 million, being 10 per cent of the purchase price, into an interest earning account at a bank, held jointly by lawyers for both parties.

“On April 11 2017, at the defendant’s request, the plaintiff, through its advocates, released Sh20 million out of the deposit paid to be utilised for vacant possession,” the suit documents state.

The company further says that through its advocates, it reminded Mr Kithi, by way of letters, that it was ready to complete the transaction.

It says it informed the lawyer that he was under obligation to fulfil his responsibilities under the agreement and variation as pertained to procuring vacant possession and delivery of the completion documents.

The company adds that it required the lawyer to nominate it as the authorised transferee to facilitate preparation of transfer forms by the registered owner to itself, but says this was never done.

“Instead, the defendant introduced a third party by the name of Propken (Mauritius) Ltd who purportedly had the transferees’ rights to the property.”

The company argues that despite affording Mr Kithi opportunities to deliver vacant possession and completion documents, he failed to comply, forcing it to rescind the agreement for breach of contract.

According to the plaintiff, the defendant was fraudulent and misrepresented facts which, if disclosed at the time of entering into the agreement, it would have opted out.

China Wu Yi says that following the rescission of the agreement, it pursued a refund of the deposit by writing a letter to the bank, advising cancellation of the transaction and requesting closure of the joint account and transfer of all proceeds to its account.

It says that after the proceeds of the joint account were released to it, it continued to pursue the advance payment (Sh20 million) paid to Mr Kithi to facilitate vacant possession.

“To date, the defendant has not refunded the amount despite the agreement requiring a refund of all sums paid to the vendor immediately upon lapse of the completion notice,” the court documents state.

The company is also seeking general damages for breach of contract, loss of investment opportunity and time spent on the transaction.

He was granted a Ksh 500, 000 cash bail with an alternative bond of Ksh 2 Million with one surety of a similar amount.

When Kenya PPEs were exported to China