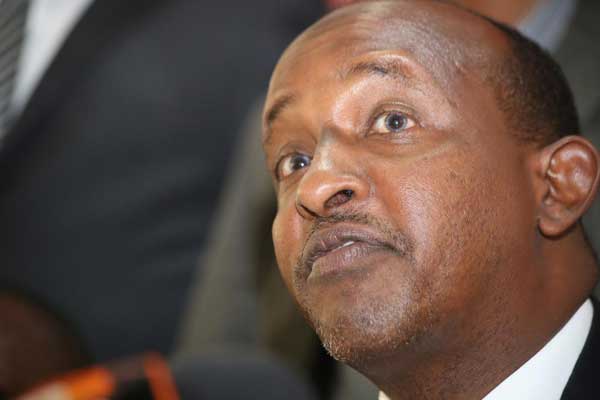 Kenya National Highways Authority has awarded Concordia Building and Civil Engineering Company Ltd a firm linked and registered with Majority Leader Aden Duale and a Abdi Duale as the directors. The firm ‘won’ the tender to construct a simple footpath in the A3 Road in Garissa which also happens to be Duale’s constituency where he’s the member of parliament, talk about insider deals.

According to the contract agreement witnessed by Norah B.A Advocates, it goes through for 15 months. What’s puzzling is not only about the area MP, Duale, awarding himself the tender but the mere fact that a simple footpath costs Sh154M an amount that is capable of constructing a long road given existing market prices, if this is not looting then what can it be explained as?

Investigations done by media press, indicates that firms linked to Mr Duale have got millions-shilling-worth of contracts from government entities, with his specialty being the partitioning of offices for government agencies moving head offices or modifying existing designs. 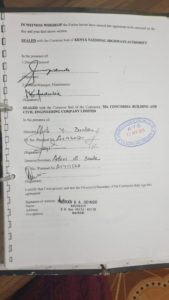 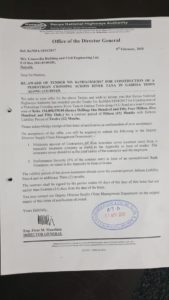 In one new case, Concordia Building and Civil Engineering Company Ltd, of which the MP was a founding director, last year received Sh157 million for the partitioning of two floors of the new headquarters of the National Construction Authority at the new Kenya Commercial Bank Plaza in Upper Hill Nairobi.

Valuers contended that Sh157 million was an astounding amount to use on partitioning office space, but the company got the tender even though some others quoted much lower prices for the same job. Some 29 companies bought tender documents for the job when the NCA advertised it.

A valuer from the Ministry of Lands, Housing and Urban Development who spoke to the website on condition of anonymity said the tender was “grossly inflated. This money, taken together with the rent being paid for just the first three years, could have built the NCA a permanent headquarters,” said the valuer.

Two companies associated with Mr Duale were also implicated over claims that they were irregularly awarded multimillion tenders by Geothermal Development Company (GDC).

Concordia Building and Civil Engineering Limited and Nomad Palace Hotel Limited were awarded the tenders at a time when the Parliamentary Committee on Legal Affairs chaired by Ainabkoi MP Samuel Chepkonga had put pressure on EACC to investigate GDC and its Managing Director Silas Simiyu, who was later suspended, over inflated costs of transportation of power plant equipment to the tune of Sh1.7 billion.

Before the issue landed before the Legal Affairs Committee, EACC had initiated investigations to establish how GDC offered Bonfide Clearing and Forwarding a contract in 2012 to move geothermal rigs and other equipment in 40 lots with each costing Sh42 million within a distance of 11 kilometres, bringing the worth of the entire deal to Sh1.7 billion.

In a different letter that was send to the DCI and copied to Kenya Insights, the Duale’s family and particularly the son Abdul Duale was adversely mentioned in Kenya Pipeline looting that amounted to billions, however the claims haven’t been ascertained because of no investigations.

Its highest degree of irony for the majority leader in parliament whom many allege to have increased his worth during his stint in parliament to talk about corruption while his name is tinted with graft accusations.

Duale has since distanced himself saying he’s not associated with Concordia Ltd, the company implicated in the bloated raid construction deal in Garissa where he’s the MP.

2/2 The company in question is Concordia. I'm not the Director. If they run the fake story I will sue @dailynation / @ntvkenya for defamation. I have provided all the necessary details to the editor.

Attached are my legal documents for them to do their assignment well. pic.twitter.com/U4Ukn0321u

Despite providing the Nation reporter with all the documents that could have helped him to do a professional job, sadly @dailynation has decided to go the gutter route by publishing pure falsehood in the name of investigative journalism.

I'm not a Director of the alleged company pic.twitter.com/m4M54PygeS