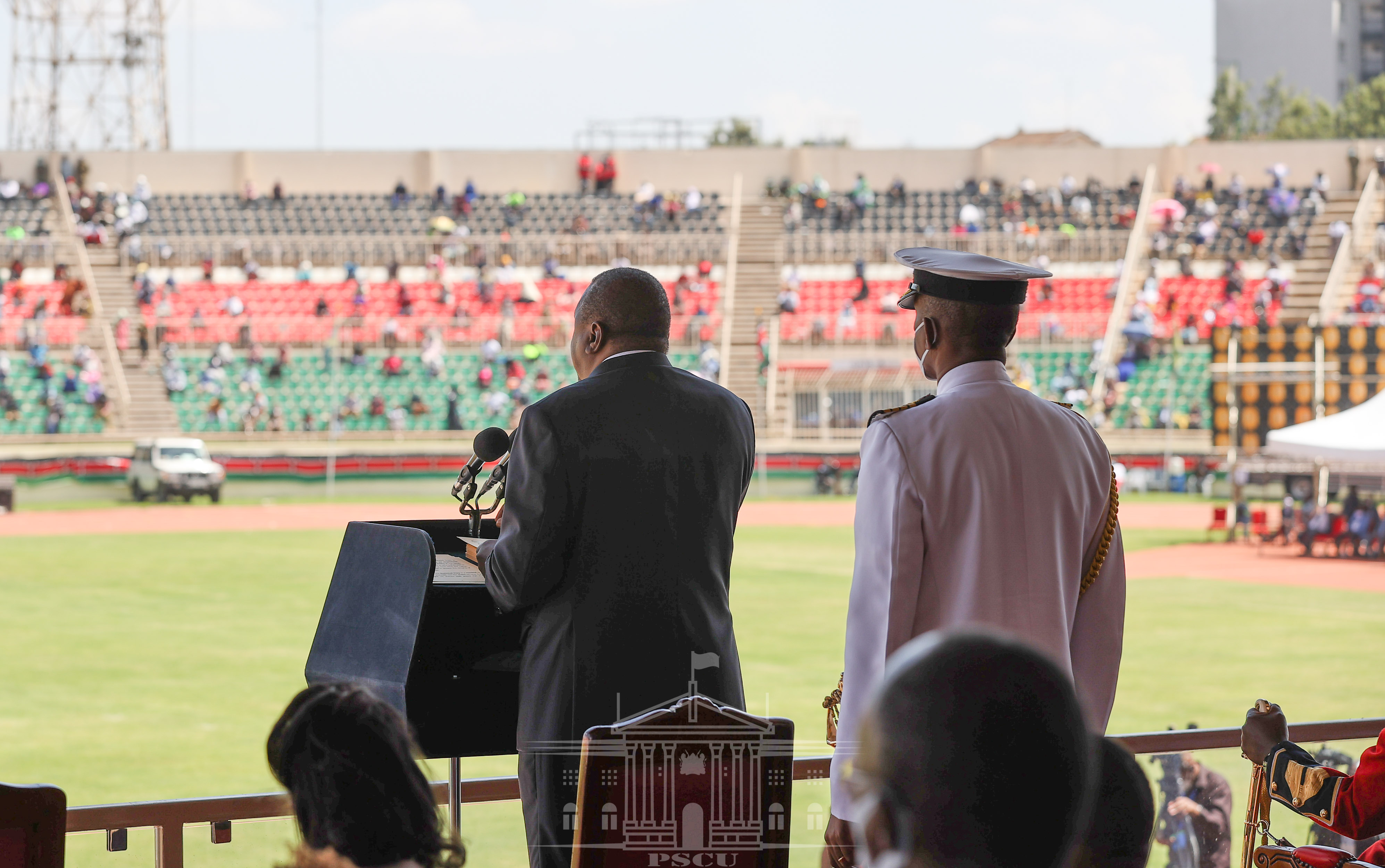 NAIROBI, 12 December 2020 (PSCU) – President Uhuru Kenyatta has assured Kenyans that learning at all levels will resume on January 4th next year.

The President, who spoke Saturday at Nyayo National Stadium when he led the country in marking this year’s Jamhuri Day, asked parents and guardians to facilitate their children to resume learning when schools reopen.

“In that regard, and in line with the policy of the Government on universal and compulsory basic education for all children of up to 18 years, all parents and guardians are required to facilitate their children to resume learning in January 2021,” the President, who was accompanied by First Lady Margaret Kenyatta, said.

To ensure compliance with the directive and guarantee that no child will be left behind, President Kenyatta ordered the Ministry of Interior and Coordination of National Government, through chiefs and their assistants, to ensure that all children report back to school next month.

At the same time, the Head of State instructed the Ministry of Education to re-issue and publicize the Education Policy on School Re-Entry to facilitate the re-admission of all learners who may not be able to report back due to pregnancy.

On containment of Covid-19 in schools, the President said the Ministries of Education and Health had developed specific protocols and guidelines to facilitate the re-opening of all learning institutions.

While paying tribute to the country’s founding fathers for laying a solid foundation for socio-economic and political development, President Kenyatta said the Big 4 Agenda builds on the intentions of the previous administrations.

“Each generation of leaders in this process understood that Kenya was a work in progress. They built and improved on the platforms left by the previous leader. They had to make better what others had done.

“And this is the logic behind the Big 4. It is not a project; it is a process. It is a framework, which I have used to organize the delivery of Government services in order to improve on what previous Presidents did,” President Kenyatta said.

The President said the Big 4 Agenda boosts aspirations that run through the country’s history, focusing on four intents of the liberation struggle and the aspirations of the nation’s founding fathers.

He said the Big 4 focuses on liberating Kenyans from the poverty of dignity caused by inadequate services as the first intent while the second intent was transitioning citizens, especially the youth, from being ‘earners of wages’ to ‘owners of capital’ no matter how rudimentary.

“And this is why I am investing in the Boda Boda movement whose plan is to build capital through a ritual of daily savings they have called Kidogo Kidogo,” the President said.

The third aspiration is jump-starting the shift from being a country of net consumption to one of net production while the fourth is building a holistic base of human capital that is food secure and health assured.

The President also outlined the progress made on the universal health coverage pillar of the Big 4 Agenda noting that Covid-19 had led to accelerated expansion of the country’s health infrastructure.

The President took the opportunity to commend healthcare workers for their dedication and selflessness amid the greatest public health challenge in many years.

“Their professionalism, excellence, unfailing commitment to their sacred oath and their sacrifices, must be reciprocated by Kenyans acting responsibly amid the Covid-19 pandemic,” the President said.

He said that although there were some challenges, it must be remembered that developing the health sector to desired levels is a work in progress which the Government is undertaking.

On BBI, the President said the reform processes proposes amendments to the Constitution that give Kenyans hope for a better nation.

“BBI intends to complete what we started when we adopted the 2010 Constitution and promised to change it later,” the President said.

On the spirit of inclusion, the President said it does not augur well for the country’s nationhood to have two occupants at the apex of the Executive in the persons of the President and Deputy President.

“More so, in an ethnically diverse nation as ours, this creates an environment of ‘political exclusion’ resulting in the cyclic violence we have witnessed in every election,” the President noted.

He said increased positions at the apex of the Executive from two to five by introducing a Prime Minister and two Deputies will accommodate more communities.

Other inclusive proposals in the BBI include re-introduction of the position of Leader of Official Opposition which the President said was successful under the former constitutional order.

President Kenyatta also applauded BBI’s proposal of a 50:50 ‘shareholding’ of Senate by men and women, saying if 50 percent of Senate will be made of women, their contribution to a robust devolved system will be felt.

Speaking at the celebration also attended by various national leaders among them opposition leader Raila Odinga, Deputy President Dr William Ruto expressed optimism that with unity of purpose, thought and plan, the country will overcome the challenges occasioned by the Covid-19 pandemic.

Among those feted were Chief of the Kenya Defence Forces Gen. Robert Kibochi who received the Elder of the Golden Heart (EGH) award for selfless service and devotion to the Nation.

Athlete Catherine Ndereba got the Moran of the Order of the Burning Spear (MBS) award for achievements in sports while Nurse Alice Njeri Mwaura of Kenyatta National Hospital was awarded the Order of the Grand Warrior (OGW) for selfless and dedicated service to the nation in the fight against Covid-19.

The Head of State also conferred Kenyan citizenship to several Shona and Banyarwanda people who emigrated into the country and got assimilated over the decades.

Experts Warn Of Second Wave Of Desert Locusts In January