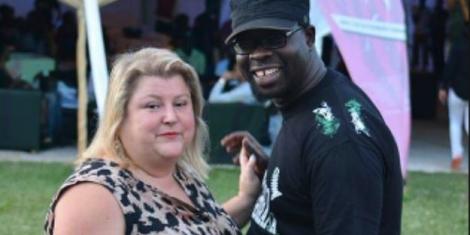 While talking at Okoth’s memorial service in Moi Girls, Sonko revealed that Okoth had a son with a lady who happened to be from his Sonko Rescue team. Anne Muthoni has a son with Ken Okoth, Jayden Okoth. Apparently, the two met during a medical camp in Kibra in 2013 that Sonko has organized with the MP.

In A turn of events, MONICA Okoth, WIFE of late Kibra MP Ken Okoth, has said that the DNA results of son presented in court By Anne Muthoni are different from what she has;

Anne Muthoni who has shocked many by siding with Jubilee’s Mariga in the hotly contested Kibra seat against her brother-in-law Imran Okoth, insists Okoth was the son’ father s revelation that was controversially blown by Nairobi Governor Sonko who claimed to have been the matchmaker.

The case to be mentioned on Oct 2.

Kenya Insights allows guest blogging, if you want to be published on Kenya’s most authoritative and accurate blog, have an expose, news TIPS, story angles, human interest stories, drop us an email on [email protected] or via Telegram
Related Content:  Wilbroad Gachoka, A Chinese National, How A Little Known Kilig Ltd Irregularly Won Sh4B COVID-19 Supply Tender To Kemsa
Related Topics:Anne MuthoniKen OkothMonica Okoth
Up Next

Ezekiel Mutua Speaks Out On The Vulgar Consolata Boy