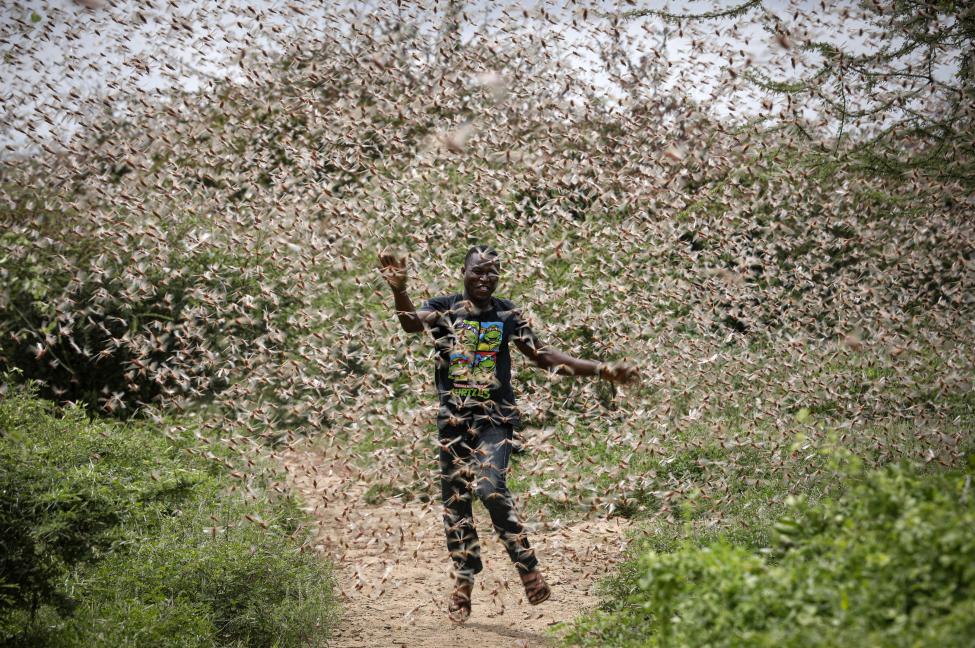 The government has assured farmers that the country has sufficient stocks of chemicals and other vital resources required to fight against a bigger invasion of a second wave of desert locusts that experts predict will land mid this month and early January next year.

Locust monitoring specialists at National Locust Control Centre estimate that massive swarms of this winged menace are already airborne and barreling towards Kenya from Somalia and Ethiopia.
Agriculture, Livestock, Fisheries and Cooperatives Cabinet Secretary Peter Munya stated that the government was fully prepared to manage this second wave that is expected to be bigger and more aggressive than the initial swarm that arrived in December last year.

The CS further warned of potential adverse effects in the agricultural sector owing to the possibility of wide-scale crop destruction that will eventually impact negatively on the country’s food production.
He was speaking on Thursday at Canan area in Voi sub-county during an assessment tour of the region to establish the extent of locust invasion in local farms.

During the visit, the CS launched the county’s locust containment programme to manage the hoppers and nymphs, recently hatched from eggs laid when the first swarm reported in the county last month.
“The government has enough chemicals and other resources to manage and contain the second invasion that is expected this month and early next month. There is no need for panic,” he said.

Noting that agriculture was a devolved function, the CS assured counties that the national government would support and complement counties’ efforts to contain the locust by providing resources, expertise and manpower to bolster containment measures.

Related Content:  Aisha Jumwa’s Estranged Boyfriend Attempts Suicide After She Dumped Him For Another Man And Stealing His Sh10M

Already, a contingent of over 100 National Youth Service (NYS) personnel, trained in locust management, has been deployed in the county to provide specialised support on containing the locusts.

The NYS team was deployed from Garissa and Wajir counties where they had been battling locust invasion for the better half of this year.

The CS noted that unlike the first invasion, the second wave of desert locust was causing jitters because it was estimated to land in the country when crops are still very young. This would mean extensive destruction of farms in many regions across the country.

“The first invasion came when most crops were mature and the damage was not as severe. Now, the crops are too young and that poses a real threat to the farms,” he said.

Locusts have invaded over 15 counties across the country. In the last three days, there have been reports of invasion in Kilifi, Tana River and parts of Kwale. Taita Taveta County reported the first ever locust invasion in November.

Governor Samboja hailed the national government for a speedy response to combat the menace. He expressed optimism that the measures put in place by the government to battle locusts would yield results.

“We are hopeful that these efforts will bear fruits and allow our farmers to harvest,” he said.

The CS assured the public that the chemicals being used were safe and only affected locusts only. He stated that international bodies including the Food and Agricultural Organization have cleared the chemicals for use against the locust.

He admitted that farmers have incurred losses from the invasions and said the government was working on restorative measures to ensure their lives were not disrupted.

“We are not compensating for crop loss but we are engaging in livelihood restorations for farmers whose crops have been destroyed,” he said.

Munya noted that his ministry was working closely with the Ministry of Tourism and Wildlife in handling the swarms of locusts that were roosting inside the national park. He thanked stakeholders including Kenya Defense Forces for providing equipment like choppers to monitor the movement of the locusts.

Learning At All Levels To Resume Next Month, President Kenyatta Assures