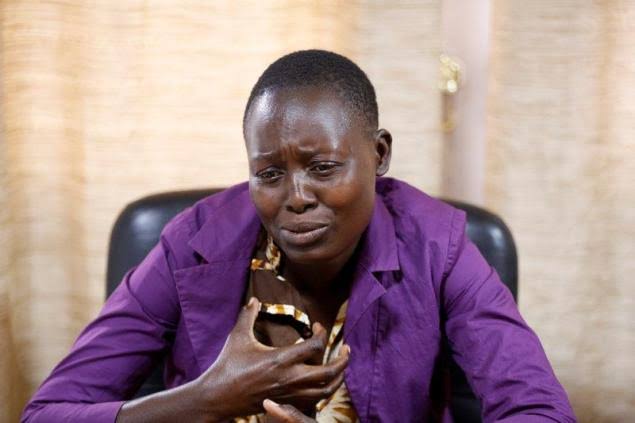 Lancer Achieng and Joseph Abanja named their named their infant Pendo because they believed God had shown Achieng love and mercy after she went through a difficult delivery. Married in 2012, the couple has gone through reproductive difficulties that have seen Achieng suffer several miscarriages in the last five years. When Baby Samantha was finally delivered in February this year, she was the source of you to the young family.

For six months, the family lived happily embracing the gift of a healthy daughter until it was cut short on the night of 11th August. No sooner had IEBC made the announcement that President Uhuru has retained his seat beating Raila with 54% against 44% than his home turf Kisumu, erupted into protests and chaos. This was anticipated, NASA had flagged the election and asked the electoral commission to withhold from announcing the results citing serious rigging. 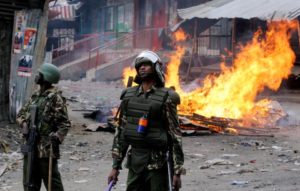 Police walking past a fire set by protesters.

The pleas fell on a dead ear and IEBC Chairman Wafula Chebukati made the announcement that sent Odinga’s supporters to the streets in protest. In Nyalenda slums, Kisumu where Baby Samantha lived, the youths took it to the streets singing in protests. The young family was tucked in their small house following the protests from a safe haven so they thought. The rioting youths were brutally resisted and attacked by the no nonsense anti riot police officers heavily deployed in the region specifically for the post results protests. Officers followed protesters to their homes when they embarked on door-to-door attacks, mercilessly beating and painfully injuring many in this uncouth operation.

At around 1 am, the agents of death knocked on Achieng’s door, when they hesitated, officers lobbed tear gas into the tiny house forcing Ochieng the husband to open. He was thoroughly beaten by the officers who reigned on him with clubs before turning to Achieng who was not spared the wrath. Holding tight to baby Samantha, one of the officers heartlessly smashed the head of the infant with a baton before all running away on realizing the blunder of hitting a baby whom by now was presumed to be dead by the mother who was screaming by then. With the slums locked down by the brutal officers, Achieng and Joseph finally managed to arrive at Aga Khan hospital at 4 am but by then the baby was barely making any movements. 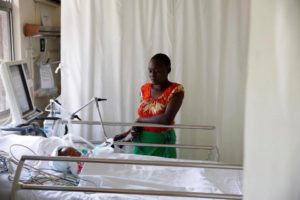 Achieng helplessly watching over her baby Pendo while in a comma at Aga Khan hospital, Kisumu

Baby Pendo went into a comma and unfortunately died four days later leaving immeasurable pain in the hearts of the parents. In a familiar script, the police denied responsibility that they clobbered the infant. Post mortem conducted by government psychologist revealed that her scalp was fractured from the hitting and suffered heavy internal bleeding.

I said familiar script for the simple reason that police commit these atrocities and never own up. It didn’t come as a surprise that a no number of officers were deployed to Odinga stronghold predominantly resided by the Luo community. The force with which the protests were met with us nothing close to normal. From Kibera to Mathare to Kisumu, the police officers seem to have ulterior motives beyond maintaining peace and protecting property. Body bags were ferried to Kisumu a clear signal that police were out to kill as many. Raiding homes in the middle of the night indeed is not about containing riots but reigning terror. The use of live bullets on protesters is ill advised and a pointer of killing motives. Police are only supposed to use live bullets in protecting lives, not even property. 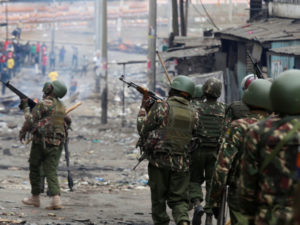 Police are trained to disarm any civilian and arrest if they pose danger but our officers must be reading from a totally different doctrine. Most of those shot dead and injured were neither armed nor charged towards the police. The officers simply have a fetish for pulling the trigger. Waving a placard could easily earn you bullets to your chest for causing ‘disturbance’. But the Kenyan authority doesn’t take criticism even an article like this would earn me accusations of being an inciter and threat to national security. In Kenya, they say the truth is also hate speech.

Maina Kiai, a former U.N. rapporteur, and renowned human rights activists is one of the boldest and most fearless figures who’ve previously called out the police brutality especially towards the Luo community. “It is time to state this openly: The Kenya Police Force (it is not a service despite the name change) seems to target the Luo community for extraordinary brutality and violence. No other community is subject to as much force and use of live ammunition as the Luo. There are countless demonstrations across the country, but nowhere else do we witness as many casualties—from the overwhelming use of force.” Kiai wrote in an article earlier this year. 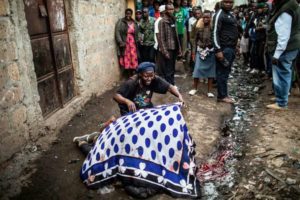 A mother covering the bodies of her two sons shot dead by police in Mathare.

Maina’s unfiltered sentiments came in the week when CORD leadership had called for countrywide protests for the restructuring of IEBC. The Police in custom style targeted Odinga’s supporters particularly the Luos with brutality. Shootings happened in Kisumu. Six-year-old Jeremiah Otieno Adongo was shot at his parents’ house, coincidentally, this happened in Nyalenda slum, same place Baby Samantha Pendo was attacked by the police. 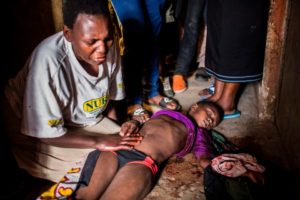 In the same times; a one-year-old boy was critically injured when tear gas was thrown into a house, while two other youths were hospitalized after being brutally beaten by the police. In Nairobi’s Mathare slums also dominated by Luos, the police aimed and shot at a 9-year-old girl playing in the balcony on the 5th floor according to witnesses. In the same estate, an 8-year-old boy was also shot dead by police. This is away from the 17 plus deaths reported by the suspended Kenya Human Rights Commission. The government in rebuttal has said only six people have died and not a single case of bullet death reported. That’s how ‘truthful’ the police in Kenya is. Another case of an 18-year-old form four school boy who was removed hidden under the bed and beaten by the police in Mathare. He later died from the injuries. 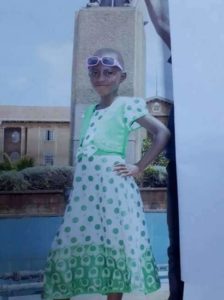 The 9 year old girl shot at by police while playing in the balcony. Mathare.

“When it comes to Luoland, the police force essentially converts itself into a militia serving a political purpose. And this police-cum-militia for Luoland is not new.” Maina Kiai. Brutality in Luos has been normalized and no action is ever taken against such rogue officers, in fact, most end up getting promotions for ‘good job’ for how long will this clear state terror on a community stereotyped for being ‘tough heads’ continue? Since Kenyans don’t like uncomfortable truths as this article, lemme sign off with a question, If Uhuru has lost the election and residents in Kiambu took to the streets in protests, would they have been met with the same police brutality and shootings in the magnitude of Kisumu, Kibera, and Mathare? I thought so too.

Related Content:  Mutagi Ngunyi, 2017 Reverse Logic, And Self-Fulfilling Prophecy
Kenya Insights allows guest blogging, if you want to be published on Kenya’s most authoritative and accurate blog, have an expose, news TIPS, story angles, human interest stories, drop us an email on [email protected] or via Telegram
Related Topics:
Up Next

Death At A Funeral, Kenyan Media Is Breeding A Beast That Will Devour Them