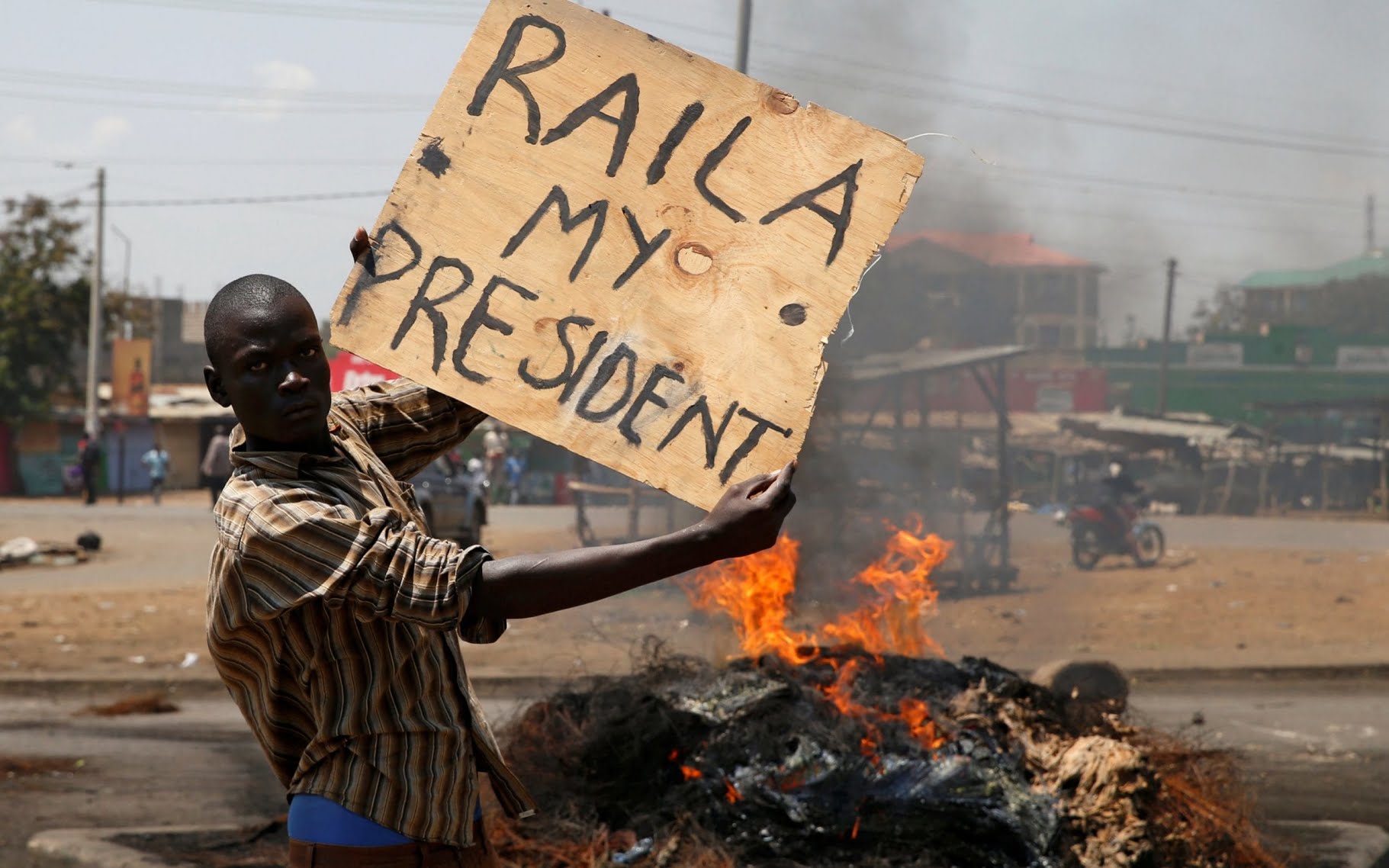 A Raila supporter flashes a placard during the chaos that erupted in Kisumu after Uhuru was declared winner.

Life is based mainly on the pillar of security. The weak ones are taken advantage of. The secured ones make sure they brainwash the unsecured ones and make them voting bots. While the messed up Moi 8.4.4 system that offered and still is offering nothing other than a pack of bullshit to poor Kenyans who can’t afford education. Kenya still is fighting ignorance.

Kenyans are tired of being used by the secured ones and to use our poor people’s taxes to secure their respective securities invested in properties. Check, for instance, a phone less Late Biwot who has larger shares in H-Young construction company, a company that has taken almost 2 years to wind up, 1s Avenue in Eastleigh. A distance of estimated 3/4 Kilometer, wastage of time and public resources.

A dry inland port that we’re being promised by Jubilee government. A reliable source has indicated that the Kenyatta family is having a hand in the share of the piece of land from that area. Well, this is a clear copy of the secure securing their respective securities.

A word of advice to the poor hardworking minorities, your security is voters card and that vote. In a
scientific assumption, we both have brains, but it’s a few that uses this vital organ. One vote to a stupid person and the economy will have to carry the burden for the coming 5 years.

In a country, Kenya, that is still suffering from poor leadership and governance. And in this era, we’re still fighting ignorance. While other states are busy building their individual economy and investing in future immortal defense systems. We have nothing much left but a vote to the right person. Someone who means good for this country. This is why we need Raila Odinga in the state house.

Related Content:  David Ndii: Stawi Banking, Another One From The Kenyatta’s On State Capture

Well, Raila Odinga has been through thick and thin. Both on his personal life and on the line of public duty. He Has survived attempts against his life. And is still holding the wish of the people. A vote for Raila is a vote for better future.

Kenya’s current economy is scathed by the rule of Jubilee mediocre. They’ve dismantled everything from mainstream media to hiring cheap wankers on social media. The society is infested by tribalism that is being driven by Jubilee bots. The economy is at its worst end. The worst part is the foreign debts that we’ve been driven to. A child born today in The land of Kenya, immediately after crying, s/he has a debt of over 80thousand in Ksh. This is accompanied by harsh economic life ahead of it. With almost every hope to a better life stagnant.

Time to secure our securities. If you don’t have any, vote for a better future. Vote for Raila Amolo Odinga. This is a better security, for now, and for the future. Let’s converge and have ourselves the better leader to reclaim this torn apart country.

Opinions expressed are writers own and doesn’t necessarily represent that of Kenya Insights.