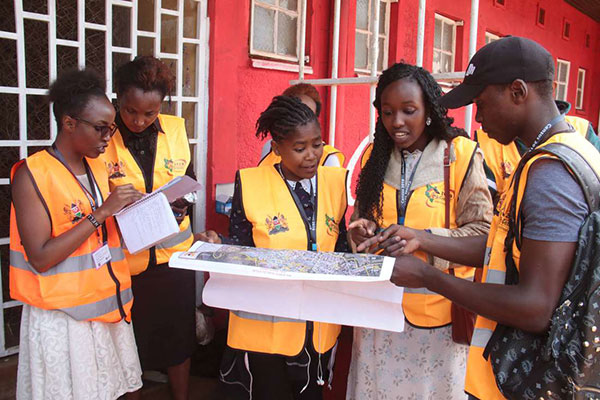 Enumerators study a map while preparing for the census. PHOTO | NMG

About 9, 000 enumerators who participated in the eighth national census in Kiambu are yet to be paid for their part time services. They claim their ICT personnel and supervisors counterparts have already been paid and are now calling on the Kenya National Bureau of Statistics to hasten the payment process.

The residents from the the counties whose CEO is the worst performing in the country said their patience was running out and demanded for their pay saying it was discriminating to only pay a section of the workers, while the people who did the donkey job did not receive a cent over a month later.

Speaking to the press, the Kiambu residents expressed their displeasure with the Kenyan government. “I do not think that it is fair for some people to be paid and others to be left because we all carried out the given job at the same time so we should all receive our pay at the same time. It was something that was placed in the budget and we know the money is there. What we do not understand is why they have not paid us,” George Ndegwa a disgruntled enumerator stated.

The residents also accused the government of coming up with schemes to rob them off their hard earned money. The enumerators raised their concerns after a purported list made rounds on social media singling enumerators who would not be paid for the exercise, they stated that they had seen a list circulating on their WhatsApp groups with pages of people who were not going to be paid making some of them fear for the worst.

“We have our own WhatsApp group and there was a list that was forwarded to us by our colleagues from other locations with names, locations, county’s names, number of the enumerators and it stated that they should not be paid because of either not returning all that was given to them or for returning a cracked tablet and I can say that list has created a lot of tension since some of us view it as one of the scapegoats the government is trying to initiate so that we do not get paid,” Beatrice Maina claimed.

The enumerators have now threatened to mobilize people and protest on the streets of Kiambu and other sub-counties if they don’t receive their dues. “We feel left out after realizing that some of our colleagues have already been paid.”

Kenya Insights allows guest blogging, if you want to be published on Kenya’s most authoritative and accurate blog, have an expose, news TIPS, story angles, human interest stories, drop us an email on [email protected] or via Telegram
Related Content:  The State's Muscles Flexing On NMG Journalist Walter Menya Sends A Chilling Message
Related Topics:
Up Next