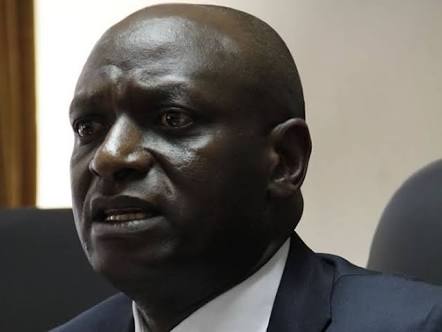 The billions have been lost in the process of replacing the country’s oil pipeline through alterations to tender documents to justify inflation of costs and skewed award of tenders for different works.

At least Ksh16B may have been lost through wasted investments in phased upgrading of systems between 2008 and 2014, while a whopping Ksh35B has been expended on a white elephant project to replace the ageing pipeline in a tender contract awarded to Lebanese firm – Zakhem International.

A further Ksh18B could go down the drain if the contractor finally gets paid claims following delayed completion of the project as a result of granted Extension of Time requests, which could take the total amount of money lost in the project to Ksh74B in 10 years. While the the original project duration was to be just over 20 months, the contractor has requested for five EOT’s leaving the project 28 months behind schedule.

Strangely, already, KPC management have approved a payment of Ksh4.4B to Zakhem, who maintain they must be paid their full claim of Ksh18B due to the delays. Ordinarily, in contract terms it is the contractor who is supposed to pay KPC in form of discount on the total tender costs because it is the contractor who requested for the extension of time.

The approval of the first EOT around February 2016 was done against the advise of the then project team, who were all removed and friendly individuals appointed. The new team approved the EOT’s that should not have been granted in the first place so as to appease their collaborators in management and the board.

Replacement of the 14-inch pipeline was envisioned upon its commissioning way back in 1978, the strategic plan putting the upgrade to a 16-inch pipeline in 2016. Under the plan, the project was to be implemented in phases starting with the upgrading of electrical, mechanical and control systems which was successfully done in 2008 at a cost of Ksh3B.

Phase Two was to include the installation of pumps in even stations at Samburu, Manyani, Makindu and Konza; which phase was concluded in 2010, costing Ksh10B. This was meant to double the flow rate to 800 cubic metres per hour before the final phase of installing third pumps in all stations to attain a further increase that would settle the flow rate at 1,200 cubic metres per hour. This final phase was concluded in 2014, costing the exchequer Ksh3b.

While sources suggest that the Ksh16B spent on the first three phases had been highly inflated, it is the fourth phase of the project that has seen the greatest plunder of public resources.

Kenya Pipeline had budgeted Ksh16B for the replacement with a 16-inch pipeline, which cost was to be borne by the company and the process was started in the final quarter of 2012. KPC appointed a consultant whose immediate task was to spearhead the bidding process for pre-qualification – 13 firms emerged successful at the end of the initial stage concluded in 2013.

KPC appointed a project team, who worked with the consultant to prepare the tender documents which were to be sent to the pre-qualified companies in February 2014. This is where drama started to unfold.

Curiously, the management and the board suddenly changed the scope of the works and instead of replacing the line, the project team were given two weeks to redo the tender documents for construction of a new line as a 20-inch infrastructure.

This essentially meant that the upgrading from 14 to 16-inch in the first three phases between 2008 and 2014 was a waste of money as the new scope of works would entail installing anew all pumps, mechanical, electrical and control systems as well as pump rafts.

As a result of this unexplained decision, the Ksh16B spent on phases 1,2 and 3 had gone down the drain as the infrastructure was obsolete.

The financial impact of the new contract increased the cost of the project by an additional Ksh35b; which money KPC opted to source through a syndicate bank loan, which was to be repaid starting from July 2016. Experts questioned, not only, the projected cost saying it was inflated but also the rationale of such a huge infrastructure that could lead to idle capacity considering the demand.

The current uptake to Nairobi which also serves Western Kenya and neighbouring countries stands at 13,000 cubic metres per week, meaning that with the new 20-inch line capacity to pass up to 200,000 cubic metres, it would only take three days to satisfy the demand and as such it would not be of any economic value due to high idle capacity of four days in a week.

“So we have in essence gone ahead of ourselves on time by building something we do not need now. But of course the point here is to find a way of eating public money.”

The award of the tender to Zakhem was irregular as it has been established that the company had been given the contract with KPC very well aware that the company been blacklisted in several countries including in Nigeria and Liberia, had a history of non-performance by not completing projects and generally lacked the capacity to execute such a project. 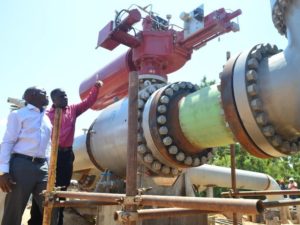 KPC MD Joe Sang during an inspection on the pipeline in Mombasa.

“It is obvious that they bribed to get the contract and the management and board members knew exactly what was going on,” a source privy to how the tender was issued said.

“There is no possible way that they (Zakhem) could have got the tender had the evaluation been done competitively because when you look at how they were scored, it is clear that everything was pre-planned.”

The above position was corroborated by documents obtained from the Public Procurement Administrative Review Board in Review No. 24/2014 of 11th June 2014, where China Wu Yi had contested the award of the tender to Zakhem. The Chinese company presented the lowest bid of Ksh45.7billion against Zakhem’s Ksh48.5b.

In their submissions to the PPARB, China Wu Yi submitted that the process was skewed on the basis that they received their regret letter on June 3rd2014 yet that was the same day KPC said they had opened the financial proposals.

They contended that it would not have been possible to open and peruse the financial bids and award the tender on the same day. According to them, this was evidence that the entire process was pre-meditated.

KPC won the case, but still lost Ksh3B in legal fees that could have been avoided had the process been transparent.

The quality of the works being done by Zakhem on the 450-kilometre Line from Mombasa to Nairobi have been questioned and the safety standards are also on the spotlight.

It is understood that around September 2015, Zakhem wrote requesting to lower safety standards for the 14 motors, claiming there was no company in the world that could manufacture the 3-megawatt capacity motors specified in the contract.

They were seeking approval to downgrade from Exd (explosion proof to prevent motors from exploding in the event of a fire) to Exn (explosion-proof but of inferior quality). However, a project team meeting to discuss the matter was informed that there were manufacturers with capacity to produce motors of up to 32-megawatt capacity; which information split the team and led to some of the members being ejected and eventually dismissed.

Legend has it that while the entire team of engineers who sat in the project team panel were opposed to the downgrading, some of them “were talked into compromising their position except three” so they were outnumbered to influence the final outcome of the decision.

“The argument was between those saying that if the downgrading is approved then the contractor needed to give a discount on the total tender value on motors,” says a Kurunzi source.

“The consequence of failure to get the discount was that KPC lost at least Ksh200million because they are getting something cheaper than they have paid for.”

Summary of projects and monies lost

Other questionable projects include purchase of land in front of KPC headquarters, valve automation and procurement of security consultancy services, among others.

A further close to Ksh5b may have been lost through theft of fuel, procurement of composite sleeves, procurement of hydrant pit valves and construction works in Kisumu where 400 metres of a wall were done at a cost of Ksh154million which loosely comes down to Ksh385,000 per metre.

KPC need to answer as to whether they did a due diligence on Zakhem following reports that the same firm had been blacklisted in Nigeria, Liberia and Ghana. And a clarification if they had broken their own tender rules by accepting a bid bond by Zakhem issued by Ecobank Nigeria, in spite of their requirement of a bond from a bank operating in the country.

When going for the culprits, the investigations must not leave out the energy CS Charles Keter who by statute of the office is in the middle of all these scandals. The DPP and DCI must therefore not spare the rod and bring the whole cartel down. The MD and the entire procurement and financial units must be brought to book. We’re following to see who’ll be left out as word moves around on imminent arrests.

Leaked Intelligence Report Details The Deep Corruption At Kenya Pipeline And How CS Keter Was Bribed With Sh100M, MD Sang Sh35M And A Mr David Muge In The Controversial Zakhem Deal

Part I: Mega Corruption At Kenya Pipeline, The Sh70B Theft MD Joe Sang CS Keter And Suspicious Firms That Must Be Investigated And Arrested