Jubilee is indeed committed to not only break apart this country with foreign public debts but also making sure the youths never gets a chance to get employment leave alone leading.

From appointing old, inexperienced and uneducated folks to heads parastatals to now appointing old men who, like in this case, died more than a year ago. Ghost administration appointing its spirit to say the least.

Yesterday, Cabinet Secretary for ICT reappointed The late Robert Kochale to KFCB. According to records, the late Kochale died on 29th May 2018 while undergoing treatment at the Aga Khan University Hospital.

What comes as a surprise, the death of the former KFCB board member was publicly announced and even his burial ceremony attended by senior government officials including those from the ICT ministry. His demise was also gazetted by KFCB. 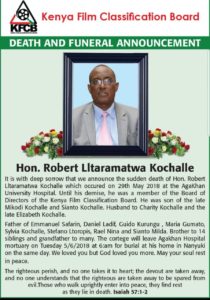 CS Joe Mucheru has not responded to this but KFCB boss Ezekiel Mutua came to his defence and said it’s not the mistake of the ICT CS solely but a ‘small mistake’ from the appointment board. Here is what Dr. Mutua tweeted as a response to a tweet that a social media user, Dikembe Disembe had posted.

Small issue being blown out of proportion. The Board presented the notification to the Ministry for replacement and inadvertently he was reappointed. It was not CS Mucheru's mistake at all as the conversation started when KFCB was under under Ministry of Sports & Culture. pic.twitter.com/0e46d33awc

Here is the proof confirmation of the reappointment of the late Robert Kochella.

Related Content:  Was Captain Apollo Malowa Drunk In The Skies? 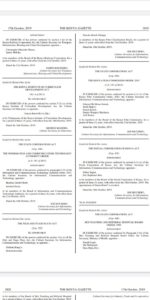 Yesterday, Kenya Insights published that Jubilee civil service workforce has on 17 per cent youths, and this reappointment of not only the late folk but also the aged has since attracted mixed reactions from Kenyans on Twitter.

Here are sampled tweet reactions from Kenyans concerning the “small issue” so they say.

This cannot be small because the man is entitled to a salary, allowances and holds a public position which had we not raised would have passed.

Wamlambez was small this is not.

Such SMALL issues have cost this nation, remember the computer ERROR when The BOSS was Finance Minister? Remember the other billions that were misappropriated, only to be confirmed that 7 BILLION was missing!

Such SMALL mistakes are not good.

… on that, I have nothing useful to add …. This may have been the game-changer for me to now make up my mind to finally join Jubilee … I have to belong to a Party that resurrects the dead.

JUBILEE.. just to show how fair and visionary it is has appointed a dead Kenya to be a board member of a state corporation…take it from me…at this rate MY BELOVED PARTY JUBILEE will rule Kenya for another 100 years…@WehliyeMohamed @DonaldBKipkorir @jamessmat @KoinangeJeff https://t.co/7AkxZyAF5h

Related Content:  Choice Of Mariga As Kibra’s Candidate Has Brought More Divisions In Jubilee
Kenya Insights allows guest blogging, if you want to be published on Kenya’s most authoritative and accurate blog, have an expose, news TIPS, story angles, human interest stories, drop us an email on [email protected] or via Telegram
Related Topics:Ezekiel MutuaICTJoe MucheruJubileekfcbKOTRobert Kochela
Up Next

Atwoli Reign Comes To An End