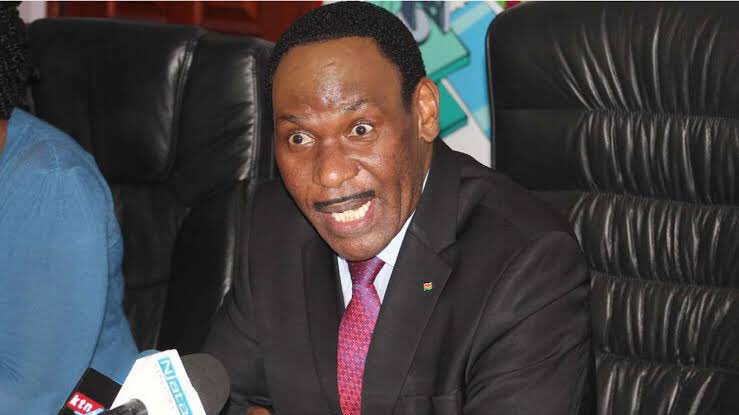 Kenya Film Classification Board boss Ezekiel Mutua has been left with an egg on the face just hours after insisting he was still in charge at KFCB.

Mutua even went ahead to preside over an official function Friday morning in Kiambu county, only to be sent on compulsory terminal leave awaiting the expiry of his contract in October.

Mutua commonly referred to as the moral cop for censoring films and songs with obscene content has been replaced by Christopher Wambua, Director of Public Communication CAK in an acting capacity for two months.

Earlier, Mutua refuted claims that he had been fired over alleged abuse of office and urged Kenyans to ignore what he dismissed as malicious rumours.

“My attention has been drawn to reports on social media to the effect that I have been fired as CEO of KFCB. PLEASE IGNORE such malicious rumours. I am not aware of such developments and there can be no grain of truth in them as there’s no vacancy in the office of the CEO KFCB” he said.

His response had been prompted by a tweet from Senator Mutula Kilonzo Junior who accused ICT CS Joe Mucheru of unlawfully sacking the KFCB boss.

“Ezekiel Mutua unlawfully removed by CS Mucheru as CEO after being lawfully appointed by the board. Laws are mere suggestions for this administration,” Kilonzo Jnr tweeted.

There have been accusations that the KFCB boss is planning to extend his term in office without falling due process.

The unconfirmed reports further indicated that the State Corporations Advisory Committee (SCAC) had waded into the matter when it got wind of the scheme to renew his contract for a third term hence, asked the CS to take disciplinary action against the KFCB Board.

Mutua who has served at the helm of the Kenya Films Classification Board for six years has always been at the centre of controversy over his strict directives.

It emerges that Mutua who’s been baptized deputy Jesus’ given his delusional moral standards that often put him in the wrong with Kenyan artists most of whom he frustrated with his position to stall creativity,had schemed to extend his term in office and beside, is also now under corruption investigations.

According to document seen before Kenya Insights, EACC has launched probe into Ezekiel Mutua and a Board Member Ms Gathoni Kungu over alleged Irregular payments of Salaries and Allowance.

Ezekiel Mutua unlawfully removed by CS Mucheru as CEO after being lawfully appointed by the Board . Laws are mere suggestions for this administration

The anti-graft commission has asked the film board to facilitate them with relevant documents to conduct the investigations in which the CEO is alleged to have paid himself millions outside the set salary and allowances pointing out to a massive corruption.

Mutua, is not new to accusationsaccusations of theft, the once the secretary general of Kenya Union of Journalists and journalists are not best friends and their reasons are many. Chief among them is KUJ Awards fiasco of 2006, where prize money and television sets, meant for winners, did a disappearing act.

While journalists talk about the incident, Mutua — who is perched on KFCB’s plush 15th floor office at Uchumi House — wants to forget it. Completely. He does not even want to talk about it.

So @EzekielMutua you blocked me but l will still keep reminding you that you’re a thief,you stole TV’s,cash and switched the winners list at Kenya Union of Journalism awards in 2005. Have you told your followers your greed killed KUJ? pic.twitter.com/TOdAEBcfPn

Mutua has been in the news more times than a news ticker for his new role as a moral police who is on a banning spree. Mutua’s juggernaut has left multiple victims in its wake. Ask beer giants, East African Breweries; or the manufacturer of condom brand, Durex. Or, for that matter, ask Coca Cola, whose soft drink advert was deemed to have crossed his regulatory red line.

#AmKenyan 1. @EzekielMutua is a thief. @EACCKenya @ODPP_KE @DCI_Kenya should also investigate if tax payers money was stolen to buy himself a vanity award from EUROPE where he even sent his juniors to ‘receive’ on his behalf in 2018. He then blocked many of us for exposing him. https://t.co/dnZzZ5iNcg

Kenya Insights allows guest blogging, if you want to be published on Kenya’s most authoritative and accurate blog, have an expose, news TIPS, story angles, human interest stories, drop us an email on [email protected] or via Telegram
Related Topics:Ethics and Anti-corruption Commission (EACC)Ezekiel Mutuafiredkfcb
Up Next