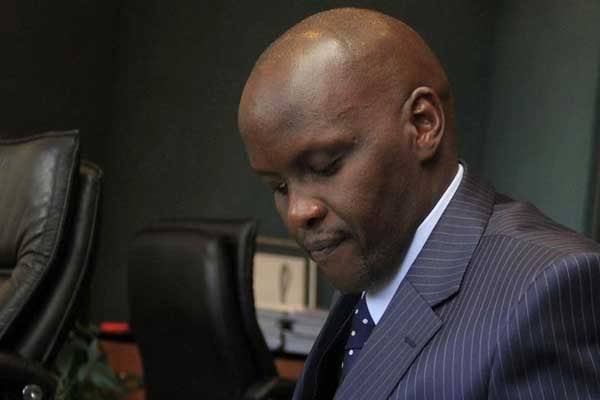 Following red flags in the system, DCI opened investigations into the alleged embezzlement of funds through theft by some oil marketing companies working in cahoots with Kenya Pipeline Staff By way of unapproved Fuel advancement to the OMCs.

This came at a time when Supplycor one of the KPC’s OMCs placed a loss of Sh1B to oil spillage and vandalism. This was acknowledged by the company’s MD Joe Sang who then took step to forward the bills to CIC Insurance Company.

The spillage volume and loss depth was not only exaggerated but opened a box of pandora on just how the OMCs collude with KPC to steal money from the public coffers. Private investigations were initiated as well to ascertain if indeed upto 11,000,000 of oil was lost to spillage and of losses registered were genuine.

The report in conclusion recommended further verification and auditing to completely clean up KPC and hold responsible the staff and OMCs involved in the scam. It is in this respect for further investigations that DCI summoned for questioning the following KPC staff suspected to be deeply involved in this oil theft syndicate;

In the investigative report, it was determined that there’s an elaborate fraud scheme by the OMCs and KPC staff in the oil theft. Several schemes were detected.

In establishing the cause, source and or nature of the loss, actions executed by players in causing the loss, investigators were deployed within terminus and JKIA compound. In an instance during the investigations, a bridger, cleverly not with active tracking device, was spotted at a petrol station in Mlolongo selling jet fuel as kerosene.

Investigating Operations accounts procedures and part of airside at JKIA where the theft also plays. Investigators established that, there were missing Aviation Delivery Receipts(ADRs) and that KPC don’t have control of refueling at the airside leaving everything at the mercy of the OMCs. A disaster.

KPC lacks boundary meter to show actual volumes delivered at the airside leaving space for manipulation. Even though the report acknowledged loss of product, it established too that  OMCs were perpetuating theft of product at the airside which they had total control. Ideally, the OMCs are expected to present their ADRs instantly, they delay issuance sometimes for upto 24 hours probably to create time for manipulation in the theft schemes.

Investigators monitored all pump overs to the OMCs with operations and shockingly discovered that despite no physical proof of spillage of oil, the OMCs continued to report loses as a part of the theft plots.

A huge disparity was noted between the ATG movements to the UFM meters and this how a scheme was unearthed. A KPC official liaised with OMCs to wrongly calibrate the meters a fraudulent plot that led to an average loss of 50,000L monthly. Money which goes into their pockets and those in the chain.

Investigations following into an alleged water drain done in May 4th this year leading to a loss of 86 c.u M due to apparent water ingress opened yet again another scandal.

Staff who had claimed to have witnessed the drainage were found to be lying as it was established that none was present and neither entered the tank farm going to show the complicity in the theft. A deliberate effort was initiated by the staff to transfer the cooked loses from the drainage to the western line. Report recommended prosecutions of KPC staff involved in this elaborate scam.

Despite the investigations acknowledging loses due to spillage and illegal connections, documentations couldn’t tally with the 11,000,000 loss declared going to prove a plotted scam.

Pumping Water In Place Of Oil

Investigations found excessive water in the system in which it was established that companies in operation weren’t in full compliance with the line field requirements.

It was established that some KPC staff were compromised by OMCs to pump water instead of oil. The water pumped is then accounted as stock leading to more losses to KPC. There are ATG water detectors in all tanks such that water can’t pass through undetected, however, when pumping the water as oil, the detectors are strategically disconnected.

In summary, there’s elaborate scam by the OMCs To Steal Oil then place false claims of loss to get compensation from the insurance. It also doesn’t make sense as to why KPC should be covering the insurance and not the companies.

John Munyes the Petroleum and Mining CS has already received the report in a replying letter to KPC MD Sang he says, “the findings of this report seems disturbing noting its conclusions.” Despite having full knowledge of the scandal, the CS is yet to take an action on this theft instead dancing around the issue prompting our curiosity on this levels of his involvement in the chain given his jelly reactions. He either act on the report or come out clean. He can’t act only if he was a beneficiary, knowing Kenya, nothing can be surprising.

Supplycor Ltd which placed a Sh1B loss is just hit one of the many OMCs, this is just a hint of the bigger syndicate now rope in the rest and see the billions being swindled. Why do the OMCs claim loss of oil that is in KPC’s custody, shouldn’t it be KPC noting the loss itself?

Curiously, these loses aren’t captured in the KPC’s annual financial report at least according to the latest that we’ve seen. These loses have become a norm year in and out yet things remain the same, it’s unclear what measures have been put on place over the years to avoid continually losing oil through spillage in order to stop claiming insurance every year.

Whats taking the DCI and the ODPP to arrest and prosecute this open theft that is costing the taxpayer billions annually. The DCI have the names of perpetrators who are not only walking free but still in office a matter that is disturbing given that the board has the mandate to sweep clean the office. The question is how long and how much more of theft orchestrated by management will it take for a serious action to be taken.

In the subsequent series we move to individual OMCs and how deeply involved they’re in stealing oil money with already named KPC staff and how money exchange hands including other players in the insurance companies. If you have any information in this respect and or any other valuable tip, email me ([email protected])

Forgotten Files: Reviving The Case Of Bernard Masiga Ayienga The NYS Theft Suspect Living Like A King On sh160,000 Salary