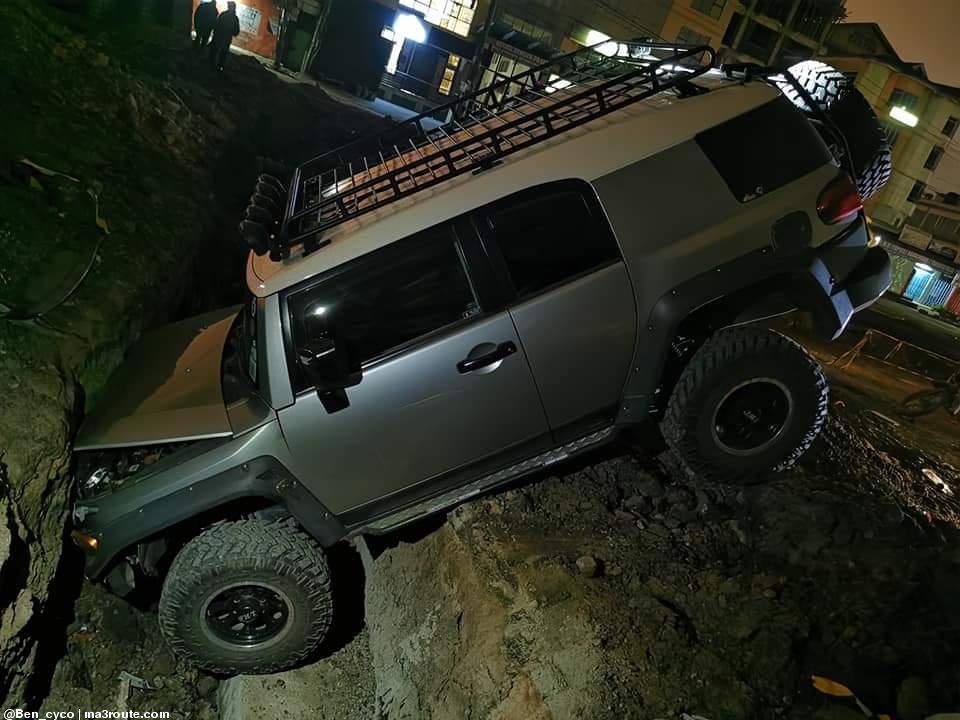 The tunnel, according to Leon, was dug across Ngong Rd and left unmarked trapping 444 rated machines.

That unmarked ditch on ngong rd has a TA but @KURAroads surely!? pic.twitter.com/3jVDePTFY1

The tunnel had trapped a Range Rover Sport, V8 and an FJ Cruiser. From the pictures, this indeed the most expensive tunnel in Nairobi. Are there no other models of vehicles using that route? Kenyans on Twitter asked.

That ditch is swallowing serious rides only ?

The ditch has expensive taste.

This is phase 3 being undertaken by the Chinese and fully funded by the Kenyan govt. It shows.

???finally some light at the end of the tunnel

Personally, I think this ditch was organized and planned by insurance cartels, lawyers liaised with KURA folks to create a ‘normal’ accident scene so that the owners file for claims. I mean, this explains why its only high-End vehicles involved…

@felixokari1 I told you not to share the first pic until the insurance comes through! ?

Before and after pics are important fam!

The contractor should be sued for not putting up the proper signage to notify road users. This shitty contractor needs to pay

Related Content:  Fraudulent Hospitals Unmasked in the NHIF Audit report.
Kenya Insights allows guest blogging, if you want to be published on Kenya’s most authoritative and accurate blog, have an expose, news TIPS, story angles, human interest stories, drop us an email on [email protected] or via Telegram
Related Topics:CruiserHigh endKURANgong Roadrange roverV8
Up Next