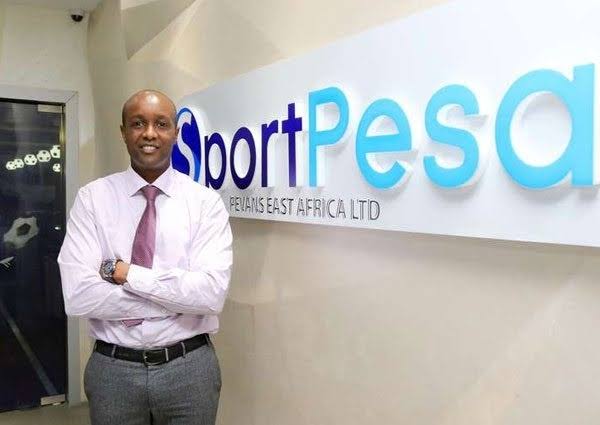 Arguably, Sportpesa is one of the biggest sports local sponsors in Kenya. They sponsor clubs across from rugby to football. However, according to KRA, it’s a gimmick to evade tax. Sportpesa is the leading betting firm in Kenya amongst the many that are on the chopping list the government.

SportPesa and 26 other betting firms including Betin, Betway Eastbet and Betpawa have been out of business since July 11, when the government ordered telcos to shut down the playbill numbers and short codes after their licences were not renewed.

SportPesa has been locked in a bitter legal dispute with the Kenya Revenue Authority (KRA), which is demanding Sh10.3 billion in taxes dating back three years ago.

The taxman in May last year sent a demand notice to Pevans East Africa, the entity behind SportPesa, asking it to remit disputed withholding tax from betting game winners for the period between 2015 and 2016.

While the betting firm is trying and exhausting all relevant avenues to come back on board, all seem to hit the rag and turning out to be a blackmail campaign to have the government open the doors.

Grapevines have alleged that Sportpesa went as far as reaching out to Raila Odinga for an Intervention being the Gor Mahia patron that the firm sponsors and a big political heavyweight. However, we’re told their efforts didn’t bate fruits.

Our own independent views and observations has since realized the firm has gone on extreme PR drive using all influencers from politicians to social media personalities in selling their ‘sports sponsorship’ card to push the government into accepting them back.

We’ve complied a small list of the subliminal campaigns that also includes the media in their drive. 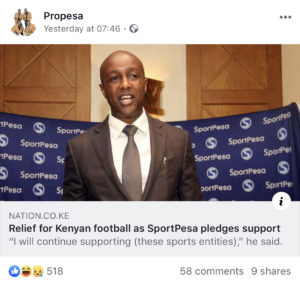 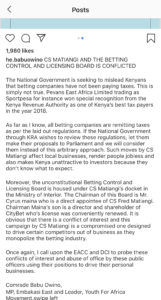 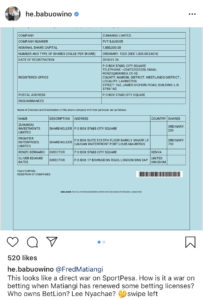 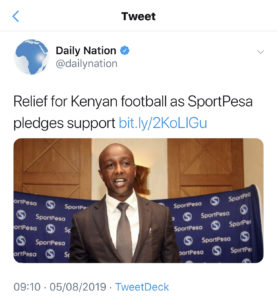 Truth of the matter is sports don’t necessarily have to hang on betting companies sponsorships, if you take for instance Wazito a local club which is amongst the top flourishing in the Kenyan league, it’s not sponsored by any betting market.

Notion being sold by Sportpesa and alike that clubs will fail of their withdraw their sponsorship in my view amounts to blackmail. Before Sportpesa and the rest came in, clubs survived and existed. It’s time for these clubs to think outside the box. These people are in business, this is no philanthropy.

Not so much adds up when it comes to how much Sportpesa makes andbwgat they invest in Kenya as Wazito CEO notes.

Thank you Mr Tony. 1 billion usd made only in Kenya in one year!!! Not even 1% of that was invested in kenyan youth or sport projects. https://t.co/A3l3VJWCSy

Wazito which is one of the fastest growing and stable local football clubs dint rely on betting firms for stability. What many don’t know is that firms like Sportpesa and Betin are in business and will obviously manipulate and exploit all spaces available.

I said it before, I am against gambling and it should be banned. This is why I said Wazito FC will never be having betting firm sponsership. We have clear source of income while other SPL teams rely on income from betting firms. https://t.co/hKRBhXgxrH

According to a recent investigations by UK’s Guardian Magazine, Sportpesa has been taking up to Sh100B from poor people in Africa and getting away with other without paying relevant taxes not only in Kenya but the UK.

As Kenya embarks on a clean sweep of the betting firms, they must not be swayed by PR campaigns as the ones we’ve just revealed on Sportpesa not adhere to the rules of the land and to ensure all requirements are met.

How Innocent Asian Girls Are Recruited Into Sex Rings In Kenya

Exposed: How Garissa Governor Korane And His Brother Used Family Owned Company To Steal From The Public