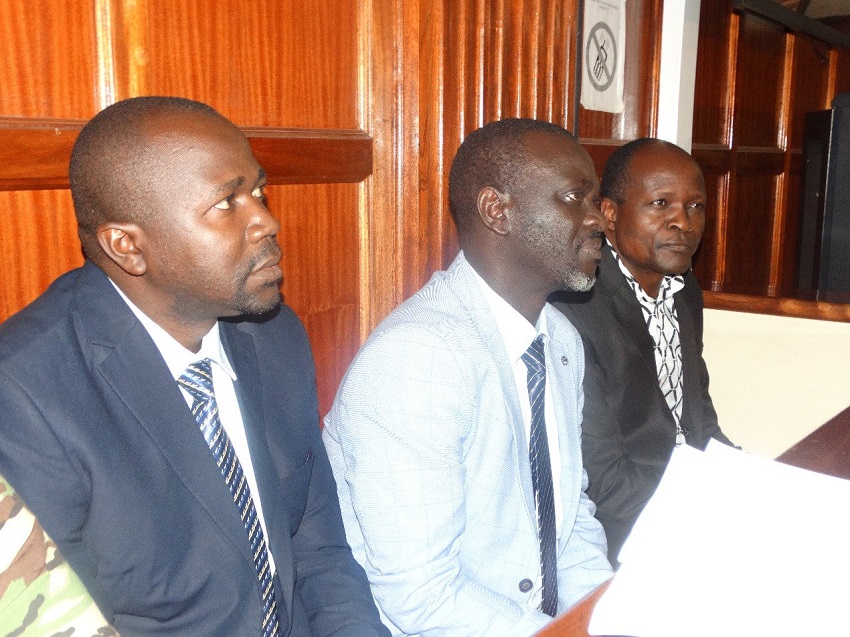 The hearing of a murder case against Migori Governor Okoth Obado resumed Monday at the Milimani law courts.

According to reports from the corridors of justice, the trial proceedings are being held in camera to allow some key witnesses under protection to give their testimony.

Obado who was in a relationship with 26 year old Rongo university student Sharon Otieno and the father of the unborn child is the main suspect in the murder trial.

He is charged alongside his personal assistant Michael Oyamo and Casper Obiero, a clerk in Migori County with killing Ms Otieno and her unborn child on September 3, 2018, at Owade in Rachuonyo subcounty, Homa Bay county.

They denied the charges before Justice Jessie Lesiit and in November 2018 the governor was released on a cash bail of Sh5 million with two sureties of same amount.

A postmortem conducted on her body revealed that she was stabbed eight times, strangled and raped.

Lilian Saka from the Department of the Criminal Investigation, DCI, also presented photographs to the court of how the bodies of the late Sharon and her unborn baby were allegedly discovered at the Kodera forest, in Homabay County.

So far, six witnesses from the 35 lined up by the State have given evidence.

Three years later, Sharon’s family is confident that justice will be served. Her mother Melida Auma who has joined politics and has set her eyes on the Homa Bay Town West ward seat on United Democratic Alliance (UDA) ticket is happy with the progress of the case.

Kenya Insights allows guest blogging, if you want to be published on Kenya’s most authoritative and accurate blog, have an expose, news TIPS, story angles, human interest stories, drop us an email on [email protected] or via Telegram
Related Topics:Governor Okoth ObadoSharon murder
Up Next

Uhuru: Pandora Papers Will Lift Veil Of Secrecy For Those Who Can’t Explain Their Wealth