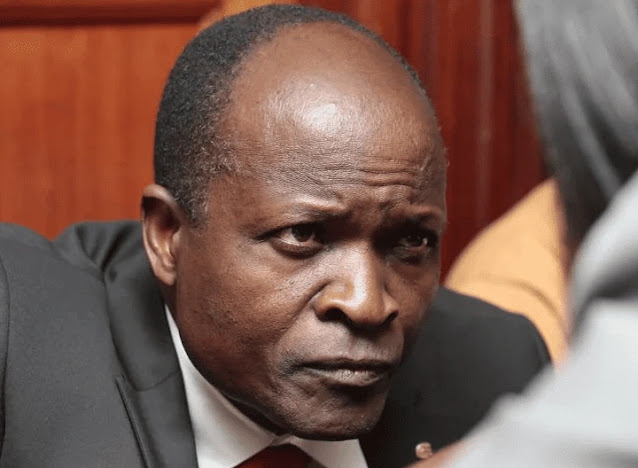 Migori Governor Okoth Obado has again been implicated in a scandal involving the alleged grabbing of land belonging to a family that legally bought the land from his late father. Governor Obado is not new to being linked to scandals that have shocked the nation. In 2018, the killing of a young woman Sharon Otieno and her unborn child hit the headlines and after investigations Governor Obado and his accomplices were charged with her murder.

In 2020, Governor Obado was also charged alongside his four children; Dan Okoth, Everlyne Okoth, Scarlet Okoth and Jerry Okoth with embezzling of over 70 million shillings stolen from county coffers. Both cases are still ongoing in court. In this recent allegations Obado is said to be grabbing land from Tom Otieno’s family that had been purchased from his late father in 1976. According to court documents seen by AmKenyan and interviews with neighbors who have been following the going ons on the piece of land for the last four decades, Tom Otieno’s family have undergone untold suffering and struggles at the hands of Obado and his family members who are hellbent on grabbing this land that once belonged to their father from its current lawful owners who own legally issued title deed of the 6 acre piece of land.

According to court papers, the land title deed number Kanyamkago/KATIENO/133 was issued in the name of Tom Otieno having been legally processed as required in law and payment of all agreed amounts on the sale agreement done.

It did not take long before Obado’s family started infringing on not just Tom’s land but also a host of other buyers that had legally acquired land within the area.

Following these repeated attempts at grabbing this land over the years Tom Otieno sued Obado and his father in 2015 in an attempt to stop them from forcefully acquiring the land that no longer belongs to them.

During the court process governor Obado’s father passed away. Tom Otieno proceeded to sue governor Obado’s brothers Daudi Okto Obado, John Odongo Obado, and Samson Obado who repeatedly continued to frustrate and threaten his family in an attempt to evict them from the land.The case, PMCC No 229, was filed in the Migori Senior Magistrates Court, seeking orders to restrain the Obado family from any interference and trespass on the said piece of land. The case has since suffered lengthy delays and postponement to great personal and material cost for Tom Otieno and his family.

In the last week a truck ferrying construction material forced its way onto the land and started prepping the piece of land to start building a house that allegedly belongs to one of governor Obado’s sons. This is in full knowledge of the court order restraining the Obado family from accessing the said piece of land.

‘’This shameful and arrogant behavior of corrupt politicians openly harassing and bullying civilians must be stopped and exposed. The open disregard of the rule of law by people in power must be condemned’’ said a concerned neighbor.

‘’The harassment the family of Tom Otieno has received on their own legally acquired land is both unfortunate and regrettable,’’ added another neighbor.  It must be noted that this is not the first time the Obado family has been implicated in land grabbing. In 2014, Jane Agona an 80 year old widow in Rongo appealed for governments intervention after governor Obado allegedly sent goons to demolish her house and proceeded to erect a fence and start construction on this widow’s land leaving her out in the cold.

Related Content:  Maralal Police Boss Shot Dead
Kenya Insights allows guest blogging, if you want to be published on Kenya’s most authoritative and accurate blog, have an expose, news TIPS, story angles, human interest stories, drop us an email on [email protected] or via Telegram
Related Topics:Governor Okoth Obado
Up Next