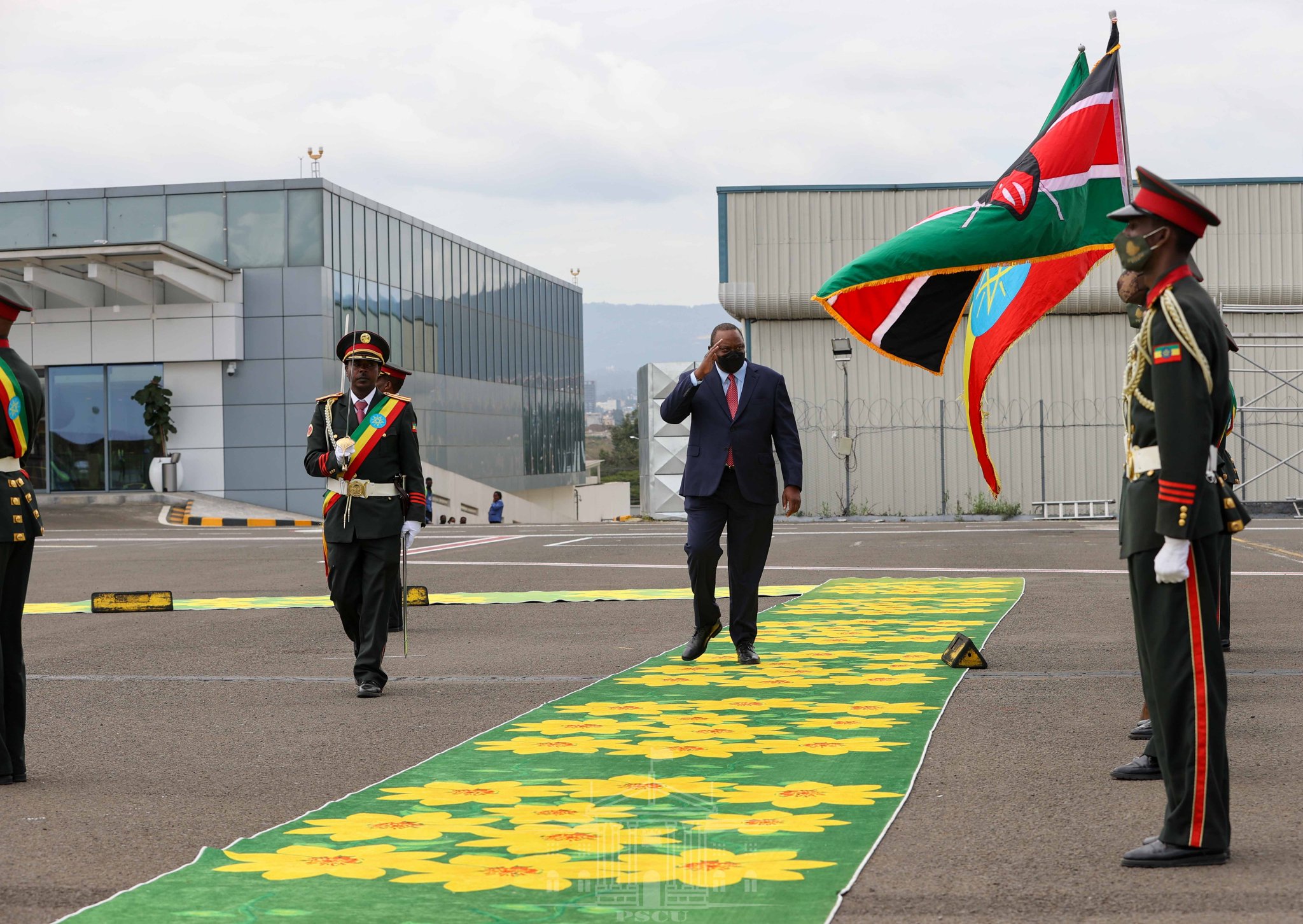 Kenyatta in Ethiopia for inauguration of Prime Minister Abiy Ahmed who was re-elected for second 5-year term.

President Uhuru Kenyatta in a quick rejoinder reply to the International Consortium of Investigative Journalism leak that linked his family to Sh3.3B stashed in offshore accounts, has welcomed the report saying such “will go a long way in enhancing financial transparency”.

The President who’s currently in Ethiopia for the inauguration of the Prime Minister en route the United States, say that he will be giving a comprehensive reply to the report that ties his family to billions in offshore firms.

In a brief to the media, Kanze Dena. statehouse spokesperson, Uhuru said, “These reports will go a long way in enhancing the financial transparency and openness that we require in Kenya and around the globe.”

“The movement of illicit funds, proceeds of crime, and corruption thrive in an environment of secrecy and darkness.”

Uhuru also said the Pandora Papers and subsequent follow-up audits will lift the veil of secrecy and darkness for those who can not explain their assets or wealth.

This comes at a time when Kenyatta’s critics predominantly those allied to his deputy who’s a friend turn foe, have been celebrating the expose which I’m they view as the final fall and an eye opener.

When you preach water and drink wine! This guy lectured us day in & day out on corruption yet it’s the only thing he leads from the front on! Thank God for intentional media as he has managed to muzzle local media. Appears his 40 days are up! #PandoraPapers #Client13173 pic.twitter.com/6sQTzM30Ww

As I was telling you…
“Uhuru Kenyatta’s presidency has injected fresh energy into his family’s commercial empire expected to consolidate its position as one of the largest business dynasties in Kenya.” BD 11 Nov 2013 #PandoraPapers

The report said Uhuru and six members of his family secretly owned a network of offshore companies. According to Finance Uncovered, the Kenyatta family has used other offshore companies to buy two more properties in the UK.

According to the ICIJ, Mrs Kenyatta and her daughters were advised by experienced international wealth experts from the Swiss bank Union Bancaire Privée (UBP), which recruited Alcogal, a Panamanian law firm specialising in setting up and administering offshore companies.

The consortium says invoices from Alcogal to the bank show that the Swiss advisers referred to the Kenyattas with the code “client 13173”.

Alcogal provided a registered office for Milrun on the largest of the BVI islands, Tortola, and supplied staff members to act as the company’s official directors.

The result was an entirely anonymous company that could not be traced back to the Kenyatta family.

This company was used by Mrs Kenyatta and her daughters to buy an apartment in central London, which it still owns, according to filings at the UK Land Registry seen by Finance Uncovered.

The prime property, which was until recently rented by British Labour MP Emma Ann Hardy, is now estimated to be worth close to $1.3m.

The foundation was registered to the offices of Alcogal in Panama City, and was nominally run by board members from the Panamanian law firm.

It was set up for the benefit of Muhoho Kenyatta, with his son Jomo Kamau Muhoho, as successor.

Another BVI company which Mr Muhoho owned had a $30m valuation in stocks and bonds as of November 2016.

A search of public records in BVI and Panama found that most of the companies linked to the Kenyattas are now dormant, some of them as a result of non-payment of regulatory fees.

It’s not illegal to run secret companies, but some have been used as a front to divert money, avoid taxes and for money laundering.

The Pandora Papers, however, show no evidence that the Kenyatta family stole or hid state assets in their offshore companies, BBC says.

In 2018, Mr Kenyatta told the BBC Hardtalk programme that his family’s wealth was known to the public, and as president he had declared his assets as required by law.

“As I have always stated, what we own – what we have – is open to the public. As a public servant I’m supposed to make my wealth known and we declare every year,” Mr Kenyatta said.

“If there’s an instance where somebody can say that what we have done or obtained has not been legitimate, say so – we are ready to face any court,” he added.

Coming at an election time and when Kenya has started voters registration, it was expected for the matter to take a political turn with William Ruto who has long been linked to endless numerous corruption scandals and baptized the alliance’s senior thief, to turn his guns on the president perceived to be the clean one.

As it seems, the battle will hit the ground should the investigative agencies decide so and if the President lives to his words, then everyone will have to explain their wealth, question is, who has a clean hand? The game goes on.

Kenya Insights allows guest blogging, if you want to be published on Kenya’s most authoritative and accurate blog, have an expose, news TIPS, story angles, human interest stories, drop us an email on [email protected] or via Telegram
Related Content:  Why Visiting US Secretary Of State John Kerry Refused To Meet DP Ruto Forcing His Impromptu Visit To Mombasa
Related Topics:Client 13173Pandora PapersUhuru KenyattaWilliam Ruto
Up Next