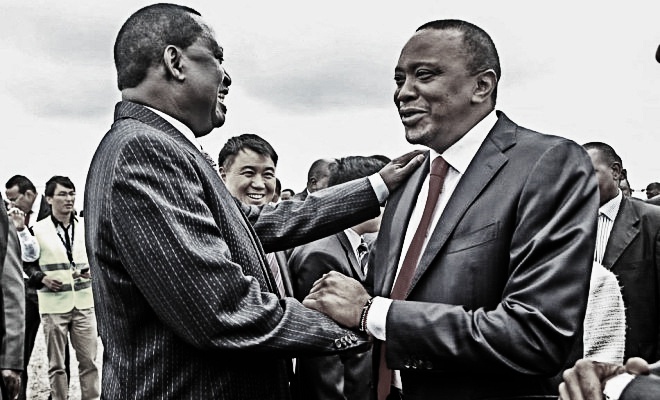 By Nicholas Olambo
The political journey of Raila Odinga should be a series of harsh lessons, but has he learned enough? He has been detained and exiled, but he never gave up, he championed the second liberation force and had given a shot at the presidency three times, losing, being rigged out and losing/ being rigged out.

He still has his eyes set on the prize, but folks have been writing stories describing him as a contender left with ‘one bullet,’ 2017 is his do or die contest, but these are illusions he has refuted. He says he is well prepared with more a single ‘bullet’ should he be nominated to fly the opposition flag. As things stand Raila is the possible opposition candidate with polls rating the incumbent President Uhuru Kenyatta ahead of him.

Odinga was beaten by President Uhuru in 2013; he challenged the results at the Supreme Court, but the court’s verdict maintained the status quo. He respected the court’s ruling and moved on keeping a keen check on Jubilee administration, revealing all mega corruption scandals that have rocked President Kenyatta’s leadership. It’s now a see through administration poked with corruption holes all over, from the infamous NYS scandal, Eurobond, Youth Fund and 5 billion Afya House scandal among others. It’s said to be the most corrupt in Kenyan history.

Odinga has managed to make corruption his key campaign agenda to discredit the Kenyatta led Jubilee administration, and with 2017 just seven months away, the numbers seem likely to tilt for the opposition but will Kenyatta sit back and go in history as a one-term president? Beating incumbents in Africa are ‘a miracle.’

Political analyst/jubilee strategist Mutahi Ngunyi who was the brainchild of ‘tyranny of numbers myth’ through which Uhuruto twisted the ICC narrative and rallied their large tribes to win 2013 polls is now singing a different song. With the fast shaping NASA, a united front through which opposition leaders may challenge President Kenyatta, Ngunyi says the myth is no longer viable. NASA is more like NARC in 2002, an unbeatable force.

In fact soon after Kenyatta assumed office in 2013, Ngunyi described Mr. Kenyatta as a greenhorn president, but I think Kenyatta is ‘a tactical and smart’ fellow. He his trapping Mr. Odinga in his comfort zone and will ‘beat’ him hands down. The recent chaotic special sittings were deliberate; Uhuru may not even sign the draconian election bill into law. Already there is enough pressure on him from the opposition and religious leaders asking him to rise beyond party interests and reject the controversial draft law.

The cord is already bracing the country for street protests in January should the bill be signed. The opposition has described the laws as a ploy by Jubilee to rig the coming polls. In 2013, Cord claimed that Jubilee stole elections by hacking IEBC systems and altered results for TNA’s Uhuru Kenyatta. Mr. Odinga can’t substantiate this well; their evidence was rejected by the Supreme Court as huge and time bad.

Raila is claiming that they will not allow elections rigged but what will he do if he can’t substantiate how he was ‘beaten’ in 2013? The same technique will be used on him again; I doubt if he’s determined to keep the check on his competitor’s digital rigging tricks. We are in a digital era, and Jubilee is known to be pro digital. Any schemes to revert to a manual system are deliberate moves to trap Odinga to reject the manual backup system, so they all go digital and ‘beat’ him there. If anything Baba is used to being ‘beaten,’ he will accept and move on.

Related Content:  Junet Mohammed Fires Back At Jubilee over Withdrawal of Gov's Joho And Kingi Security

In the last elections, the opposition accused Jubilee of working with hackers and Safaricom who operated the servers to manipulate polls. From them how prepared is CORD to repel and expose such schemes should they arise. Grapevine has it that the State has constituted the group of sharp IT gurus drawn from local universities, Russia, and Chinese computer wizards to do the 2017 dirty jobs.

While these remain mere speculations, we know the miles player at hand can go. CORD must or by now should’ve hit the computer wizardry world to shop for the brightest minds to monitor the system from their center to detect at the slightest chance any mischievous move during polls. Electronic voters identification is a blessing to CORD and a nightmare to Jubilee who are accused to be scheming on using dead voters to push up their numbers given unfavorable current voters register dynamics. All parties must be at alert IEBC must give nothing short of free, fair, credible, verifiable, tamper-proof, healthy elections. End of discussion!

With Speaker Justin Muturi And Aden Duale In Parliament, Kenya Is Yet To See The Worst From The Eccentrics