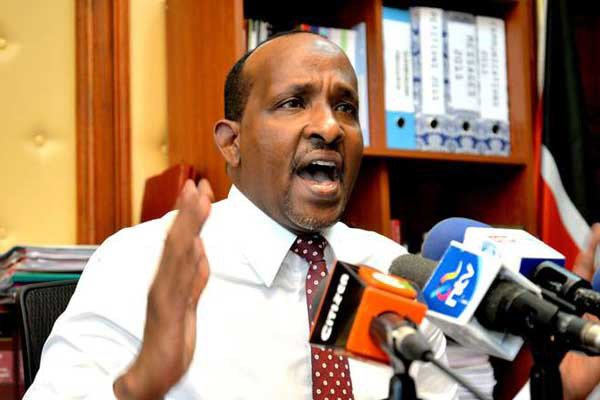 Kenya and the world have been treated to the worst of theatrics in parliament during the past days in exceptional settings set to discuss electoral reforms with Jubilee wing rooting for manual back-up of a voting system and opposition insisting on the digital and the negotiated amendments to be sustained.

The debate as expected was marked with extreme violence with the house turned into a chaotic market with reckless traders. Reports of physical fights between the MPs flew around. And it’s during these sittings that dictatorial smoke signals were sent. The parliament building in a long time since Moi era was completely barricaded and heavy anti-riot police deployed in an apparent intimidation move by the executive who wanted the law passed by all means necessary. Journalists were denied access to Parliament’s media gallery, broadcast signal switched off, internet shut. This a 2017 smoke signal coming at the time when credible suspicions that the government will lock out the internet during next elections, thrives.

The ugly face of August house with primordial debates presided over by House Speaker Justin Muturi. Muturi has brought the insanity in parliament given his partisan stand and blind sycophancy to the executive. Muturi is a tribal chief placed in a high office. The speaker has brought shame and crashed the credibility and integrity of a powerful institution. Unlike his predecessors as Kaparo and Marende both of whom has political affiliations but kept professionalism ahead by remaining neutral, Muturi like swallowing a whole watermelon fruit is finding it hard to hide his allegiance to political lineage.

Related Content:  This Man Governor Joho And The Rich Muslim Voting Block , What Worries Statehouse Most

Parliament is an institution that ought to provide social and political unity. However, blind political loyalty and desperation for correctness politics have caused Parliament to serve primarily as a public forum for the ventilation of grievances rather than a law‐making body and unifying institution. Members should have a difference of policy but not trapping the country in the rut of immature and hollow politics.

Most of his legislative decisions are biased and bring out someone who plays political marionette role. He has significantly eroded the reputation and credibility of the House, lowering the quality of the debate and work of the National Assembly. He poses the threat of returning Parliament to old days of executive control or appendage. Commission on the Implementation of the Constitution (CIC) has gone to court seeking a declaration that Honourable Speaker Muturi is unfit to hold public office.

The office of Speaker is one of prestige, splendor, and authority. The office of the Speaker occupies a pivotal position in Constitution and instilling culture of constitutional democracy. While the MPs represent the individual constituencies, the Speaker represents the full authority of the House itself. The Speaker symbolizes the dignity and power of the House over which she/he are presiding. Therefore, it is expected that the holder of this office of high dignity has to be one who can represent the House in all its manifestations.

As long as Muturi retains the seat and Kenya heading to the elections, we’re yet to see the worst as he’ll oversee even the most of crude policies shoved by the executive see the day. Muturi, a once corrupt magistrate, is behaving and talking like someone who didn’t step into a law school. The sooner we get rid of the lunatic, the better Kenya will be placed until then we’re courting disaster.

Talking of disasters another one in parliament is the leader of Majority Aden Duale who has made a brand of a loose canon, Jubilee’s preferred bark dog given his excellent ability to talk without engaging his senses. Duale is the master of moronic, unintelligent utterances. He even shocks himself on whatever he says. Given the much crap, he talks some unnamed parts of his body must be getting jealous of his mouth. Duale is a preprogrammed bot and a slave to the establishment. As much as we castigate him for unbolted lack of sagacity, we must not forget this is a tragic robot with a developer whom should worry us the most. His owner.

In one of the most disastrous events, Duale reigned a moronic attack on Justice Odunga accusing him of being tribal and issuing opposition friendly judgments. The law and politics are as distinct as Duale and wisdom something he needs to know. Duale and his masters want a manipulation-prone judiciary something Kenya has worked hard to ride over. Duale is threatening to discuss Odunga when parliament reconvenes.

This is a direct attack on the independence of the judiciary and the integrity of the distinguished judge and an abuse of parliamentary privilege. It is conducted entirely untenable in any civilized democracy. Justice Odunga holds an important constitutional office as a judge of the superior court and a member of the judiciary whose independence is protected by Article 160(1) of the Constitution. His exercise of judicial authority is undertaken on behalf of the people of the Republic and therefore cannot and should not be subjected to any impediment of any nature.

With these hired guns seated at the helm of a legislature, Kenya Is cooked and fried waiting to go down the digestive tract. Until wisdom pays them a surprise visit, we must water and soap our hair.

Women and Politics, The Frustrations In Sexist Kenya