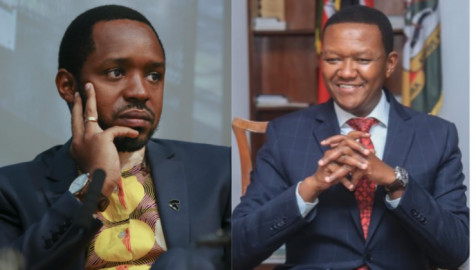 Machakos governor Alfred Mutua has been granted a major reprieve after the high court stopped activist Boniface Mwangi from further defaming him.

High Court judge Margaret Muigai issued the orders in an application filed by the governor.

“An interim injunction is hereby granted restraining Mr Mwangi or his agents, from publishing in any print or electronic media, on any electronic or web-hosted platform, such defamatory material, concerning Governor Mutua,”Justice Muigai ordered.

The judge also certified Governor Mutua’s application as urgent and directed him to serve Mr Mwangi who is expected to respond within two weeks.

This after Governor Mutua through lawyer Harrison Kinyanjui moved to court seeking to bar activist Boniface Mwangi from defaming him further.

The Governor urged the court to issue interim injunction restraining the activist from publishing in any print, electronic media, on any electronic or any web-hosted platform, repeating any publication, innuendos, insinuation, allegations or statement linking him to distraction of his Lukenya house.

So much truth in this court order @DrAlfredMutua. I consider myself gagged but the court order says it all 😃. pic.twitter.com/IsYKJMJxYG

The case will be mentioned on November 4.