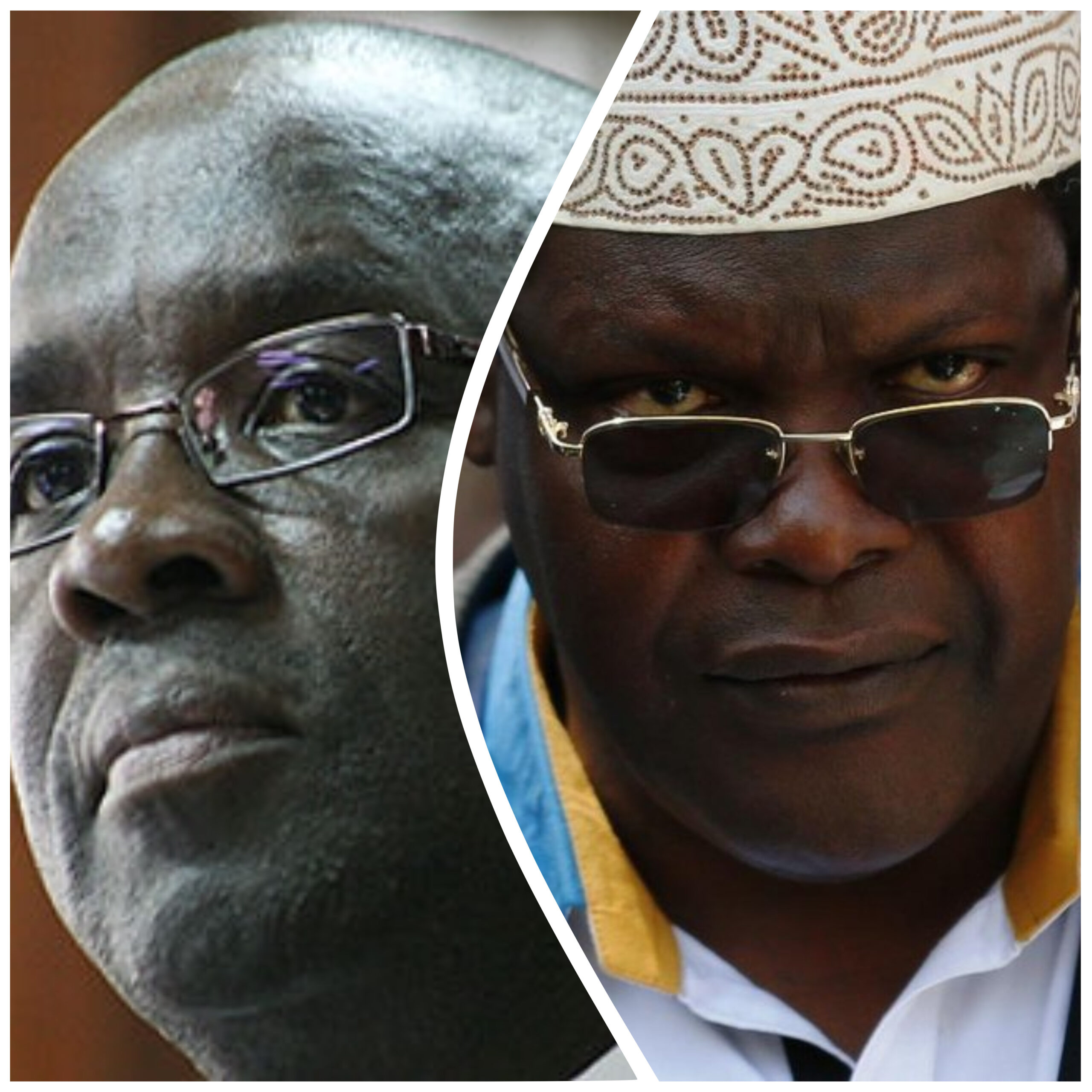 Statement by Dr Willy Mutunga, former Chief Justice and President of the Supreme Court of the Republic of Kenya.

After careful reflection and following broad consultations with lawyers, human rights and justice defenders, progressive politicians, and Mr Miguna himself, I have decided to travel to Toronto, Canada, to accompany Mr Miguna on his flight back to his motherland on 16 November 2021. I am also seeking out Kenyan journalists who will accompany me on this historic journey.

I have taken this extraordinary step for two fundamental reasons. The first is because of the continued, flagrant and reprehensible defiance of the Government of Kenya, its agencies and senior officials, against the numerous valid court orders in favour of Mr Miguna, The second reason why I have decided to undertake this journey is to support and defend the independence of our judiciary, its authority, and the people’s confidence in it.

Roll call of gross injustices, impunity, and subversion of the constitution and the rule of law

As you may recall, Mr Miguna was illegally abducted from his house in Nairobi on 2 February 2018, detained incommunicado and tortured for six days.

Mr Miguna’s house was unlawfully destroyed with detonators. In defiance of habeas corpus orders issued by the Honourable Justice Wakiaga and the Honourable Justice Luka Kimaru directing that Mr Miguna be released immediately and taken to court, the Government of Kenya illegally seized his valid Kenyan passport and forced him into exile in Canada.

On 15 February 2018, Justice Kimaru ordered that Mr Miguna’s Kenyan passport be deposited with the High Court in the state in which it was seized. However, rather than comply, the Government of Kenya defaced and destroyed the passport before delivering it to the court. That was an egregious affront to the rule of law.

The Honourable Justice Chacha Mwita then issued an order on 26 February 2018 directing, among other things, that the Government of Kenya and its senior officials named in the Constitutional Petition Number 51 of 2018 facilitate Mr Miguna’s return to Kenya and grant him unconditional entry at the time of his choosing. The Court also suspended the declarations and decisions of Interior and National Coordination Cabinet Secretary Dr Fred Matiang’i, and Director of Immigration, Major (Rtd.) Gordon Kihalangwa, that had purported to invalidate Mr Miguna’s citizenship and justify his forced exile.

However, when Mr Miguna flew back to the country on 26 March 2018, not only did the Government of Kenya block his entry, but senior government officials also imposed unlawful conditions on him in contempt of Justice Mwita’s orders, physically assaulting him, detaining him for three days in a filthy toilet at the Jomo Kenyatta International Airport, before sedating him and illegally removing him from the jurisdiction of the Kenyan courts to Dubai in the United Arab Emirates (UAE), on 28 March, 2018. Once again, the Government of Kenya did this in open defiance of multiple court orders by the Honourable Justice Roselyne Aburili and the Honourable Justice George Odunga. In a further display of disregard for the rule of law, the illegal removal to the UAE took place on the same day that Justice Odunga issued the order that the Government of Kenya and all its departments and officials release Mr Miguna unconditionally desist from removing him from Kenya.

These illegal actions by the government prompted Justice Odunga to take the unprecedented step of convicting several senior government officials, among them Dr Matiang’i, Major Kihalangwa, Director General of Police, Joseph Boinett, Director of Criminal Investigations, George Kinoti, Officer-in-Charge of the Flying Squad, Said Kiprotich, Officer Commanding Police Station at the Jomo Kenyatta International Airport, and the Attorney General for contempt of court on 29 March. Each of the contemnors was fined KSh200,000, which was to be deducted directly from their April 2018 salaries. To date, none of the contemnors has purged their contempt. They, therefore, continue to undermine the rule of law and to violate the oath of office they took as state officers.

On 14 December 2018, Justice Mwita issued his judgment in favour of Mr Miguna and indicted the Government of Kenya and its senior officials for violating his constitutional and human rights. This was following a hearing of the Constitutional Petition number 51 of 2018. Significantly, Justice Mwita held that Mr Miguna is a Kenyan-born citizen who has never lost his Kenyan citizenship. The court nullified the cancellation of Mr Miguna’s citizenship and passport, and declared that his arrest, detention, torture and removal from Kenya were illegal, unconstitutional and a gross violation of his rights.

Justice Mwita awarded Mr Miguna KSh7 Million in damages and KSh270,000 for the destruction of his house. He also held that Dr Matiang’i, Major Kihalangwa, Mr Boinett, Mr Kinoti, the Officer Commanding Police Station at the Jomo Kenyatta International Airport, Said Kiprotich, and Githu Muigai were not fit to hold public office. Justice Mwita’s orders were against the Government of Kenya and each one of the named government officials.

The Court quashed all the decisions and actions the Government of Kenya had taken against Mr Miguna and directed that the state return Mr Miguna’s valid Kenyan passport and any other identification documents taken from him, and facilitate his unconditional return to Kenya.

The Government of Kenya’s “red alerts” against Mr Miguna were issued illegally and in violation of not just his rights but also of international humanitarian and aviation laws. The issuance of “red alerts” in order to frustrate valid court orders is not only a blatant disregard for the rule of law, but a descent into autocracy.

On 6 January 2020, the Honourable Justice Weldon Korir issued orders directing that Mr Miguna be free to enter and leave Kenya at any time of his choosing using either his national identity card or his Kenyan Passport in the state in which it was submitted to the High Court by the Government of Kenya.

It is now 1,355 days – 3 years, 8 months and 17 days – since Mr Miguna was illegally and brutally forced into exile by the Government of Kenya. None of the court orders referred to above have been obeyed or complied with by the state or its agents and officials.

I urge all Kenyans to demand that the government comply fully with the orders, including the prompt payment of all awards, costs and accruing interest. Justice demands no less.

The repugnant subversion of the rule of law by the Government of Kenya in this case is tantamount to the overthrow of the 2010 Constitution and an egregious act of impunity by a government that has a duty to uphold, comply with and enforce laws and court orders. To blatantly defy them, not once, not twice, but multiple times, sets a dangerous precedent that we all must stand up against.

Court orders are not suggestions. They are not requests. They cannot be disregarded without consequence.

As eminent jurists have noted elsewhere, democracy, the rule of law, and the foundational values of our constitution require that the dignity and authority of the courts be upheld by everyone at all times.

Court decisions and orders are binding for everyone, including the Government of Kenya, all organs of state and all officials. From the homeless, to the military generals to the President of the Republic, no one is above the law.

Writing for the majority in the Constitutional Court of South Africa’s decision of 29 June 2021 on the contempt of court case against former President Jacob Zuma, Acting Deputy Chief Justice Sisi Khampepe observes,

It is indeed the lofty and lonely work of the Judiciary, impervious to public commentary and political rhetoric, to uphold, protect and apply the Constitution and the law at any and all costs. The corollary duty borne by all members of South African society – lawyers, laypeople and politicians alike – is to respect and abide by the law, and court orders issued in terms of it, because unlike other arms of State, courts rely solely on the trust and confidence of the people to carry out their constitutionally-mandated function. The matter before us has arisen because these important duties have been called into question, and the strength of the Judiciary is being tested. . . . It is disappointing, to say the least, that this Court must expend limited time and resources on defending itself against iniquitous attacks. However, we owe our allegiance to the Constitution alone, and accordingly have no choice but to respond as firmly as circumstances warrant when we find our ability to uphold it besieged.

Justice Khampepe goes on to affirm the principles enunciated in section 165 of the Constitution of South Africa as expounded by Nkabinde J in Pheko II, namely,

[t]he rule of law, a foundational value of the Constitution, requires that the dignity and authority of the courts be upheld. This is crucial, as the capacity of the courts to carry out their functions depends upon it. As the Constitution commands, orders and decisions issued by a court bind all persons to whom and organs of State to which they apply, and no person or organ of State may interfere, in any manner, with the functioning of the courts. It follows from this that disobedience towards court orders or decisions risks rendering our courts impotent and judicial authority a mere mockery.

As the South African Constitutional Court did in the case of Jacob Zuma’s contempt of court orders, it is imperative that we all stand up and fearlessly defend the constitution, the rule of law, and the authority of the judiciary. If we do not demand, and ensure, everyone’s compliance with court orders, regardless of their station in life, their power or their wealth, we shall allow the institutionalization of chaos and lawlessness.

I call upon all judges, advocates, human rights and social justice defenders, and, indeed, all citizens of Kenya, to join us as we take a stand against the culture of impunity, lawlessness and barbarism that is slowly creeping upon us.

As I prepare to embark on this journey, I demand that the Government of Kenya:

The immediate purging of contempt of court orders and full compliance with all the foregoing decisions will enable Kenya and its government to be readmitted into the community of civilized nations.

Finally, I appeal to all Kenyans of goodwill and to our friends in other countries to support this cause because it is just. I will communicate the day of my departure and my itinerary in order to enable those who cannot accompany us physically to do so virtually.

Kenya Insights allows guest blogging, if you want to be published on Kenya’s most authoritative and accurate blog, have an expose, news TIPS, story angles, human interest stories, drop us an email on [email protected] or via Telegram
Related Topics:Miguna MigunaWilly Mutunga
Up Next

All Bars To Close At 7PM Despite Curfew Lifting, Police Clarifies