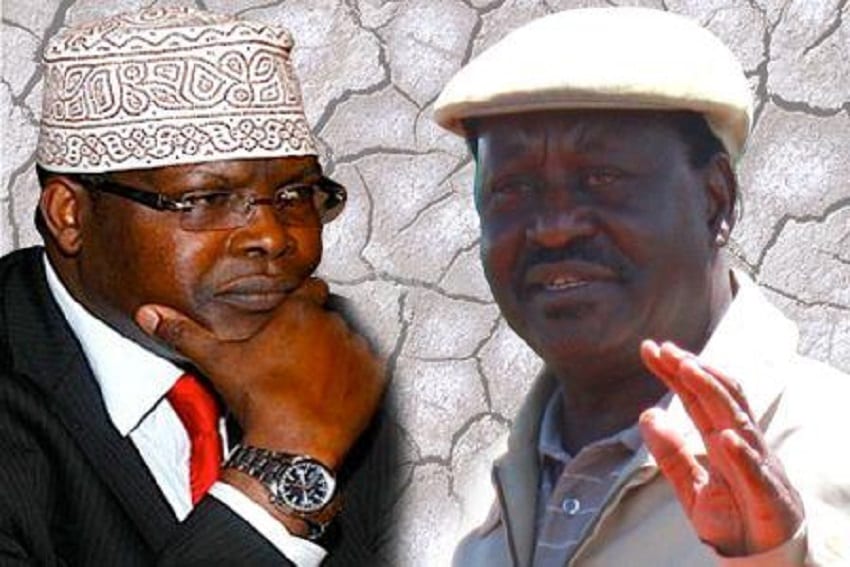 Self declared General Miguna Miguna yester evening  breathed fire, this like most of the time, through his official Twitter account. Former senior personal advisor to the former premier Raila Odinga, General Miguna has claimed that the late Fidel, Winnie And Junior Odinga are not Raila’s biological children.

Fidel Odinga was the BIOLOGICAL SON of the late DAN OWINO. Raila married Ida when she was pregnant with Fidel. That is why Fidel's house was built outside Raila's Bondo home. And the reason he was NOT buried beside his own house or inside Raila's homestead. TRUTH SETS US FREE!

Miguna, who was ejected from Kenya after  swearing in Raila Odinga as the people’s president on the 30th Of January 2018, was responding to media reports of Raila’s family inheritance tussle.

According to Mama Ida, Lwam Bekele, the widow to Fidel, masterminded the death of his son. In statements to detectives captured in court documents, Ida says Lwam was behind the mysterious demise of Fidel, their firstborn who Miguna Miguna now claims otherwise, in January 2015.

Raila’s family became apprehensive when Lwam was granted the letter of administration of the Fidel Castro Odhiambo Odinga’s estate, which is speculated to be worth billions.

This prompted Ida and her daughter, Winnie, to file an objection to that, arguing that Lwam is a suspect in the death. They claim she vanished soon after Fidel was buried and investigations into the death were launched, then cut off communications.

On her defense on the case, Lwam, states that Ida has been making false and unkind remarks about her in connection to the sudden death of her husband.

This explains why The Con-Man @RailaOdinga does not care about Fide's widow Lwam Getachew Bekele or Fidel's son. Kenyans must say NO to Raila's conmanship both in his personal life and his fraudulent politics. We cannot allow one man's turbulent life to destroy that of millions.

However, Raila Odinga still enjoys the fact that he’s a political darling to many he didn’t have to bother and reply to Miguna Miguna. Kenyans on Twitter, who are loyal fans of RAO and others elected ODM leaders took to their accounts and savagely threw The Kenyan  Revolutionary Federation General in RAO’s ‘boiler’.

Here are sampled tweets reaction to what Miguna Miguna had alleged.

Miguna Miguna, who suffers from delusional disorder ought to know that his manic abuses of Raila Odinga everyday only excites TangaTanga members .. Miguna who was nothing was given helping hand by Baba & when his employment ended, went back to nothing … Bure kabisa wazimu!

Miguna doesn’t have a job, his daughter works as an escort in Canada to feed the family. Comes to open his bald head here on Twitter insulting hardworking men. pic.twitter.com/YkQOoZL86t

At least Raila took care of baby that wasn't his, if what you're saying is true. Some people(YOU) can't even take of their own kids. Do you even know where Atieno Miguna alias Tiana is? or what she sells to earn a living #miakhalifaAtieno

Family is every man's heart. ANYTHING that threatens another man's family is every man's enemy. Miguna's attacks on the family of Rt Hon Raila is unwarranted, immature, uncouth and shocking! A man with his own children should know better. Nothing justifies this kind of behavior.

Miguna is a fool,there are lows that you should never fall below,that was the lowest he could go

And there are people ululating whenever Miguna attacks the family of Raila,we all have issues and Raila is human too
This fool of a general is too much!

Miguna Miguna is just a Mike Sonko with a Canadian citizenship. There's no person there.

Nothing is as low as attacking someone’s family and children. Nothing.

Reprehensible is an understatement!

Miguna Miguna is trash.Going for Raila who made him to be what he is, more so his family is the new low.Seems he is officially hired to propagate Cambridge analytica strategy of character assassination by TangaTanga. How thing turned to be about Raila and not despots speaks vol.

Related Content:  Dear Mr President, It's Nothing Personal, We're Taking Back Our Country From Wolves of Jubilee
Kenya Insights allows guest blogging, if you want to be published on Kenya’s most authoritative and accurate blog, have an expose, news TIPS, story angles, human interest stories, drop us an email on [email protected] or via Telegram
Related Topics:FamilyFidel OdingaLwam BekeleMiguna MigunaRaila JuniorRaila OdingaWinnie Odinga
Up Next