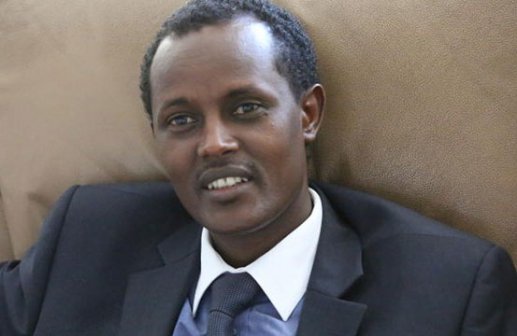 After weeks of dodging and playing hide and seek with the National Assembly’s Public Investments Committee (PIC), former Ethics and Anti-Corruption Commission (EACC) boss Halakhe Waqo on Friday finally showed up for the grilling by the committee having been summoned following revelations by Ms Zubeda Nyamlondo, a director of Aszure Commercial Services a company implicated in a Sh347M scandalous tender to supply facemasks to the Kenya Medical Supplies Authority (Kemsa).

Nyamlondo who was casually dressed in a jungle green dress, a red marvin hat and a matching face mask when she appeared before the Public Investment Committee (PIC) took the committee in circles, at times contradicting herself and prompting members of the watchdog to conclude she could be a proxy to some powerful individuals.

PIC Chairperson who is also Mvita MP, Abdulswamad Nassir, could not fathom how in less than two weeks, Nyamlondo was able to sign a contract worth KSh348 million.

Waqo’s name popped up following a sustained probing by the committee members for the witness to provide details of ownership and how the firm sourced for funds to finance such large contract having only done business worth Sh8 million in the previous years.

Ms Zubeda told the committee when she appeared last month that Waqo was a signatory to a loan that facilitated the supplies to Kemsa. 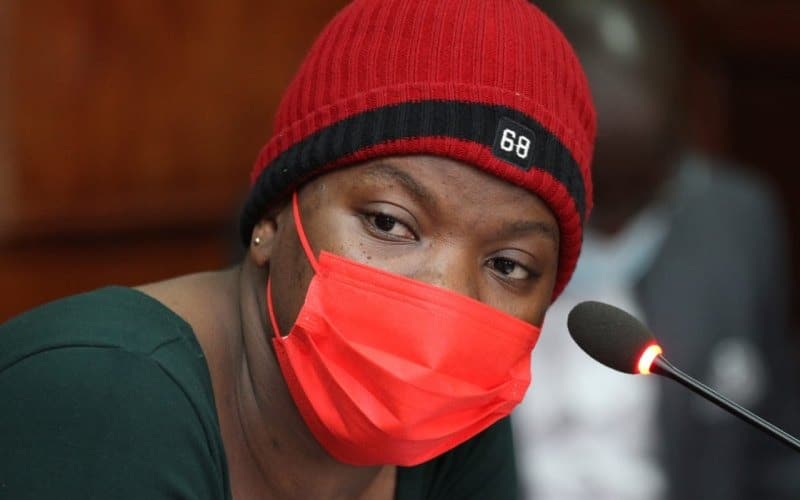 Asked if she was the only signatory to the company accounts, Ms Nyamulendo said a colleague only identified as Stanley, was a signatory.

Ms Nyamulendo further stunned the committee when she could not recall Stanley’s surname. Stanley Kithia, Dorothy Omogi and a Phanice Adhigo were the shareholders when the company was founded back in 2017.

Kaloleni MP Paul Katana wondered how she bagged the tender and received a commitment letter only four days after walking into the offices.

Katana noted that the company could have been used by influential persons and she was only a pawn.

“You can’t walk to an office and simply get a commitment letter to supply Sh347 million worth of goods without any previous supplies,” the MP said.

It would later emerge that former EACC CEO Halakhe Waqo signed the firm’s surety for a loan from First Community Bank.

It was Waqo that helped unlock funding for the local purchase order (LPO) for the company prequalified as a supplier of office furniture, fittings, and other assorted equipment.

“The bank needed security to give us the huge amount of money we requested. Waqo gave us the assurance and we included him as a director,” she said.

“The bank needed security or assurance. Waqo came on board as a surety and I wrote a letter introducing him as a signatory. The letter was to provide for three people to sign the loan,” Nyamulendo said.

Ms Nyamlondo told MPs that Mr Waqo was a friend that helped the company secure a loan when it could not raise Sh347 million to supply KN95 masks. The company got a tender to supply 50,000 boxes of KN95 each at Sh690.

The company got a Sh176 million loan from the bank and another loan for Sh171 million after Kemsa paid for the first LPO in three weeks.

This was despite Nyamulendo not delivering the assigned stocks on time.

The directorship of the company has however changed and have now only Phanice Adhigo Onsiti and Zubeida Nyamolondo as its directors.

Unconvinced that Waqo was merely a loan signatory, the committee summoned Mr Waqo to establish whether he is the faceless owner of Aszure Commercial Services and only fronted Ms Nyamlondo to hoodwink the public.

The lawmakers also wanted to establish why the company, which had an account at Kenya Commercial Bank, decided to go to First Community Bank(FCB) for a loan.

After taking his time, his answers during the grilling painted a clearer picture of a larger conspiracy that did not only involve proxy managers but included bank officials from FCB and put Waqo right in the middle as the major stakeholder.

Waqo confirmed Zubeida’s account that he was the loan guarantor for their firm.

The former EACC chief executive, who appeared before PIC after twice failing to honour its invites, however, however denied direct links to the firm.

And this is where it gets suspicious and puzzling, Waqo told the parliamentary committee that he had been approached by a manager at First Community Bank (FCB) where he and directors of the firm are customers whether he could provide security to a loan Aszure Commercial Services had sought to finance the Kemsa deal.

MPs were puzzled as to the nature of relationship that Waqo holds with the bank that the manager had the confidence to approach him as a guarantor and more so what was the bank’s interest in sourcing for a guarantor for a customer. In a normal setting, the customer approaches the bank for a loan with a guarantor in hand. The complex relationship between the bank, Waqo and the firm left more questions than answer as to the bigger common interest of all the three parties.

Related Content:  Kenya's Olympics Manager Asked For Sh.1.3M To Protect Doping Athletes, Here's The Other Side Of The Story

In documents submitted to the committee, Waqo testified to have provided title deeds to the bank as security for the loan granted to Aszure Commercial Services.

The money, he further divulged, had been paid directly to suppliers, with a company with links to Chinese nationals, which has been adversely mentioned throughout the probe, said to have taken the largest share of the Sh179 million.

Prior to facilitating the deal, Waqo was made a bank signatory of the firm owing to his investment according to documents seen by Kenya Insights. He told the committee that he ended his engagement with the company once the Kemsa deal was finalised and the loan repaid. The signatories to the deal also got back their securities.

Members of PIC had questioned Waqo’s involvement in the company, given that it had depended on him, almost entirely, to guarantee a Sh179 million loan from the bank.

“I am not a shareholder, proprietor or a director of the company. The directors of that company approached me after the bank introduced them to me. I was just a guarantor and an observing signatory,” said Waqo.

“I have no contractual obligation to Kemsa. I was just an agent of funding to the entity. All my engagements with it were through the bank. I relied on communication between the bank and the company,” he said.

Aszure Commercial Services had written to the FCB seeking a loan after securing a commitment letter from Kemsa to supply 500,000 KN95 masks.

MPs question that wasn’t answered was why Aszure didn’t seek a loan from KCB where the firm hold its accounts and instead went for FCB. It is unconvincing that Waqo would fund a project for people whom he doesn’t know only relying on the bank’s managers word which also leaves a lot to speculate about their depth of relationship. One can certainly tell who the faceless owner of Aszure Commercial Services is.

FCB is associated with Senior Counsel Ahmednasir Abdulahi and others claim that Waqo too holds stakes in the bank. 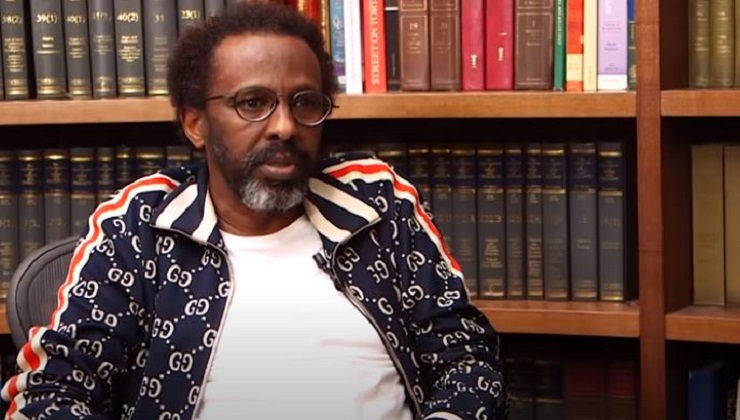 Waqo is not new to accusations of fraud, during his less colorful tenure in the EACC, the commission was described as useless and at one point MPs wanted it disbanded given how toothless it was when the country was losing billions to corrupt deals.

In 2014, EACC put the president in an embarrassing situation when it handed him a list of alleged thieves which he presented to parliament during his state of the nation address.

Most of those mentioned were never prosecuted due to lack of evidence.

At one time an infuriated Uhuru on learning the wild goose chase that the commission had sent him on publicly dressed down Waqo at a State House function.

Waqo was severally mentioned by bloggers as a very corrupt guy who doesn’t hesitate to take kickbacks to go slow on investigations. His hate to questioning bloggers would see him having Robert Alai charged for questioning his academic credentials.

The bribe was allegedly received to cover the names of several governors and a Cabinet Secretary listed in the graft.

According to Adan Guracha, the then EACC lead detective in the scandal, Waqo used the proceeds to build a six-storey building in Isiolo town.

In a sworn affidavit, Guracha also revealed how Mr Waqo ordered him to discontinue investigations into the fraudulent compensation of the Lamu Coal-fired Power Generation project in 2017.

“When he tabled information linking Dido and Sons limited to the fraudulent pay of over Ksh100 million, Waqo intimidated him and directed him to handle other cases,” the affidavit read.

While Waqo’s path with scandals remain in plain sight, he was appointed Chairperson of the Universities Fund Board on his exit from the anti graft commission which came in the heights of many having lost confidence in the commission.

A report by the Auditor General Nancy Gathungu in 2020 touching on the procurement scandal at KEMSA revealed that KSh2.3 billion was lost in procuring Covid-19 medical supplies.

The damning report revealed that billions of shillings were unaccounted for and that there was no budgetary approval by relevant authorities.

Investigations into the loss of billions of shillings for purchasing Covid-19 kits at the Kemsa would reveal how powerful faceless people called the shots. Appearing before PIC, a Kemsa a suspended official invoked the name of highly placed people in government who influenced the tenders.

They reckon that the unnamed people issued death threats to the Kemsa top executives if tenders for Covid kits were not issued to their preferred firms.

Suspended Kemsa procurement manager, Charles Juma told MPs that the former CEO Jonah Manjari was under pressure from people whom he only termed as “highly placed and influential” persons in government who insisted that certain companies must be awarded tenders even if they were not prequalified.

He told the National Assembly Public Investments Committee that the suspended CEO was a man under pressure and at one time confessed to him that there were highly placed people who had warned him against going according to their wish.

“The CEO told me that he has attended high level meetings with influential people who threatened him that if he does not act according to their wish…he would disappear,” Mr Juma told the committee.