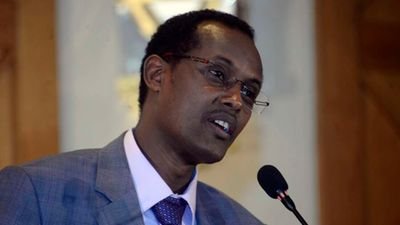 Former anti-graft agency boss Halakhe Waqo has been summoned by Parliament to explain his links with a company that was awarded a Sh347 million State contract for Covid-19 emergency equipment despite its limited financial capacity and no experience in medical supply.

Mr Wago, formerly the chief executive of the Ethics and Anti-Corruption Commission (EACC), stood as guarantor for Assure Commercial Services Limited in the deal which involved the supply of face masks to the State-run Kenya Medical Supplies Agency (Kemsa).

He assisted the firm to secure funds from First Community Bank to finance a local purchase order (LPO) for the supply of 50,000 boxes of face masks, each containing 10 packs of KN-95 respiratory protectors that were each sold to Kemsa at Sh690.

Though Mr Waqo is not listed as a director or shareholder of Assure Commercial Services, he was a signatory of the firm’s Kemsa transaction account at First Community Bank.

The National Assembly’s Public Investments Committee (PIC) now wants the former EACC boss to explain his links with the company as well his role in helping it to secure funding from First Community Bank instead of its regular banker, KCB Bank.

“We want Mr Waqo summoned to appear before this committee. We want to know how he was a signatory to an account of a company that he is not a shareholder,” Paul Katana, the MP for Kaloleni, said.

Related Content:  UK Has Approved The Extradition Of Sh7.6B Triton Scandal Mastermind Devani Back To Kenya

PIC chairman Abdulswamad Nassir said Mr Waqo and the firm’s current and past directors would be summoned to shed light on the Kemsa transaction.

“Your company was used by some influential people to get this procurement. You can’t walk to Kemsa, get a commitment letter to supply goods worth Sh347 million when you had not supplied any product to government,” Mr Nassir told Ms Ngobi when she appeared before the committee.

Ms Ngobi told the MPs that Assure Commercial Services was prequalified by Kemsa as a supplier of furniture and fittings and not pharmaceutical products.

Ms Ngobi said the company saw an opportunity to supply Covid-19-related items to Kemsa after Health Cabinet Secretary Mutahi Kagwe announced that the country had a shortage of personal protection equipment (PPEs).

“I simply walked into the Kenya Medical Supplies Authority (Kemsa) and went to procurement office and told them I could supply KN-95 masks. I went and saw Mr Charles Juma, the head of procurement… Mr Juma asked me if I am able to supply and I said yes. He then asked me to bring a sample,” she said.

Ms Ngobi said she returned to Kemsa the following day with a sample and quoted the price, which Kemsa agreed to.

“I said I could supply 50,000 boxes in packs of 10 at a cost of Sh690 for one KN 95 mask. After four days, they gave us a commitment letter to supply masks worth Sh347 million because it was an emergency procurement and they needed it with emergency,” she said.

Related Content:  How Transnational Cartels Dictates What You Take For Breakfast In Kenya

Kemsa used the reverse procurement method during Covid-19 emergency where suppliers were asked to put in a letter of intent quoting amount of items and their prices before they were issued with letters of commitment upon negotiations. Contracts would then be signed after delivery of items.

Assure Commercial Services was, however, not subjected to the treatment as the firm didn’t put in any paperwork before bagging the Sh347 million tender.

Ms Ngobi said Kemsa paid her firm Sh176 million for the first batch of masks and a further Sh171 million in May, a month after securing the contract.