As 2022 general elections draw closer, aspirants continue to announce their candidatures from left, right and centre to capture the Nairobi top seat that fell vacant after Governor Mike Sonko was impeached in  December.

The latest entrant in the Nairobi race is Isaac Njuguna who is establishing a campaign secretariat to win the seat that has attracted a number of politicians including former Starehe Mp Bishop Margaret Wanjiru who enjoys the backing of DP William Ruto and Sonko.

Njuguna was Sonko’s strategists and financiers during the 2017 elections where he spent millions of shillings in Sonko campaigns as he was also the brains behind Sonko Rescue Team that penetrated Nairobi’s informal settlements to hunt votes for the former governor.

The little known kingmaker began setting his political machinery and resources in motion the moment Sonko was impeached and a by-election declared. He initially intended to run on the Roots Party of Kenya as his party but details remain scanty if he will still use the said party.

Roots party belongs to lawyer George Wajackoyah who unsuccessfully vied for presidency in 2017. 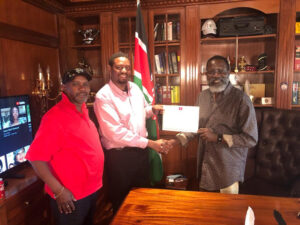 The alumni of University of Nairobi, Strathmore University and City University in London is a businessman who showed interest in the by-election where Jubilee Party had cleared the former Dagoretti South MP Dennis Waweru and Agnes Kagure to battle for party ticket before the courts halted everything.

Njuguna wants to capture the youthful vote bloc as he pushes to bring the social change the city residents are yearning for but his recycled opponents have failed to achieve.

Related Content:  Kalonzo, Kibwana to face off in village politics

But with the chances dashing on a possible by-elections due to the pending suit, all eyes are now set on 2022 when the country will general elections to elect new leaders.

Kenya Insights allows guest blogging, if you want to be published on Kenya’s most authoritative and accurate blog, have an expose, news TIPS, story angles, human interest stories, drop us an email on [email protected] or via Telegram
Related Topics:Isaac NjugunaMike SonkoNairobi governorship
Up Next