Mobile Lenders in Kenya are really the bottom of the barrel, initially, the field remained unregulated and attracted many crooks who banked their hopes on the desperate and uninformed citizens to not only give loans at exorbitant interest rates but also invaded their privacy.

Okash, Opesa both of which we’ve gathered are owned by Chinese nationals have been a Centre if bad press and they have themselves to blame. We’re going to come back to this later on.

Kenya Insights has obtained communications between the company’s directors and their debt collectors showing a total disconnect and a rogue employer.

The firm has about 600 agents most are now working from home after police raided their offices for working despite government’s directive of working from home. Now, the workers are being asked to work for almost 12 hours a day as credit collectors and are under constant threats. They work 6 days a week. “We’re really suffering from these Chinese but we’re desperate as we have no other jobs and they’re taking advantage of this to harass us, please help.” One of the workers talking to this writer said.

In their contract they signed with the company that we’ve seen, they should be working from 8am to 5 pm which is 8 hours a day and lunch break of one hour, now they’re forced to work for the 12 hours a day with a 30 minutes lunch break and are constantly under threats. We also gather that a Chinese only identified as Yu is on the frontline and often call the agents directly and he doesn’t have nice words. 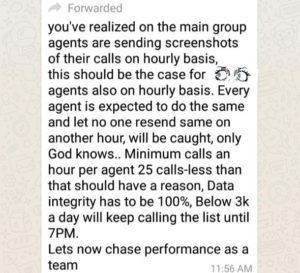 They’ve obviously contravened the terms of the contract and abusing their power on helpless Kenyans. As they sit comfortably in Beijing, they’re making life more unbearable for Kenyans who now have to deal with Wuhan virus and rogue employers.

One of the least-acknowledged and perhaps most insidious aspects of digital credit is the way it is expanding the reach of governments and corporations into people’s everyday lives. Financial technology, or fintech, is commodifying the routine habits of Kenyans, transforming their behavior into reputational data to be monitored and assessed.

Then there is the issue of data capture. Safaricom is not only dominating Kenya’s once cash-based, “informal” economy through services like M-Pesa; it is also collecting a great deal of data on customers and their consumer habits through their phones. According to the watchdog group Privacy International, mandatory SIM card registration laws have enabled “a more pervasive system of mass surveillance” throughout Africa.

Fintech companies have gained unprecedented access into the lives of ordinary Kenyans. They use everything from GPS data to how often people call their parents to social media feeds to assess customers’ creditworthiness. As Sofia Zab, former Director of Marketing at Branch, told Kenya’s Standard Media: “We use smartphone data to build a financial identity for applicants. Our machine learning algorithms analyze over 2000 data points to make lending decisions. This includes M-Pesa transaction SMS, call behavior and handset information.” Credit analytics firms like the American startup Cignifi are also culling data from unbanked African populations to develop predictive algorithms.

The accumulation of digital credit histories is particularly worrisome in a country that lacks sufficient data protection laws. Many apps have terms of service (like Tala’s privacy policy) that reserve the right to disclose users’ information to third parties.

Last year, a particularly brazen privacy violation occurred when late-paying users of the loan app Okash discovered the company was texting friends and relatives requesting that they “kindly inform” debtors of their loan obligations. As one Twitter user complained, “Okash does not value privacy. If you default [on] your payment by 3 days, they hack your personal contacts and start calling people…They be calling your dad, mum, sister, friends, your ex, landlord…seriously.”

Okash have zero regards for privacy and they continue to operate despite all the cries. Only recently, The CBK announced new regulations concerning information submitted to Credit Reference Bureaus (CRBs) in what has been hailed by Kenyans as one of the wisest moves from the regulator.

Talking of exploitation, the company is notorious. When asked to share their experiences, it was nothing but chaotic, stinking to the high level.

The Government MUST investigate OKASH/OPESA. We can't have apps like these which exploit Kenyans and mine their data unknowingly. These folks are Notorious!

They "read" your messages and monitor your MPESA and Banks transactions, they also need to know your location, to monitor your often movements to those expensive joints or the malls to do shopping.
They also want to know who is in your contact list, whether in hustlers ama wazito

In Kenya, the impact of technology has affected the market economy greatly. The rate at which innovations relating to the use of technology to enable access to finances is rising remains unparalleled. In 2007, Vodafone, through Safaricom, launched MPESA mobile money transfer. The obvious gap that Vodafone sought to fill was that of financial access and inclusion, especially amongst low and middle income earners. MPESA has since metamorphosed into several other services. Kenya is currently facing an influx of lending platforms. It is therefore important to conduct an audit of the legal framework governing this sector to determine its efficiency in the dynamic market economy.

One emerging concern related to digital lending is harassment of borrowers upon default of payment of the loans from lending applications. The Central Bank of Kenya (“CBK”), established under the Central Bank of Kenya Act, (“CBK Act”), is the lead regulator in the financial sector. However, the texture and architecture of the CBK Act anticipated regulation of operations typical financial institutions such as banks.

The provisions of the National Payment Systems Act could be utilised by the CBK, for reason that these digital lending apps operate within its framework. Since 2018, the CBK has hinted at a digital lending charter to regulate digital lending. The charter should contain clauses that will tame lenders from harassing borrowers. To also address concerns of extortion and hidden unconscionable profits on the part of digital lenders, there is need for a provision requiring borrowers to be supplied content on financial literacy. This will help inculcate policies on transparency and disclosure in this sector.

One other concern that must be addressed in this sector is that of infringement of privacy, seeing as borrowers and their acquaintances have their privacy violated in several ways. Privacy includes treating all borrowers with the utmost respect and dignity as they use the digital lending applications.

In the current market practice, upon default of loan repayment, some random persons in the contact list of the borrower are contacted in the guise of enforcing repayment. This is used as a form of default guarantor to the digital loan. In reality, contacting random persons about a loan taken by another without their knowledge subjects the borrower to shame and unintended disrepute. In Indonesia, digital loan applications have been reported to form WhatsApp groups using the contact details of the borrower and an automatic message sent to the chat asking the members to tell the defaulted borrower to repay the loans.

Therefore, at the point of installation of the digital lending applications, there is need to ensure that the consent pop up notices give the borrowers options as to the levels of access that they consent to. It is also significant to ensure that failure to consent to use of data does not deny borrowers a chance to utilise the credit facility as this amounts to coerced or constructive consent.

There is also need to disclose the data obtained and the purpose of obtaining such data. During use of the digital lending application, when personal information changes, the digital lending applications need to put in place measures to facilitate rectification of such information. Additional data sought from the data subject, should be done properly, following strict guidelines as to consent.

It’s unlikely that these people will change their rogue ways of operations so it’s either Kenyans stay away from them or the government bundle them out and save the many at their mercies. But there’s a drop of some hope, Central Bank Governor Patrick Njoroge has intensified attacks against digital lenders, dismissing their role in the credit market, which he mockingly likened to a “flea in the economy.”