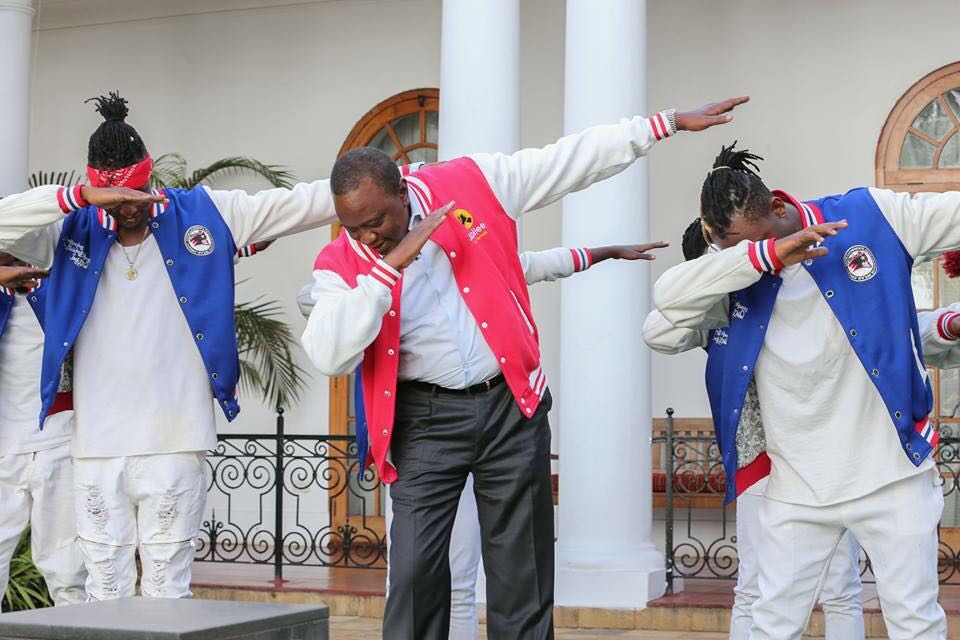 What was meant to be a cool President stunt turned into the worst nightmare for the Statehouse operatives? Uhuru posted photos of him pulling the infamous dab dancing style. In the past, the internet would go aww with praises on how cool he was but not this time. While the stunt was innocent, Uhuru and Statehouse operatives forgot to read the mood of the country. Kenya is, and a hungry and angry state anything quickly provokes them. Only a few days back First Lady was forced to call off Beyond Zero Marathon following a similar backlash.

Using #DabOfShame Kenyans laid open their frustrations taking advantage of The miscalculationsby the Statehouse to tell the world on their dissatisfaction on the Jubilee administration. The pictures drew all memes and painted reality pictures.

Once you make it top leadership, it takes a lot to stay there and remain relevant. Jubilee won the 2013 poll beating the opposition Cord through a twisted ICC narrative around ‘tyranny of numbers’ myth. The president and his deputy William Ruto were facing charges over 2007/8 post poll chaos.

They got to the office distracted by several court appearances abroad, but later they walked out free in mysterious ways. Other than the projects that were initiated by the previous grand coalition government, Jubilee has had nothing of substance to write home other than lame and helpless PR stunts.

With the elections fast approaching the government is now on ‘a launch everything spree’ from foot bridge, village path to any public toilet. That is not enough, the ongoing mass voter registration that has been turned into an unofficial campaign by players from both political divides has its share too. The government having the upper hand and power is doing the worst stunts within the window just to woo Kenyans from their strongholds or tribal linings to register and vote.

Related Content:  The Deceit In Numbers On The Presidential Election In Kenya

Right now half of Kenyan counties are facing a severe drought. The government is doing nothing substantial to help the affected families. Instead, they are focussing on small time campaigns. Kenyans facing starvation and dying in northern Kenya can just die if anything they won’t be there to vote for the government in August polls. Not that the government wasn’t aware of the times ahead.

Findings of the 2015 Long Rains Assessment (LRA) revealed that nearly 1.1 million people were acutely food insecure and could not meet their basic dietary needs. They required assistance for at least six months. September 2015 to February 2016, and late last year, government findings indicated that food insecurity had more than doubled from 600,000 (Aug 2015 – March 2016) to 1.25 million (August 2016 – February 2017).

Now when it’s common knowledge that short rained began late and performed way below par, the government is doing nothing serious to help families in affected areas. It’s politics 24/7, and any slight break is turned into a PR exercise. The president was busy ‘dabbing’ while encouraging the youths to vote; some public money would be wasted to buy out the entertainers who were present at the state house.

People are only viewed as votes, less fortunate matter the least because the situations they are facing may result in their demise before 2017 polls. Wastage in government has become the norm. If the same energy and resources being used to rally Kenyans to register as voters would be utilized in fighting corruption or creating employment Kenya would be a better place.
If the same energy and over a billion shillings that were used to campaign for Foreign Affairs Amina for top AU leadership were used to feed families facing drought, many lives would have saved.

Related Content:  Why Is Everyone Getting Paycuts Except Politicians?

The amount being wasted on 36 insignificant bloggers who do nothing but retweet or like any post by Denis Itumbi or respond to the opposition can be used on life changing projects. Instead, a selected few are chosen to enjoy the national cake, eat meat while others die to struggle to even catch the ‘scent.’ Uhuru may be a cool president but for what use if he does not the real job done?

It’s About Time, From Trump To Africa