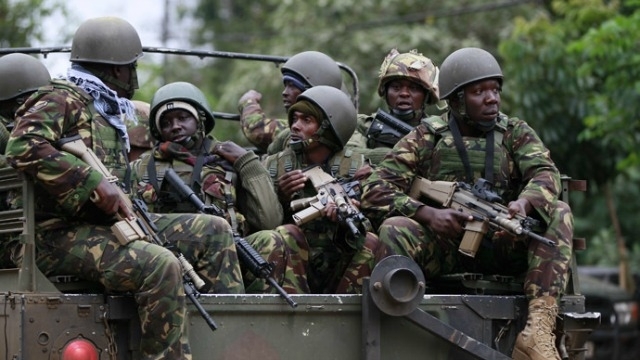 Uncomfortable, an unusual discussion has been going on at the heights of this hotly contested election; involvement of the army in the election. The opposition NASA has consistently insisted that the regime is determined a d planning to use the military in rigging the August 8th poll. They went as far as leaking a military plan document which was confirmed by the army spokesman Col. Joseph Owuoth but in an abrupt turn, Department of Defence scraped the document as a fake.

There have been rumors of possible divisions in the army more specifically on the political perspective. Tribalism in Kenya is a killer disease, in the security plan document leaked by NASA, it was not shocking that tribe and regime friendliness was a cut off line in the choice of soldiers to be used in the exercise. The leaking of military information on involvement in the election has been read as a possible division in the hierarchy with the disgruntled leaking information to the opposition. However, this is debatable as there are also possibilities of deliberate leaks by owners.

Being an apolitical outfit, it is mere speculation to tell the affiliation and really unnecessary but nature of politics pushes us. In Gambia recently, the army turned against the incumbent Jammeh, they joined public in his ouster. The unpredictability of The Army’s perhaps what gets it going. Kenya has a respected force regionally and it would be disappointing to see them taking individual rights ahead of the public whom they have obligation to protect.

During the presidential debate that President Uhuru boycotted, Raila touched on a sensitive issue that gave hope to junior officers in the army. Raila said removing Kenyan soldiers from Somalia is a priority should ascend to office. If there’s any clear division in the army then it must be in the stay in Somalia. Junior officers are reportedly suffering the year at the expense of a few senior individuals who gain in illicit trade. Charcoal, sugar smuggling are illegal businesses senior officers are engaged in as reported widely in several reports. Given accountability shield put on the army, questions are never asked and those who dare dig deeper risks being enemies of the state. The soldiers would rather come back home and protect the border but would the seniors allow that?

One of the questions that probably would’ve kept President Uhuru from attending the debate is the El Adde run down by the Al Shabaab. Up to date, the government has never given exact numbers of soldiers killed leave alone the secretive and unceremoniously conducted burial of the killed soldiers. This is a question of posed, the president would’ve swallowed his tongue. Such occasions naturally demoralize the soldiers who put their lives in line only to be subjected to alike treatment in their death.

Several complaints have also been flying around on the standards of the military equipment more particularly the recently blowing up APCs, no detectors to avoid being hit by landmines. While Kenya bought new warfare from the states, KDF still relies on US drones to launch attacks. Even with the promise of modernizing the military, missing a drone is a shame. These soldiers need state of the art equipment and better working conditions including moralizing pay pack. Talking of better pay, the soldiers had been promised an increase but things seemed to have taken on gold water following the consistent attack on the army and leaking of information by NASA.

The military has confirmed precautionary measures in their plans for security during the election and it is no longer a secret that officers drawn from different camps getting training on how to handle the election. It puzzles why special forces would be pulled from places like Boni forest in Lamu where Al Shabaab is causing mayhem for the election training.

Why The Government Raided And Deported NASA’s Foreign Campaign Strategists

Wafula Chebukati The Man With The Worst Job In Kenya