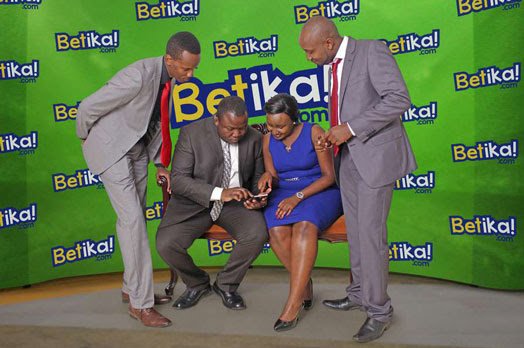 Interior CS recently cracked his whip on betting firms in Kenya many of which he alleged were operating illegally and engaging in fraud. Following this, 27 betting firms had their licenses suspended after auditing.

Giants like Sportpesa and Betin had theirs suspended and are struggling to come back to trade having their pay bills canceled by government.

Betika, one of the leading firms was lucky enough to have their license renewed. However, the firm is now coming under harsh attack from users following claims that they’re canceling successful bets.

Betika I hear cancel successful bets lips and if you win a number of times they also cancel.

Betika immediately came out to refute the claims, “Hi,kindly note that Betika is not involved in such.We only rely on results.Thus, we don’t engage in the above mentioned vice. We are extremely professional and ethical in our dealings with our valued customer.” They wrote in response to Muthui’s accusation.

Sam Macoha wrote in rebuttal to the Betika’s response, “You are denying a thing that you have done to me and I have shared the details and you have acknowledged the error if its truely an error. I only want one thing …..Reimburse the cash(14k) to me and there will be Peace  and your above statement will be of meaningfulness.”

When contacted by this writer, Sam said the matter was being handled by the customer service who acknowledged his claims.

Despite having denied the accusations onset, Betika seemed to have had a change of mind by admitting to canceling the bets, “We sincerely apologies for that, we had a technical issue that led to cancellation of some bets,but this was resolved and all bets paid in full. If you have any BET ID that still has an issue,kindly DM it to us and we will follow-up on it.” They wrote in a response.

More complaints were however raised like with Antony Koome, “Very true they have cancelled 3 of my bets,at first I had thought it’s me who is not following keenly.” Another user Davis Chirchir complained, “Yes they Do. I’m victim of such cancellation.” 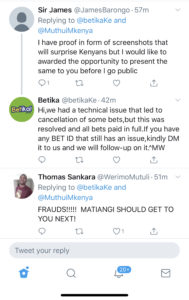 However, another user Sam Ndiri, disagreed with the majority saying his relationship with the firm has been smooth, “I have played on Betika since March 2019 and I’m yet to experience such a thing.”

The fraud claims raised by users is only a matter that the Betting Board can investigate and ascertain but the number of complaints raises an alarm and a need for immediate action and also for the firm to come out clean and assure its customers. Such claims shouldn’t pass the scope of the interior CS Matiang’i.

Babu Owino: Ruto Should Resign And Must Be Arrested

Dr. Gitahi: Brace Yourselves, It Could Take Upto 18 Months For Kenya To Recover From Coronavirus