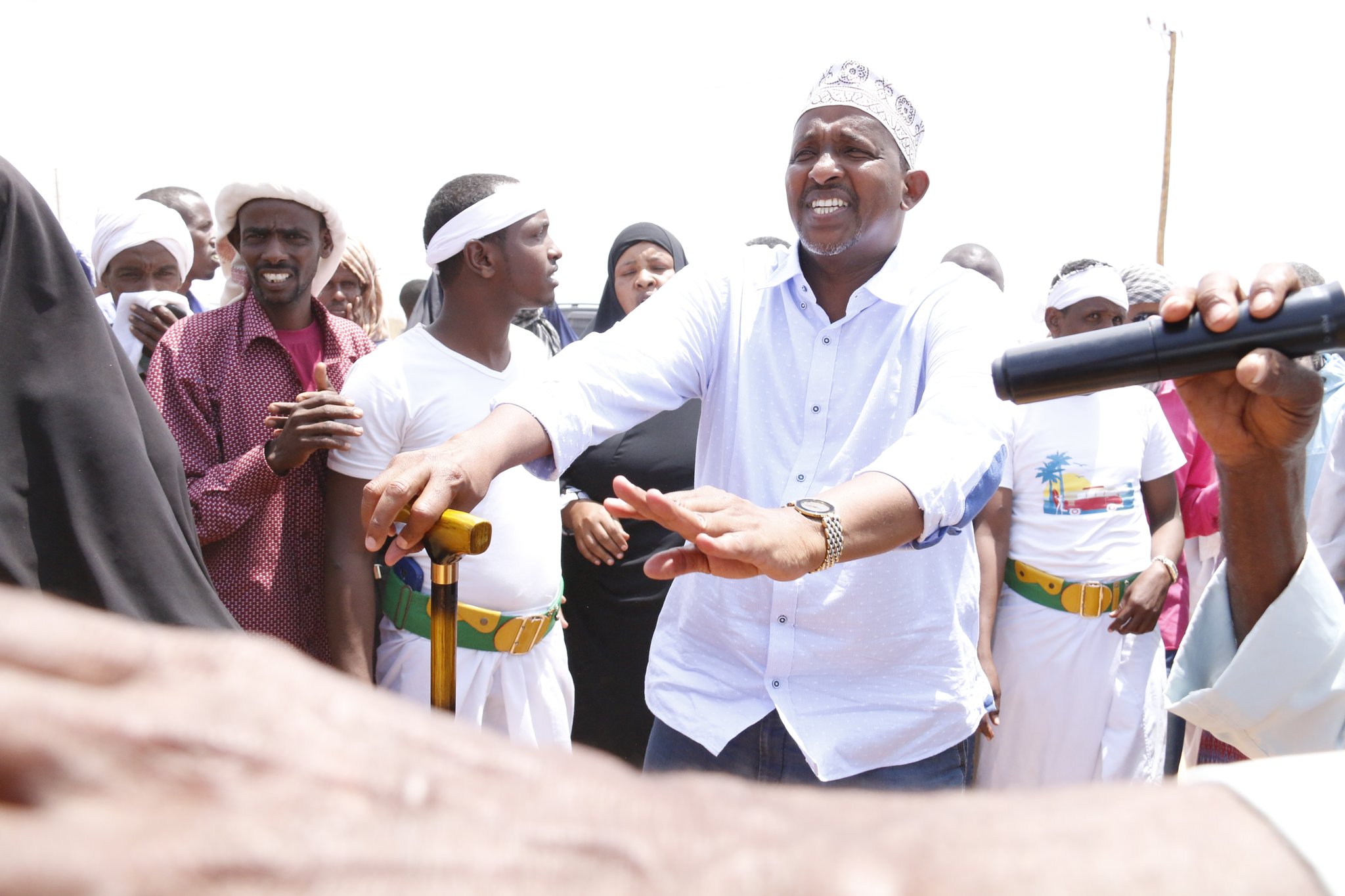 Majority Leader Aden Duale has been on an extensive tour in his Garissa Town Constituency where he’s trying to recapture with Farah Maalim former speaker and an ODM affiliate giving him a mad chase for his money. During his tour, the legislator put up a publicity show on Twitter with trends awash with all the projects he attributes to himself.

It didn’t take long before the trend #DualeDevelopsGarissa was taken over by Kenyans who used it to ridicule his supposed to development projects. Most commentators mocked Duale for taking credits on projects that were even initiated by organizations like the World Bank.

Several residential sources in Garissa, contacted Kenya Insights to reveal some behind the scenes in the development fiasco and the findings are startling. Duale unveiled the five Kilometer Dekabure Rd, but we learn the Rd could have been used to serve personal interest of the MP. The Road as it turns out only serves Duale’s Medina Hospital and ends just 20M from his upcoming estate. Our sources believe, Duale rushed the projects to improve easy access to his new ventures, the hospital, and property which are about 250M apart but lay along the newly constructed tarmac road. Residents are wondering why he didn’t complete the remaining 1.5KM remaining and only to cut it short at his premises.

The contractors preferred by Duale and who also doubles as his business associates only identified to Kenya Insights as Ogle(Mula) and Catalina who supposedly give Duale a 25% incentive on every road contract awarded, are doing shoddy jobs in the constituency. The two are the ones allegedly he awards the contracts. Duale is also being accused of taking a Sh50M from the contractor of the World Bank funded Sewerage Project which was also haphazardly done.

Duale’s upcoming estate metres away from the hospital

Imported democracy in NEP and negotiations have pumped new energy to the scared Duale forcing him to go on a constituency tour overdrive and hastened developments. In this system, Elders sit down and in the process of sharing seats, decide to bring an outside from a different subclan who do not reside from the constituency to be given the MP seat. Someone who has never been in that constituency is made the MP.

So Duale subclan ceded Garissa township MP seat for another subclan… Duale was to move to Balambala CONSTITUENCY to square it out with Abdi K – ODM where he stood to loose.

Upon Realising he had zero chance of coming back, it was tym to splash money as residents tell KI. He bought every influential leader, all the elders, hurriedly started doing some projects like roads, harambee everywhere, donating buses, (things he didn’t do for the past 8 years he was an MP in Garissa)

The Farah maalim candidacy also made him go closer to the people. Residents say they started seeing Duale in Garissa the moment Farah maalim declared interest.

Mbalambala is CORD zone. He couldn’t win against current MP Abdikadir so he negotiated his ways to remain in Garissa Town where the eldersendorsement and tribal card would give him an upper hand against Farah.

Now Duale family amassed enough wealth and are likely to use millions to keep things in their favor – maintain status quo the residents believe.

Kenya Insights allows guest blogging, if you want to be published on Kenya’s most authoritative and accurate blog, have an expose, news TIPS, story angles, human interest stories, drop us an email on [email protected] or via Telegram
Related Topics:Aden DualeOpinionPolitics
Up Next

This Man Governor Joho And The Rich Muslim Voting Block , What Worries Statehouse Most