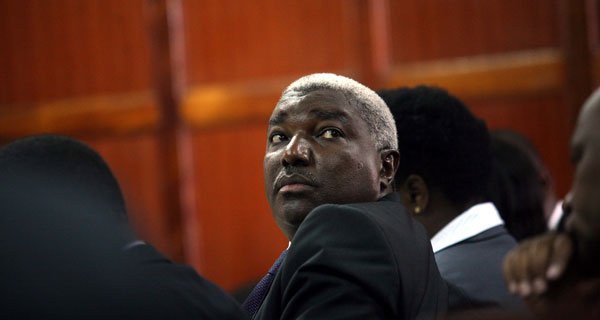 By Nicholas Olambo
The former PS of Foreigner Affairs ministry has announced his quest to contest the Laikipia gubernatorial seat in 2017. Mr. Thuita Mwangi was in the company of his aide, driver and a body gourd when he pulled the overdone PR stunt, entered a food kiosk near the county commissioner’s office for a cup of porridge and mingled with the small crowd.

Pirates spent their ransoms putting up hotels and businesses in Eastleigh, Nairobi, looters of the public funds finance their ways top elective leadership. Mwangi was in March this year acquitted of the Shs 1.6 billion corruption case that involved the procurement of the Tokyo Embassy during the Kibaki regime. Quite a number in the crowds raised an issue with others wanting to know how he is going to change the county.

Known for flouting procurement procedures, Mwangi claims he posses the much needed different style of managing the county and its resources. He is not the only one, other looters and corruption tainted leaders have announced their intentions to run for county top jobs. Ann Waiguru of the infamous shs 791 million, Charity Ngilu who was kicked out of Lands docket over corruption charges and Felix Koskei.

The sacked minister has declared he is in the race to unseat Governor Cleophas Langat of Nandi County in 2017 elections. Koskei illegally allocated sugar import permits and allowed illegal cultivation of 100acre government piece of land where he planted potatoes. He was supended in 2015 and subsequently kicked out by President Uhuru Kenyatta.

EACC, a clearing house for the ‘big fish’ as always found no sufficient evidence to back the claims and throw Koskei to jail. He is now funding his campaigns with corruptly earned money and proceeds of potato sales from the government land. He was fired alongside Davis Chirchir, Kazungu Kambi and Michael Kamau.

Kenya Insights allows guest blogging, if you want to be published on Kenya’s most authoritative and accurate blog, have an expose, news TIPS, story angles, human interest stories, drop us an email on [email protected] or via Telegram
Related Topics:CorruptionNicholas OlamboOpinionPolitics
Up Next

Authenticity Of Duale Development In Garissa In Focus, Constructed Tarmac Road Leads To His Hotel and Estate Only