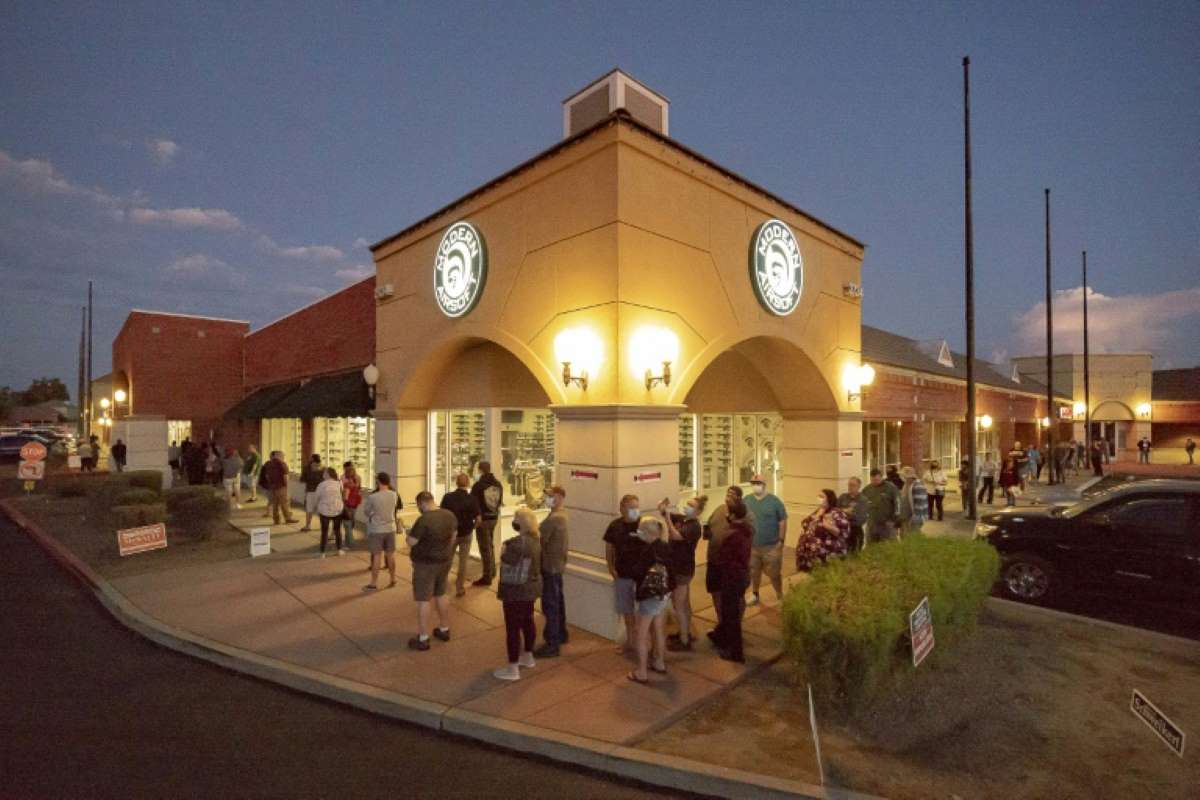 © OLIVIER TOURON Voters line up to cast their ballots at Bell Canyon Pavillon in Phoenix, Arizona on election day -- Trump won Arizona in 2016 but polls show it is now a tossup

Whether she knew it or not, Claire D’Angelo spoke for millions of Americans as she stood in the cold after voting early Tuesday morning, a black mask covering her face.

“To say that I’m nervous or anxious about it is an understatement,” said the 45-year-old restaurant worker who voted for Joe Biden in the city of Easton in Pennsylvania, an important swing state in the election.

“I just hope people come out today and speak their voice for what they want for their children and their future.”

Across the country, Americans formed lines at polling stations to make their voice heard in an election unlike any before in the United States.

Polls opened with the country shaken from the coronavirus pandemic, waves of protests over police killings of minorities and President Donald Trump’s efforts to sow doubt over the counting of votes.

© JEFF KOWALSKYPeople wait in line to vote in Allendale, Michigan on Election Day

The choice they faced was stark, and no matter their preferred candidate, voters were galvanized by the thought that, this year, there is no question that their ballot could make a difference.

© Derek HENKLEVoters arrive to cast their ballots in Kenosha, in the battleground state of Wisconsin, as polls open in the US presidential election

Juan Carlos Bertran, a 60-year-old Cuban-American mechanic, cast his ballot for Trump, naming the economy as his reason — perhaps one of the real estate tycoon’s strongest cards.

Bertran was voting in Miami, Florida, a vital state for Trump to win if he is to capture a second term in office.

“Trump seems better to me for the country’s economy, which is the one that governs the world,” he said.

Clara Gimenez, a 49-year-old who arrived from Cuba in 1980, said that she voted for Trump “because he is anti-communist and because he is a millionaire.”

“He does not need money, nor does he need fame,” she said, wearing a pink hat with Trump’s “Make America Great Again” slogan.

Voters arrive to cast their ballots in Kenosha, in the battleground state of Wisconsin, as polls open in the US presidential election

But for many others, the election was nothing less than an all-out struggle to save American democracy, pointing to Trump’s fear- and conspiracy-mongering along with his failure to strongly repudiate white supremacist groups.

In Trump’s hometown of New York City, one man said he waited 45 minutes in a socially-distanced line to cast his ballot on Tuesday morning.

While more than 100 million Americans opted to vote early, either in-person or by mail, some said that in a year when so much confusion surrounds the election, they wanted to show up on polling day.

That was the case for Michael Murphy in Phoenix, Arizona, which Trump won in 2016 but is now considered a tossup.

“I waited to vote today so that there was no chance that my ballot was going anywhere but from my hand into the machine,” said Murphy, who wore a mask and a t-shirt reading “vote.”

Midwestern states — especially Wisconsin and Michigan — will also be key to any victory, and voters there were out at the polls early.

That included in Kenosha, Wisconsin, the site of a shooting of two anti-police protesters in August and where Trump held one of his five rallies on the eve of the vote.

The Midwest has long had a reputation in the American mind for earnestness, and some voters there spoke of their civic responsibility.

“I vote for every election,” said Sharon Ciskowski, who wore a white mask while holding her daughter.

“I’m also a teacher so I’d like to be a good role model for my kids.”

But she also mentioned one of the many issues that have been divisive ahead of the vote, speaking of the need for “a really good law enforcement community.”

“I would like to see a president that will support our law enforcement,” she said.

How Glo-Jet International Corp Has Benefited From NBAA Membership