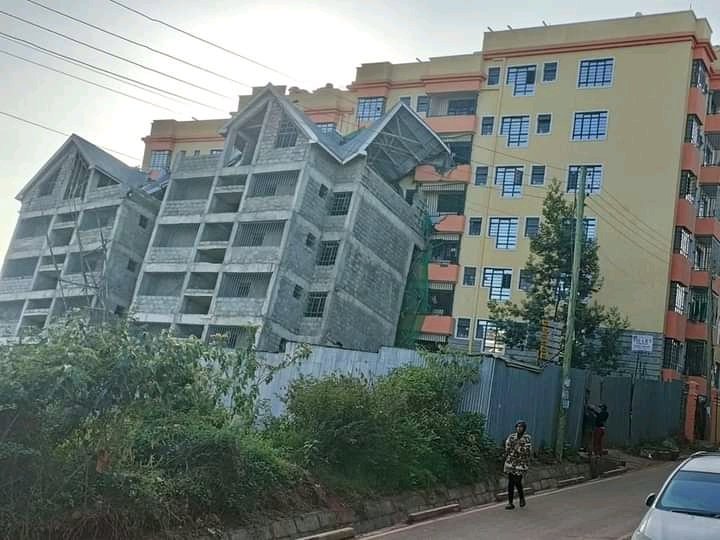 The unoccupied building is resting dangerously on an adjacent six storeyed apartment after its pillars began to buckle at 11.30 pm.

Another residential building under construction in Kinoo on Saturday night nearly collapsed causing panic among residents.

The unoccupied building is resting dangerously on an adjacent six storeyed apartment after its pillars began to buckle at 11.30 pm.

No injuries were reported during the midnight incident. A resident at Crestwood Apartment which is adjacent to the collapsed building and who preferred to remain anonymous said that they heard a big bang Saturday night at around 11pm.

“We were about to get to bed with my family only to be awakened with a loud sound of something collapsing, going to the balcony we were all frightened seeing the building which was under construction nearing to be completed coming down towards our apartment,” She said

Police arrived immediately and evacuated the nearby tenants who spent the night in the cold fearing the building may collapse anytime. No one was injured.

“We are all in panic as we don’t know what will happen next. As much as we need to get our belongings from the house, it is risky as the building might fall anytime,” said one of the tenants.

The Kiambu County inspectorate officers immediately embarked on a crackdown to avert the reoccurrence of similar cases.

Nairobi and Kiambu among other regions are experiencing a construction boom with most buildings going more than six floors.

There are fears some of these structures are being constructed without proper supervision.

A task force was constituted to inspect and approve the construction of buildings in the area.

Related Content:  Fraud: Kisumu County Officials On The Spot For Sparing Tycoon’s Building On Grabbed Land
Many have put blames of buildings collapsing on shoddy contractors, poor and cheap materials, corrupted county officials who approve substandard structures on dangerous grounds to be erected. 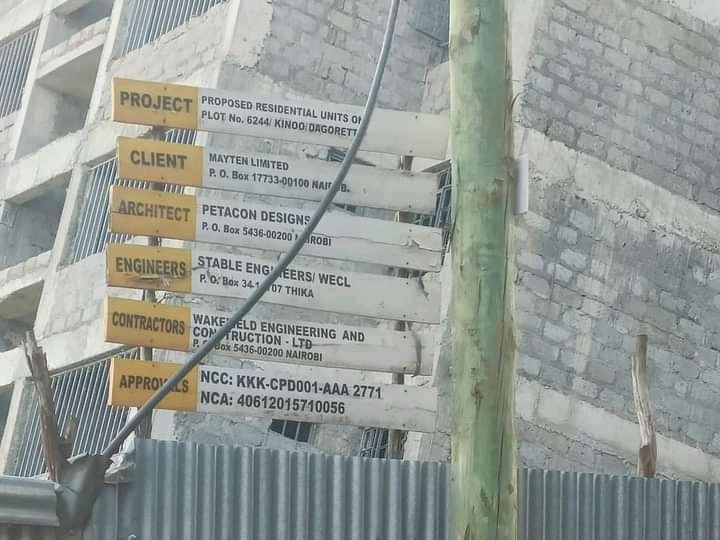 The project is owned by Mayten Limited, the architect for the building is Petacon Designs, and contractors Wakefield Engineering and Construction Limited.

In the past, many buildings erected on mostly riparian grounds have led to preventable deaths and it’s by sheer luck that the Kinoo incident didn’t have casualties largely because the building was incomplete and was completely unoccupied and happened in the dead of the night.

Kiambu County government has ordered the owner of the building that collapsed at Kinoo, Kikuyu Sub County to demolish it within 24 hours.

Speaking on behalf of the national constructions multi-agency, Engineer Anthony Okero said a comprehensive report will be issued in a fortnight when investigations will have been concluded.

The private developer was directed to ensure that the facility is brought down under the supervision of a recognized resident engineer and the county engineers.

According to initial investigations, the building had a weak foundation and substandard material was used to construct it.

Kiambu County CEC of Housing and Land Eunice Mbugua said that the multi-agency team from the County government and National Construction Authority will inspect all buildings under construction to ensure they meet the required standards.

“As the County government of Kiambu, we approved only 4 floors but coming to the site the developer has done 5 floors with a penthouse at the top, we urge contractors and construction supervisors to follow guidelines in the design process of buildings approved,” the CCM expressed.

Related Content:  Mother And Daughter Identified As The Victims Who Drowned In The Likoni Ferry Tragedy

This is the fourth building to collapse in a span of 10 months in Kiambu County.