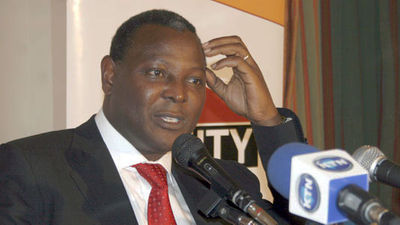 Former President Daniel Toroitich arap Moi on Thursday told the court that Equity Bank chief executive James Mwangi was conned out of Sh300 million in believing that he was selling him a contested prime parcel of land in Nairobi.

Mr Moi, through his advocate Fred Ngatia, said Mr Sunkuli and the lawyer are strangers to him and that he did not authorise the two to sell the property.

Mr Moi said upon learning of the alleged sale of the land, he made inquiries regarding Muthaiga Luxury Homes Ltd’s claim of purchase, and established that Samson Omwanza Ombati Advocate was questioned by Directorate of Criminal Investigations due to the complaint filed by the United States International University-Africa (USIU-Africa).

The 30- acre property in Nairobi, initially owned by Mr Moi, is claimed by Equity Bank boss, the USIU-A and US-based businessman George Kiongera.

The former President reckons he sold the prime piece of land in upmarket Muthaiga North Estate for Sh500 million to Mr Kiongera in June and has never dealt with DPS International.

Mr Ngatia says in court papers that upon being requested to furnish evidence of the instructions from the former President to himself, to act as Mr Moi’s advocate, Samson Omwanza Ombati was unable to present the instructions.

“This was for the reason that Mr Moi had never authorised the said person to act on his behalf in any sale of the property,” Mr Ngatia argues in the court papers.

“Accordingly, Mr Moi did not receive any consideration for the purported disposal,” Mr Ngatia argued.

Billionaire Mwangi claimed he paid Mr Moi Sh300 million for the land in 2012.

Mr Moi said in court papers that at no point did Muthaiga Luxury Homes Ltd hold any discussions with him for the purchase of the said parcel of land, adding, “It is inconceivable that a transaction could have been agreed upon without any consensus by the contracting parties”.

The former Head of State explained that the sale of the land to Muthaiga Luxury Homes Ltd appears to have been a well-orchestrated scheme by Samson Omwanza Ombati Advocate and Mr Sunkuli to divest him of his property.

“Mr Moi to date retains the original certificate of title for the suit property which therefore means the documents used to register a transfer in favour of Muthaiga Luxury Homes Ltd were forgeries,” lawyer Ngatia.

Mr Moi is seeking an order directed at the chief land registrar to nullify the transfer allegedly made by him to Muthaiga Luxury Homes Ltd, dated April 12, 2012 and registered on May 2, 2012.

The case will be heard on December 13.

Kenya Insights allows guest blogging, if you want to be published on Kenya’s most authoritative and accurate blog, have an expose, news TIPS, story angles, human interest stories, drop us an email on tips.kenyainsights@gmail.com or via Telegram
Related Content:  Report: 16 Wealthy Kenyans axed from ultra-rich list by covid-19
Related Topics:equity bankJames Mwangi
Up Next

Fidelity Bank With Sh.217B Assets Base Acquired By SBM Holding Group of Mauritius