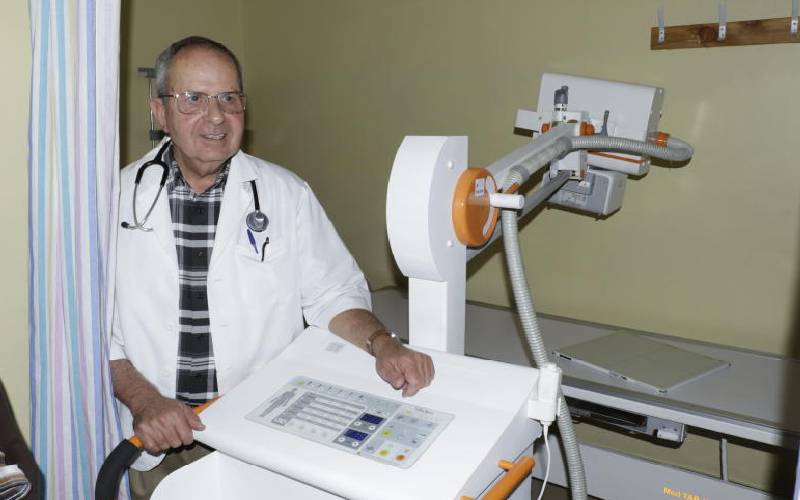 Dr William Charles Fryda, or as locals call him Muzungu wa nyumba, which loosely translates to ‘white kikuyu’ has said he’s too old to give up and used his savings to build a level 3 modernized mission Hospital few meters to the one he lost to Kenyan nun.

Dr Fryda lost the control of a Sh3 billion hospital in Nakuru after a long court battle between him and the Nuns he had involved in the previous project.

For the past seven, Dr Fryda and the Assumption Sisters of Nairobi battled over the ownership of St Mary’s Mission Hospital in Gilgil, Nakuru County and St Mary’s Lang’ata in Nairobi.

In September 2017, the Environment and Lands Court in Nakuru ruled in favour of the nuns leaving the American Priest without hopes of sustaining his dedicated mission.

Dr Fryda has since appealed the matter and even as he awaits the court’s determination on the case, he seems to have never fade up his spirit as he has already set up another hospital about 100 metres from the St Mary’s Gilgil.

Dr Fryda has built a level 3 St Joseph’s Hospital, which he says was named after Mary’s husband in the Bible, a home he says he’s recreating much he lost through the court’s ruling, and taking the competition for patients to the nuns’ doorstep.

“Please don’t take photos of me, I am an old man and my face is no longer attractive,” Dr Fryda jokingly tells SMG’s journalists as he joins the women on the bench for a chat.

Dr Fryda narrated his journey to establishing a second medical facility after losing the first one in the first round in court.

“We appealed against the Environment and Lands Court’s decision and are still waiting for the Court of Appeal to decide,” he says of the matter pending in court.

“We had to start somewhere urgently to help those in need of services as we figure out how to start other facilities,”  Dr. Dra answered why he chose to set up another facility so close to St Mary’s

“The skills remained with us and we chose not to bury them. I, however, hope we will get our facility back,” he says.

“With me is a group of like-minded medical professionals who have after months of soul searching realised the need to have this facility in place. A Kenyan family that I will not name has given me 9.5 acres in Njoro Nakuru County and I will be building another facility there in near future ” he says.

St Joseph’s is a three-storey building, part of what used to serve as a medical school, has been converted into a 70-bed capacity hospital, an x-ray room and an operating theatre.

According to records seen by SMG, the facility has attended to more than 100 out-patients since it opened its doors to the public on Monday last week. The records also indicate that more than 60 patients were attended to on Monday alone.

An American citizen, whose father was a cowboy and mother a teacher, Fryda arrived in Kenya in 1991 with the Mary-knoll Fathers and Brothers.

On whether he is still a Catholic priest and how he relates with John Cardinal Njue after the bruising court battle, Fryda stated that once one is ordained a priest he remains a priest till the day he receives a letter from the Pope for excommunication. Something that he said has not happened to him yet.

“If someone chucks you out of your home into the streets, do you still remain related to them? Fryda is a Catholic and Njue is still his spiritual leader like any other Catholic followers in the country,” he says.

Forget the Catholic battle the old man has been embattled in for almost a decade now. Forget about his sponsors. St Mary’s Hospitals have been helping a lot of Kenyans and many as we all know our health systems are almost dysfunctional if not yet already.

Kenyans are dying in the few death traps the government calls ‘national referral hospitals.’ Cancer is killing poor Kenyans and missions hospitals that are supposed to be pillars of hopes for poor Kenyans are pouring flammables on the already burning menace.

Kenya Insights allows guest blogging, if you want to be published on Kenya’s most authoritative and accurate blog, have an expose, news TIPS, story angles, human interest stories, drop us an email on [email protected] or via Telegram
Related Topics:CourtDr. FrydaNakuruNjoroPriestSt Joseph'sSt Mary's Hospital
Up Next