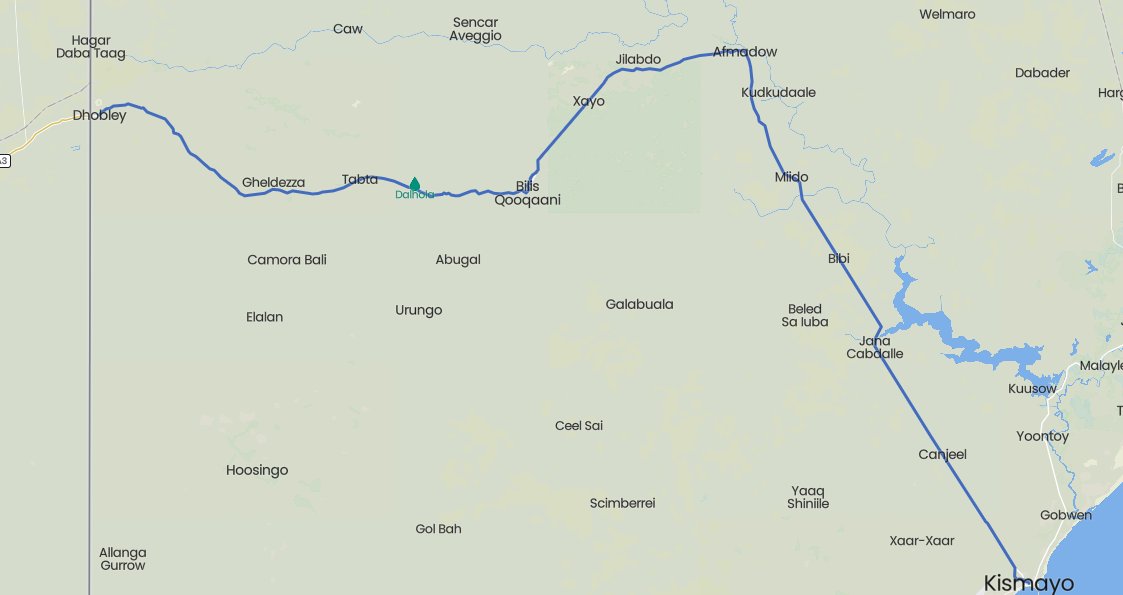 Illicit sugar trade from Somalia to neighboring Kenya could be the highest source of revenue for the Al-Shabaab militants, a report published by the Global Initiative Network suggests, noting the amount of taxation imposed on traders smuggling goods to the East African nation.

In what could be a national security threat to Kenya, it has routinely become possible for smugglers to use the Kenya-Somalia border unnoticed, even as the two countries delay opening the border. Kenya had closed down the border as a mitigation measure for increased Al-Shabaab activities in the northeastern part of the country.

According to the report, the proximity of the port of Kismayo to the Kenyan border – as well as the absence of Kenyan import duties – has made it more economical to import many basic staples and other goods through Kismayo and transport them overland into Kenya.

The study dubbed Terror and Taxes; Inside Al-Shabaab’s revenue-collection machines, shows that about one-quarter of the receipts derived fromthe taxation of vehicles transiting from Kismayo to the town of Dhobley, whose main destination is the Dadaab refugee camp.

For a long time, Kenya has been fighting for the permanent closure of this camp which was first opened in 1992 to accommodate the mass exodus of refugees fleeing the civil war in Somalia, the Dadaab camps now host a population of over 200 000.

The presence of such a dense population concentration close to the border has added additional impetus to cross-border smuggling, the report notes. It is notable that the commercial traffic along the Kismayo–Dhobley route consisted entirely of large vehicles: everyone was a truck.

While minibusses make up over one-third of the vehicle types in the data set as a whole, there were no instances of a minibus transiting from Kismayo to Dhobley. Many of the trucks ostensibly destined for Dhobley in fact proceed across the border into Kenya and the Dadaab complex.

Drivers might be hesitant to declare Dadaab as their destination, out of fear that al-Shabaab officials might view commercial trade with Kenya as collaboration with one of the group’s most implacable enemies.

However, there were a few instances in the data set where the receipt explicitly indicated that the vehicle’s destination was Hagadera, one of the three refugee camps that make up the Dadaab complex, and the closest of the three to the Somali border.

A medium-size truck, for example, will pay US$105 to Jubaland tax authorities for a single journey to Dhobley. Drivers may face further demands for payment at other Jubaland checkpoints, such as Afmadow, Tabda, and Bilis Qooqaani. The burden of this double taxation is ultimately passed down to vulnerable consumer populations in Somalia and Kenya.

However, Jubaland taxation offers a negotiating lever whereby Al-Shabaab might be convinced to reduce its own levies, an idea explored below in the recommendations section.

While the traders smuggle quite a number of goods that are not cheaply available in Kenya, sugar seems to be the main product that most traders seek to import to Kenya from the seaport of Kismayo, the regional administrative capital of Jubaland.

In 2021, for instance, it fell more than one-third short of the total domestic consumption of one million metric tonnes. While some of this shortfall is made up by legal imports, the remainder consists of smuggled sugar, largely from Somalia.

Sugar has been described as ‘the most smuggled good’ into Kenya, accounting for almost half of all recorded smuggling instances in a recent year. The sugar that finds its way across the Kenyan border is typically produced in Brazil and imported into Kismayo via Dubai.

Much emphasis has been placed on the lucrative illicit sugar trade in the previous reporting on al-Shabaab financing. In 2011, UN sanctions monitors estimated that al-Shabaab generated between US$400 000 and US$800 000 annually by taxing sugar destined for Kenya.

A similar UN report four years later concluded that the figure was probably ‘substantially higher. Another study, published in 2015, focused on revenues accruing to al-Shabaab from the sugar and charcoal trade, also highlighting the involvement of the Kenyan security forces and high-level political figures.

Both local and international media reporting has focused on the centrality of the sugar trade to al-Shabaab revenue streams. However, the importance of sugar to al-Shabaab has perhaps been overstated. The report established that indeed sugar accounted for a higher proportion of the cargo transported between Kismayo and the Kenyan border than on the other routes.

Precisely, 18.9% of the vehicles traveling on this route were carrying sugar, which was nearly five times the average observed elsewhere in the data set. However, al-Shabaab taxes sugar at the same rate as generic foodstuffs and mixed cargo. In other words, the group itself appears not to treat sugar as a special category within its revenue-generating operation.

The focus placed on sugar in previous analyses of al-Shabaab revenue has perhaps obscured the fact that al-Shabaab has inserted itself into nearly every aspect of economic life in Somalia. Rather than taxing specific commodities, the group extracts a percentage of the value of the entire illicit cross-border trade between Somalia and Kenya.

Any efforts to disrupt their revenue streams must therefore address this illicit trade as a whole. Nevertheless, Kenya’s protectionist policies still play a role in augmenting al-Shabaab revenue.

By raising the domestic price of sugar, Kenyan tariffs increase the demand for illicit sugar from Somalia, thereby increasing the overall volume of cross-border trade taxed by al-Shabaab. In this light, it might be argued that Kenya’s protection of its domestic sugar industry works at cross purposes to the country’s national-security interests.

The government of Kenya is reportedly preparing to open the Kenya-Somalia border, with Defense Minister Aden Duale opining that security measures have been put in place to put Al-Shabaab at bay. The militants are facing hard times in Somalia following a national offensive that was activated about four months ago.