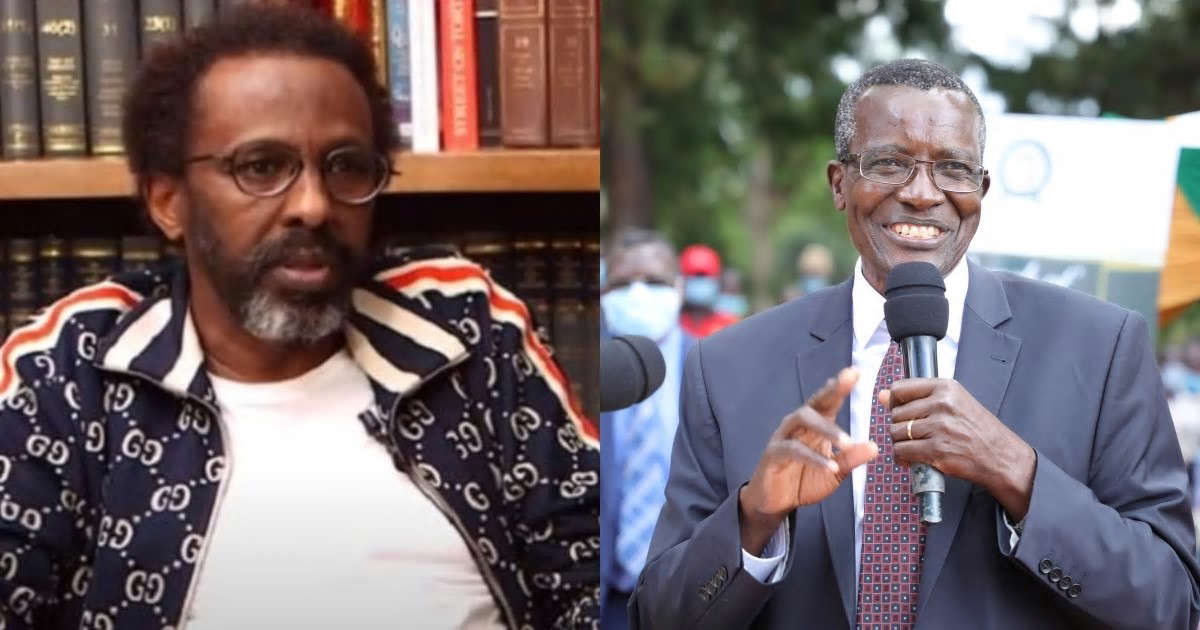 When former Chief Justice David Maraga sued Senior Counsel Ahmednasir Abdullahi for defamation in February this year, he may not have anticipated that he was getting into pigsty fight.

And that is where the wealthy, flamboyant lawyer has taken Maraga in a vicious counter attack.

Nassir has spared no efforts in dragging Maraga right into the middle of the mud, in an affidavit sworn on November 1.

The lawyer has not only reiterated accusations that former CJ condoned corruption in the Judiciary, he claims on several occasions Maraga solicited for favours directly from him, when he (Nassir) served as LSK chairman and a Commissioner the Judicial Service Commission (JSC).

As a show stopper, Nassir drags Maraga’s children into the mucky waters, in his endeavor to prove that the former CJ gave his family a lifestyle that was beyond his means as state officer.

Maraga filed the defamation at the High Court in Nairobi in February claiming Nasir had defamed him by accusing him of shielded a Supreme Court judge who allegedly received a Sh220 million bribe to make a favorable judgement.

The tweet was posted only days after Maraga retired as CJ on 12th January 2021.

The tweet read, “If CJ Maraga is a decent and honest Kenyan, he should come clean on the issue of the SENIOR judge of the SUPREME COURT who took Sh220 million BRIBE. Me and CJ Maraga know the judge… intelligent Kenyans must read A LOT on Maraga’s astute silence on this matter!”

The tweet attracted 565 comments, 381 retweets and 2,500 likes from his followers, said Maraga’s lawyer.

The retired CJ argued that the post had caused him anxiety, painted his name in bad light having worked in the Judiciary as a judge of High Court, Court of Appeal, and Chief Justice and President of the Supreme Court.

Nasir has responded with an 8-page affidavit, containing 48 paragraphs of averments. It’s an affidavit that goes way beyond what lawyers would describe as a conventional affidavit. It’s more like submissions or a defence statement intended to completely vanquish Maraga’s allegations.

Nasir says after the unnamed Supreme Court judge had received the Ksh220 million bribe, the judge took a draft judgement to the bribing party and promised a favorable judgement which he (Nasir) has seen and read.

The judge then shared the money with two other Supreme Court judges at a house in Karen, Nairobi.
The judge however ruled against the party that had given the bribe and the briber demanded a refund.

“He initially refused to refund unless the other two judges paid their share but eventually he agreed to pay. To date he refuses to pay back the bribe and continues giving excuses,” the lawyer says, indicating the culprit was a male judge.

Nasir Says the judge agreed to sell a farm he owns in Nyandarua which he is presently disposing of for Ksh330 million. He has paid 10% to his lawyers who have offices at I&M Building.
“To date he has not repaid the Ksh220 million,” he adds.

Nasir says in 2020 he posted many twits about the Ksh220 bribery and even tagged Maraga for necessary action but the CJ never took action.

The Plaintiff had a constitutional and statutory obligation to investigate the matter that I numerously tweeted about. In his capacity as CJ he was required to play vital role in the fight against corruption.

If CJ Maraga is a decent and honest Kenyan, he should come clean on the issue of the SENIOR judge of the SUPREME COURT who took Kshs 220 million BRIBE. Me and CJ Maraga know the judge…intelligent Kenyans must read A LOT on Maraga's astute silence on this matter!

Going personal on the former CJ, Nasir says Maraga loves a lavish and expensive lifestyle well beyond his financial means. His salary as a public officer did not reflect his lifestyle.

The lawyer then attached over 30 pages of fees structure for all the institutions attended by Maraga’s children.

Nasir says Maraga has a history of soliciting favours. He says when he (Nasir) was elected LSK chairman in 2003, he and other council members visited Nakuru and met Maraga who was in private practice there.

That was the time when radical surgery in the judiciary was at the peak. “Following his strong solicitation and constant lobbying we included him in a list of 35 lawyers and was appointed Judge of the High Court in 2004,”

Nassir says during the vetting of judges in 2011 Maraga called him at mid night to save his skin.

“The plaintiff called me out of the blue in the middle of the night following his vetting by the Vetting Board, crying loudly. I remember the plaintiff was literally shouting: “please help me my brother, my career is over, I am finished, please Nasir…” The plaintiff then begged me to lobby Commissioner Abdullahi”

Nasir does not stop there. He says, “When the Plaintiff applied for promotion to be appointed judge of Appeal, I met him while I was in the company of my wife. He pleaded with me to look into his application favorably. After the Plaintiff was appointed, he made lunch for me and another commissioner and served us a mean of chicken, Ugali and Sukuma at his home in Karen”

Nasir says though he posted the controversial tweet, the same was published by Twitter Inc, a company headquartered in San Francisco, California, USA

He says the company enjoys immunity against libel suits in America and Europe hence Maraga cannot maintain his claim against him since he is not the publisher.

Nasir says Maraga is too thin-skinned and has a history of being haunted by allegations of corruption during his career in the judiciary. He is continuously overly sensitive to fair comments and innocent criticism about him as judge in particular and the judiciary in general.

Kenya Insights allows guest blogging, if you want to be published on Kenya’s most authoritative and accurate blog, have an expose, news TIPS, story angles, human interest stories, drop us an email on [email protected] or via Telegram
Related Topics:Ahmednasir AbdullahiDavid Maragadefamation suit
Up Next

NHIF CEO Kamunyo On The Spot Over Questioned Sh400M Cash