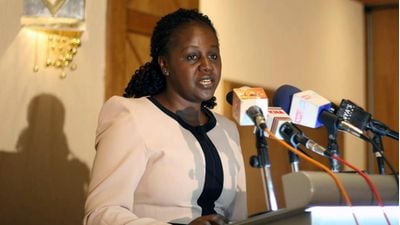 The State Department for Correctional Services paid close to Sh1 billion to contractors who supplied air between 2014 and 2018.

Correctional Services Principal Secretary Zainab Hussein admitted to MPs that the Sh1billion included Sh555.6 million paid to suppliers who did not deliver any goods or services to the prisons and another Sh419.97 million which was an overpayment to suppliers.

The department made the overpayment of Sh419.97 million against supplies amounting to Sh190.3 million yet total payments captured in the integrated financial management information systems (IFMIS) amounted to Sh610.3 million.

Hussein who appeared before the Public Accounts Committee (PAC) chaired by Ugunja MP Opiyo Wandayi said the department is in the process of sorting out the matter to ensure that such instances do not recur.

When asked by the committee members whether some individuals were out to defraud the department, Hussein responded in the affirmative; “yes, you can say that because some of the goods were not supplied.”

The PS who had appeared before the committee to respond to audit queries relating to the 2019/2020 financial year revealed that the State Department is yet to clear pending bills amounting to Sh1.9 billion as they were still scrutinizing the payments.  Of the Sh1.9 billion, Sh146.97 million were claims on the National Treasury list but not declared in the Prisons returns.

Hussein said that out of the Sh6.3 billion pending bills, the department has so far paid Sh2.8 billion out of the total payables of Sh3.6 billion.

“With regards to historical pending bills, yes the National Treasury has been supportive and has given us money. When it comes to payments, we have prioritised the small suppliers. All these pending bills are as of June 30, 2018 going backwards. From the financial year, 2018/2019, we do not owe anybody any money,” she said.

But immediately she was done, committee members ordered her and officers from the Auditor General seconded to the committee to submit by Wednesday next week a list of those individuals who pocketed the millions yet they never made any supplies.

“Here are my orders, let’s get the two sets of the list from the PS and the Auditor General in one weeks time, that is Wednesday next week. Let us know the characters who pocketed money by selling air, please give us the names, no semantics so that we can deal with them,” said Wandayi.

He added: “ With what we have heard it is possible that there was a loss of about a billion plus shillings actually Sh926 million went through the prison system irregularly, this clearly shows that some people tried to defraud the prisons department.”

Garissa Township MP Aden Duale echoed Wandayi’s sentiments saying as a committee they need the list of suppliers who were paid and never supplied anything.

“We need to get the list of suppliers who were paid but supplied nothing as well as we need to know the stations that were affected,” said Duale.

Her response comes after Auditor General Nancy Gathungu in her report revealed that payments totaling to Sh555m were made at the State Department`s Headquarters on behalf of various prison stations but a verification of the payment vouchers at the stations revealed various irregularities.

Gathungu said the irregularities include suppliers being paid yet they did not make any supplies, there were unverifiable payment vouchers while some suppliers paid at the headquarters were not known to the stations.

Kenya Insights allows guest blogging, if you want to be published on Kenya’s most authoritative and accurate blog, have an expose, news TIPS, story angles, human interest stories, drop us an email on [email protected] or via Telegram
Related Topics:Correctional Services Principal Secretary Zainab HusseinState Department for Correctional Services
Up Next